The observant amongst you may have noticed and even (hopefully) read the blog I posted from MSc students at Queen Mary University of London after they had completed an electrofishing survey with me as part of a training exercise. Each year, at the same time, a cohort of Freshwater & Marine Ecology students ‘(re)samples’ Woodplumpton Brook where I have been working with Wyre RT to improve the watercourse habitat and connectivity. Well, two of the most recent students were so enthused by the experience and some of the work that I do at the WTT that they have signed up to complete their MSc projects under my supervision and with Dr Chris Eizaguirre (QMUL).

Both of the projects I will outline below have actually been in existence for a while, and both use my academic expertise in stable isotopes. Stay with me! Each is in partnership with other organisations, and so the students will benefit from work experience outside of the purely academic arena, as well as from developing an extended network of contacts which may well be useful further down the line at job-hunting time! 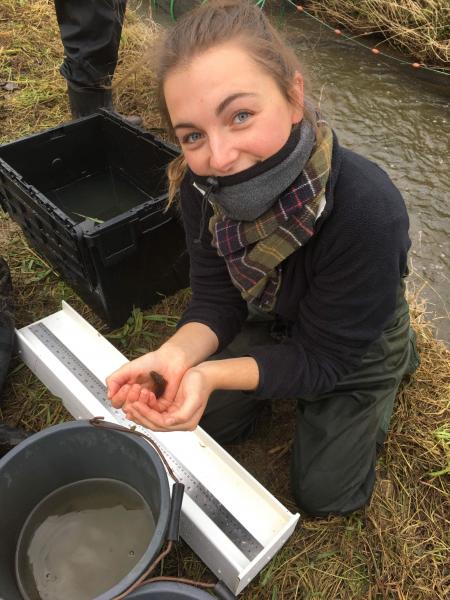 With the Ribble RT, I initiated a project to use stable isotopes to characterise foodweb change at the relatively small scale of a ​‘restoration’ intervention; a previous blog gives more details of one site on the River Calder in Towneley Park, Burnley. To determine change in the foodweb in response to the intervention, we need to use a BACI design: Before and After at Control and Intervention sub-sites. Tim Eldridge, with whom I worked on the trout of Malham Tarn (the very first WTT blog), helped out with the initial sampling and field collections prior to any works commencing.

Now, Charlotte Pike (left), a graduate from the University of Portsmouth, will collect all the post works samples from Towneley, and another site on Bashall Brook where a riparian buffer strip has been established on a bank formerly degraded by livestock grazing and poaching. All aspects are funded under the RibbleLife Project (Heritage Lottery).

The other project is to establish whether large trout from watercourses in various eastern counties that are not noted for their trout populations, are actually sea-trout or whether they are simply clever river resident trout eking out an existence, extremely efficiently, under the radar. This is a more convoluted project in terms of the partnership and I’m ably helped out by my colleague Tim Jacklin with this. Various Environment Agency staff have helped to coordinate collections of river invertebrate and estuary invertebrate reference samples, and in addition, are coordinating local anglers to perform a ​‘citizen science’ role in catching these large fish. Tough job eh? They make notes on capture regarding length, weight etc, and carefully collect some scales from each fish which we can use for analysis of stable isotopes. This work has emerged from The Welland Sea-Trout Project. 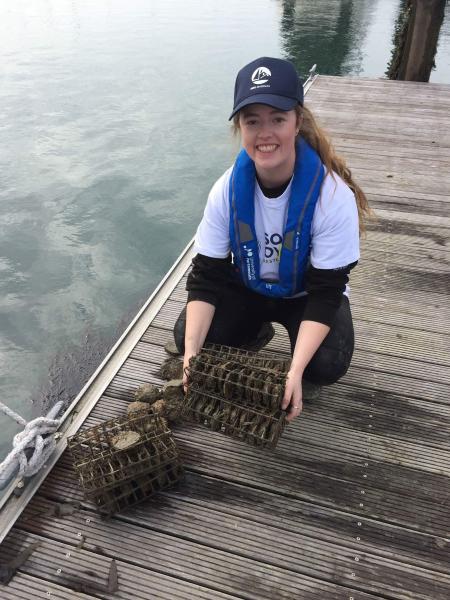 Another aspect to this project is being coordinated by Dr Adam Piper at the Institute of Zoology with help from the Zoological Society of London, Environment Agency, Atlantic Salmon Trust, River Glaven Fishing Association, Norfolk Rivers Trust, and of course WTT. Again, it is a ​‘trying to ID sea-trout or not using stable isotope analyses’ type question but specifically looking at the contribution of sea-trout from small streams to the wider stocks. Abbie Nye (right), also a University of Portsmouth graduate, will be taking up this challenge for her project.

Since I covered many of the fieldwork skills that Charlotte and Abbie will require for these projects on the MSc module I contributed to prior to Christmas, they should be able to hit the ground running. Currently, they are receiving some training in London from my PhD student on the statistical packages they will need to analyse the isotope data, and soon they can start processing the pre works samples and learning the dark arts of Continuous Flow Isotope Ratio Mass Spectrometry (!), before moving onto their own samples.

From here on, I’m going to leave updates to them, so watch this space.