We think the native brown trout Salmo trutta are amazing and worth preserving for future generations.

They are an indicator of the health of a river or lake, and where they thrive you can be sure that other wildlife will thrive too. Many people are surprised and delighted to see trout in rivers in city centres or tiny mountain lakes, and we hope that seeing trout means they will value them and the places where they live.

Trout show remarkable variety and adaptability. It was originally thought that what we know today as Salmo trutta in the UK was 50 different species, because trout vary so much in appearance, size and habit. Analysis of genetics has shown there is only one species (i.e. all trout can interbreed with all other trout) but there is huge genetic variability even within the same river. Sea trout, ferox trout, dollaghan and gilaroo are just some of the more obvious trout variations, but research has shown that on the River Dart in Devon, for example, there are at least 22 genetically distinct breeding populations.

A typical wild trout from the River Eden in Cumbria

Although they are very different in appearance and lifestyle, brown trout (above left) ferox trout (above centre) and sea trout (above right) are all the same species: Salmo trutta.

This enormous diversity means that trout have a gene pool that makes them remarkably adaptable to available habitat niches. As our climate changes and rivers and lakes are affected by our actions like abstraction and nutrient enrichment, this adaptability will help trout to survive. And it may give us more clues as to how species can adapt to a changing environment.

How did this diversity arise?

13,000 years ago, most of the UK was covered in ice. As the ice retreated, trout from five distinct lineages spread from the rivers of Europe and started to take up residence in the new, ice free rivers in the UK. They were able to do this because brown trout can adapt to salt water and become sea trout. When they found suitable (empty) habitat, they stayed. Some retained their sea trout habits and continue to breed in rivers but feed at sea (they are, like salmon, anadromous). Others became resident brown trout. Over time, populations became separated or specialised and developed the genetic diversity we see today.

Brown trout have been domesticated by fish farmers both to provide food and for supplemental stocking for angling. Domesticated brown trout have been selected to grow quickly, spawn early and cope with the (for them) highly unnatural situation of being surrounded by other trout. They are different in appearance and behaviour to wild trout, but can interbreed with them. This is not desirable as their progeny are not as fit for life in the wild as truly wild trout. To understand more about the impact of stocking farmed fish, click here.

Rainbow trout are not native to the UK, but have been imported from America both for angling and food. They have not naturalised in the UK (we are not really sure why not), with the sole exception of the River Wye in Derbyshire where rainbow trout were introduced in the late nineteenth century and have bred successfully. The Wye now has both brown and rainbow trout.

Where and how can I see trout?

Trout are not present in all rivers and lakes, but they are very widespread. In general terms the upper reaches of rivers are often termed the ​‘salmonid zone’, where trout, salmon and grayling are likely to be found Theses species need water that is relatively cold and clean with gravels areas for spawning. The middle and lower reaches of rivers are where you will find ​‘coarse’ fish such as roach, rudd and barbel as they tolerate higher temperatures, poorer water quality and do not necessarily need gravel to spawn. This is a rather broad generalisation as you will find trout the lower reaches of many rivers and they will migrate considerable distances to find gravel to spawn. Cool, clean lakes and reservoirs, spring fed streams and the upper reaches of many rivers will hold trout.

Two things will help you to see trout – a bridge and polarised sunglasses. Trout will ​‘hold’ with their noses pointing upstream, watching for food drifting past. Typical places you will see trout are under bridges, in front of or behind rocks or pieces of wood or weed, under overhanging vegetation. If there are insects on the surface, trout will ​‘rise’ to eat them, leaving tell-tale rings on the water. In rivers, trout will very rarely be in a group so look for a single fish. Often the thing you will first notice is a waving tail, or the vertical line of the tail.

Trout are very wary, and all you may see is a flash of a trout swimming away very quickly as they have spotted you before you have seen them!

The tell-tale rings of a rising trout 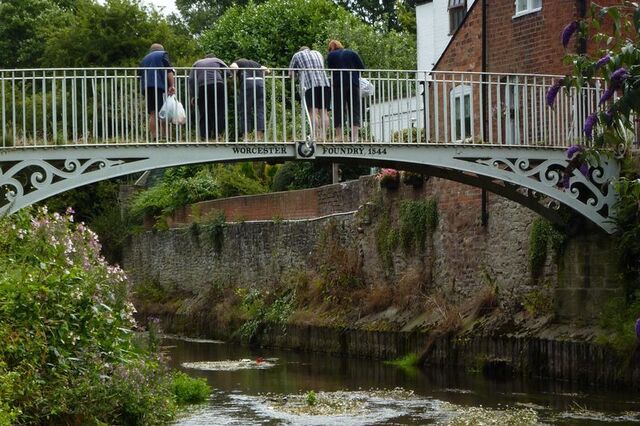 Bridges are great places for spotting trout - even in towns

Trout generally spawn and go through their very early life stages in streams or rivers that feed into lakes rather than in the lake itself. Trout move into the lake as adults and, unlike river trout, will move around to find the best sources of food and shelter.

They are much less territorial than river trout and will be found in groups close to a good source of food, such as hatching invertebrates. They do like the security of ​‘structure’ even in a large lake, and will seek out rocky promontories, sunken logs or tree roots both for shelter and because they are sources of food. However, they remain ​‘tied’ to the streams and rivers that flow into the lake, for it is there that they will spawn when mature. In some very large lakes (like the huge Irish Western Loughs), there are separate, genetically distinct sub-populations of trout sharing the same general water, yet going their own way to spawn in particular areas and at particular times of year.

Trout feed primarily on invertebrates that live in the river or lake, or drop on to the water from trees and plants on the banks. Some favourite trout food includes the freshwater shrimp (Gammarus), members of the mayfly family Ephemeroptera), caddis flies (Trichoptera) and stone flies (Plecoptera). 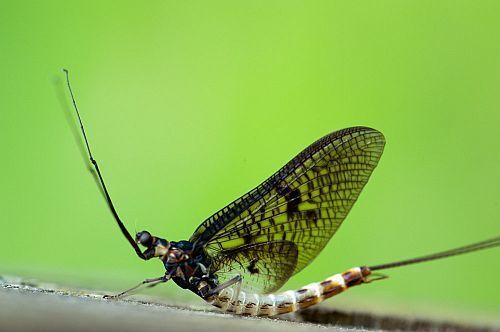 An adult mayfly - a good meal for a trout

Trout eat riverflies in the aquatic stage of their life (nymphs), as adult flies from the surface of the water and as they move between these life stages through the water column. The classic surface ​‘rings’ that are the easiest way to spot a trout in the water are caused by the trout eating insects from the water surface.

Many aquatic invertebrates need clean water and food in the form of vegetable matter (plants or decaying wood and leaves) or possibly other invertebrates. They are an important part of the river or lake food chain.

Trout are opportunists and will feed on anything edible that drops in the river – daddy long legs (crane flies), aphids, ants and other insects are an important source of food especially in rivers which are not very productive for river flies. Many of our more acidic upland rivers fall into this category. 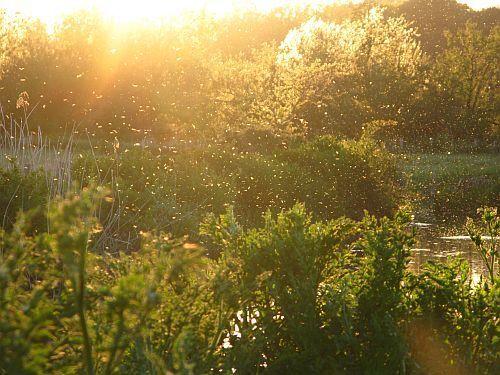 A 'hatch' of river flies. When these fall into the river, they provide a feast for trout

Trout will also feed on crayfish and on other small fish. Some trout will become very large and feed almost exclusively on other fish — these are called ​‘piscivorous’ trout. Ferox trout are a very large form of trout that have an almost exclusively fishy diet in freshwater, often arctic charr. Sea trout will feed on fish such as sand eels in the marine environment and also grow large on this protein rich diet. 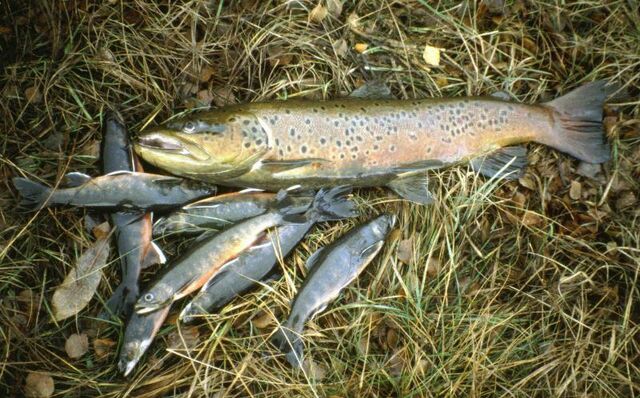