The quantity of water in a lake or river defines the amount of space that trout can inhabit. It is easy to recognise that less water means fewer trout, but less water also means that water warms up more quickly. Warm water holds less oxygen, leading to more stress on trout and ultimately to dead trout.

Less water also means less dilution of pollutants, so a contamination incident in high flows may not be a problem, but in low flows the pollutant can reach critical levels of concentration and kill trout and the fauna on which they feed.

Low flows also cause silt to be deposited. This is a natural process and deposition of silt in some areas of the river is part of the normal mix of habitat. However, long periods of low flows can lead to a build- up of silt which would naturally be removed by periods of faster flow. This can cause problems, for example when spawning gravels become clogged by silt.

Chalkstreams are a habitat almost unique to the UK and are found in a band from Lincolnshire and Norfolk in the east to Dorset in the west. Their crystal clear water bubbles up from springs in the chalk and creates a rich aquatic environment, but abstraction of water from the chalk aquifers threatens the health — and even the existence — of many of these rivers. 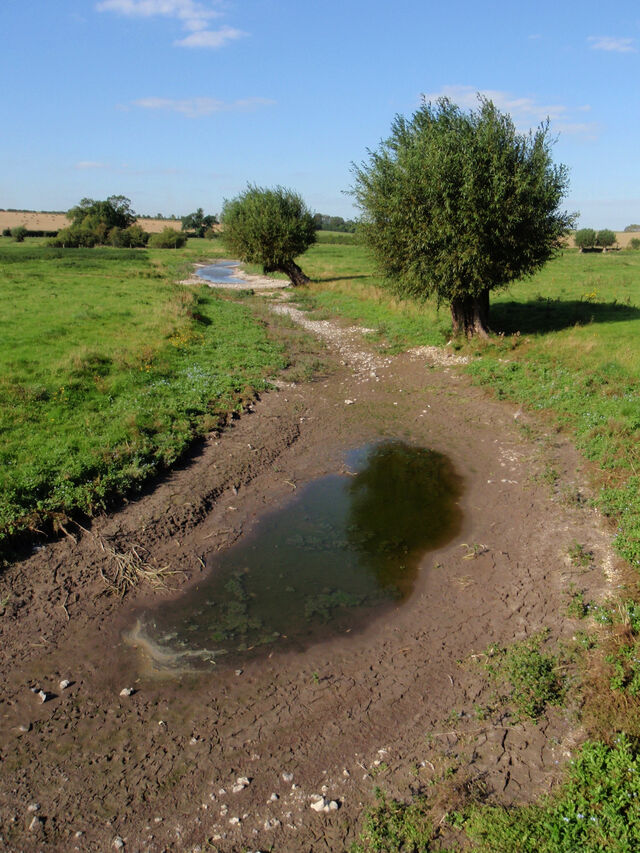 A dry chalkstream - the result of ground water abstraction.

Too much water, in the form of flooding, is much less of an issue, as long as trout can find refuges in side streams or slower flows in the river margins.

Some periods of flooding are beneficial as they scour out silt, introduce fresh gravel and create a fresh supply of woody debris.

Excessive ​‘flashiness’ or frequent and very rapid rises and falls in water level are often caused by mismanaged drainage or land use that alows rainfall to run off the land very rapidly . This is a problem which results in excessive erosion as well as flooding. 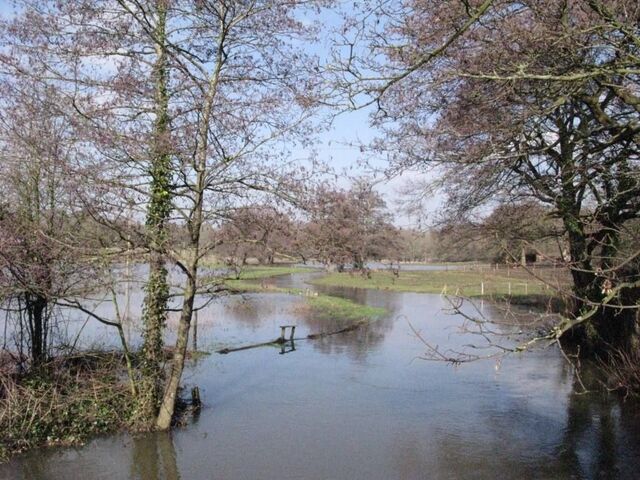 Winter flooding on the River Meon

Legislation over the past 30 years has meant that the amount of point source pollution from industry has reduced enormously. In many cities and industrial areas, the quality of our water has never been better and this is good for trout, sea trout and salmon.

However, there are still issues with water quality.

Diffuse pollution from farm land is less visible than ​‘point source’ pollution but it is a significant problem as it allows excessive nutrients (nitrogen and phosphorous) and pesticides to enter the river. Excessive nutrients, especially phosphates can cause algal blooms especially during the spring if bright sunshine is combined with low flows. Spring algal growth in chalk streams and can suppress the growth of other valuable water plants such as ranunculus, which support invertebrates including the blue winged olive — vital food for trout. 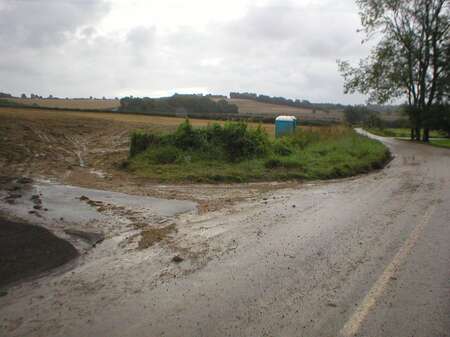 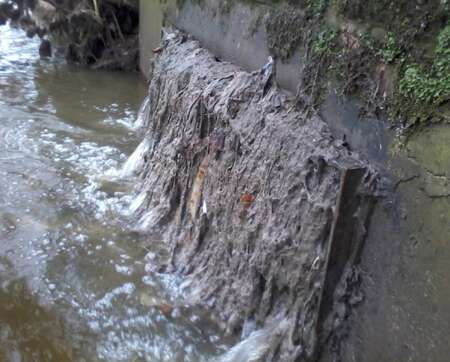 Farm tracks can be ​‘sediment pathways’ — a route for soil to wash off fields and enter the river during periods of heavy rain.

Some silt in a river is natural and desirable. The most iconic river insect, the mayfly Ephemera danica, needs silt as the nymph stage burrows into the mud and eats detritus.

Nevertheless, too much silt is a major problem, especially when combined with low flows, as it is not flushed down-river and out to sea. Silt should naturally be deposited on the inside of a river bend and on the roots of plants where water velocity is slower. In rivers with straight channels and homogenous flow patterns, silt can be deposited evenly over the river bed causing changes in invertebrate life and suffocation of trout eggs in spawning gravel.

Excess silt is also a form of pollution. Silt will often contain organic matter which uses up oxygen in the water as it decays. Moreover it can hold other pollutants such as heavy metals. Too much silt smothers plants, invertebrates and trout eggs. Our rivers have suffered from increased silt loads largely because of the changes in farming practices. These have left fields with less vegetation and more bare soil during the autumn and winter, which means that the soil is easily washed off during heavy rain.

Raw sewage, slurry or other organic pollutants in a river will reduce the amount of oxygen in the water. Depending on the amount of pollution and the duration, the loss of oxygen will kill invertebrates and fish. Organic pollution is also smelly, carries dangerous bacteria and will smother the bed of the river with algae (often called sewage fungus).

There are also more insidious problems, for example the presence of hormones in treated sewage water that affects the sex of fish, and microplastics accumulate in living organisms.

By ​‘habitat’ we mean the physical environment where trout live. The two building blocks of habitat are:

Over time, a river may change it’s course, bank-side trees will die, lakes will fill with silt and become marshes. These are natural progressions and mean that the type of habitat evolves over time. Only human intervention seems to degrade or destroy habitat so that it is less fit for wildlife!

Some of the most common ways that habitat is damaged are:

Many rivers were dredged, straightened, cleared of trees with banks built up so that they became like canals with none of the variation in depth or width of a natural river. This was done in the (often mistaken) belief that the faster flood water could travel out to sea, the less flood damage would occur. This video shows the unintended effects of dredging using the Emriver modelling tool. 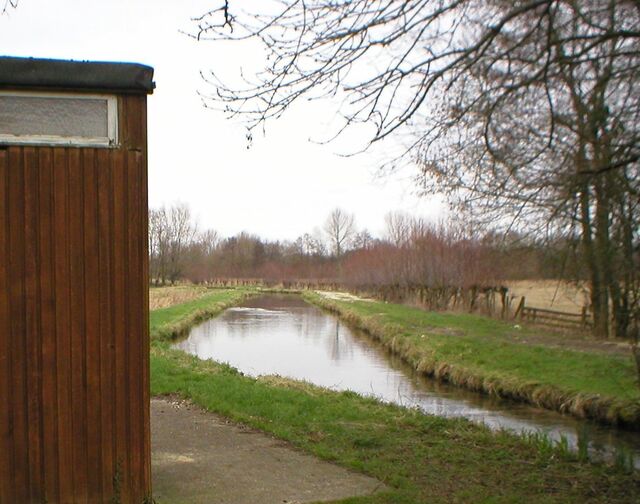 Canal-like rivers provide very poor habitat for trout and many other fish, because they lack the essential variation in habitat that supports different life stages – gravels for spawning, shallow areas for juveniles and cover to hide from predators.

Modern flood risk management, often called natural flood management or NFM, recognises that the natural process of allowing rivers to over top the banks and spread over the floodplain is much less damaging (unless, of course, you happen to have a house on the floodplain). It helps prevent the destruction caused by a large body of fast-moving water hitting a bottleneck such as a bridge. Natural obstructions in the river such as trees and rocks and even grasses and shrubs on the banks all help to absorb the energy of flood water and reduce its destructive power. Many flood management projects now include ​‘slowing the flow’ of rivers, one example is the Pickering Beck in Yorkshire.

Many fish that spend their entire life within a river still need to move between different types of habitat at different stages of their life-cycle. This behaviour is something that most would associate with salmon or perhaps sea trout — but you might be more surprised by the lengths that other fish will go to in a desperate attempt to reproduce.

Fish that try to move upstream often encounter barriers (both natural and man-made) and their naturally evolved tactic is to find the point at which the majority of the flow passes over or through the structure. This flow often gives away the location of the lowest point of a barrier and is called ​“attraction flow” since migrating fish are drawn towards it.
For many constructed weirs, the instincts of the fish can lead them to repeatedly throw themselves against immovable stonework. Injuries, exhaustion and perhaps the loss of the opportunity or ability to spawn are the unfortunate consequences.

There is more information about the effects of weirs, culverts and other barriers on our library page.

Damage to river banks is often caused by ​‘poaching’ (trampling) of livestock, but it can also be be brought about by dogs jumping in to swim!

Damage occurs when the pressure on the banks by animal or human feet is too high. Vegetation on the bank will help hold it together, but if this is grazed down, and the soils are naturally soft, then the bank will collapse into the river. This results in more silt entering the water, and in the river becoming wider and shallower than would naturally be the case. If this occurs over a short stretch of bank it is not a problem, but a long length of river, with banks damaged in this way will not support trout, nor much other wildlife. 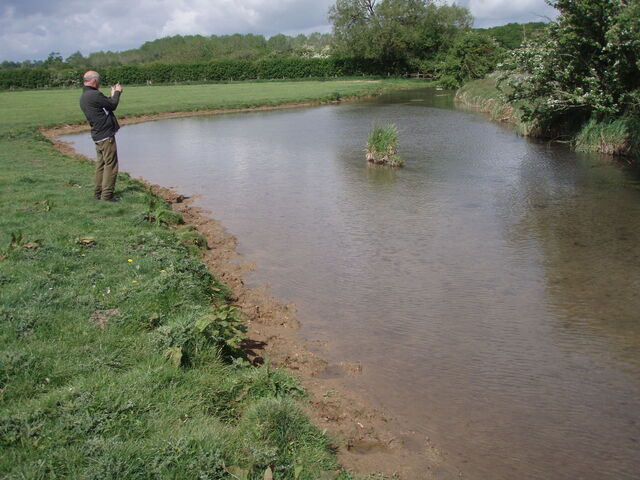 River banks poached by livestock result in an over wide, silty river.

The invasive species that cause the most habitat damage for rivers are Himalayan balsam, Japanese knotweed and American (signal) crayfish. None of these is native to the UK and all have driven out native species and caused damage to river banks.

Himalayan balsam spreads rapidly by seed and successfully out-competes our native bank-side plants, so the river margins become a monoculture of balsam. This gives much less variety of habitat for insects, and bees will preferentially feed on nectar rich balsam and may fail to visit and propagate other flowers. It also leads to banks becoming vulnerable to erosion because Himalayan balsam is a shallow rooted annual plant. During the winter it dies off, leaving exposed soil that can be washed away by rain and flood water.

Japanese knotweed propogates via rhizomes in the soil, so it spreads slowly but is very hard to eradicate. It out-competes other plants and, like Himalayan balsam, leads to an insect-unfriendly mono culture. Its roots are strong enough to break through concrete, so it will damage any structure such as bridge or weir foundations.

The Environment Agency produce a very good guide to these plants and their control. Click here to download a copy.

Signal crayfish carry a plague that kills our native white-clawed crayfish, which are now surviving in only a few places, for example the Eden Valley in Cumbria and the River Allen in Dorset. Signal crayfish burrow into river banks and can undermine them until they collapse, leading to over wide rivers with excess silt. Some rivers, such as the River Kennet in Berkshire, have signal crayfish in very large numbers. 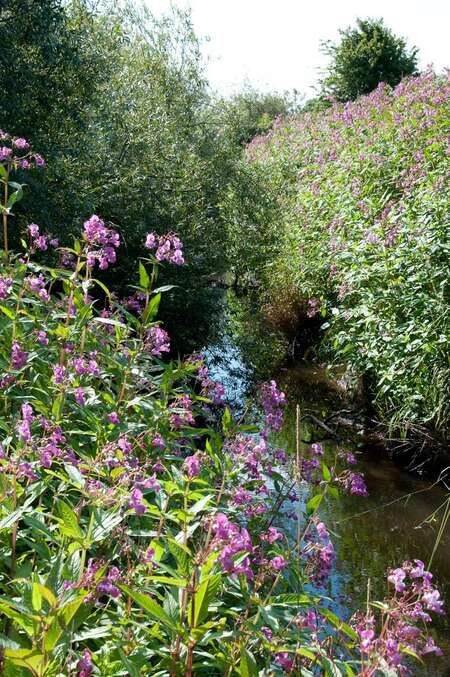 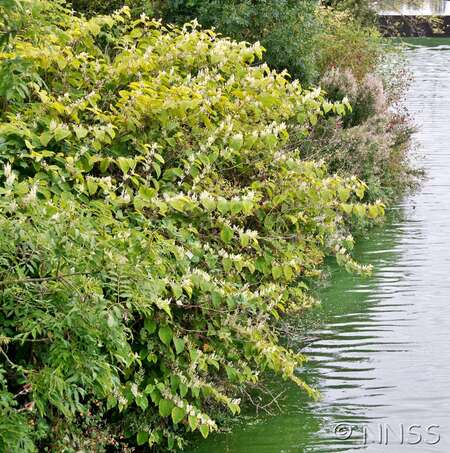 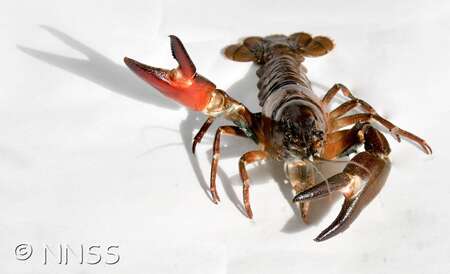 Rivers have been managed by man for thousands of years and there are few, if any, truly natural rivers in the UK. Even rivers in mountainous areas have been changed. They are now more ​‘spatey’ because the tree cover on the mountains has been removed, moorland has been drained with ​‘grips’ to improve the pasture for sheep or coniferous plantation created, leading to acidification. 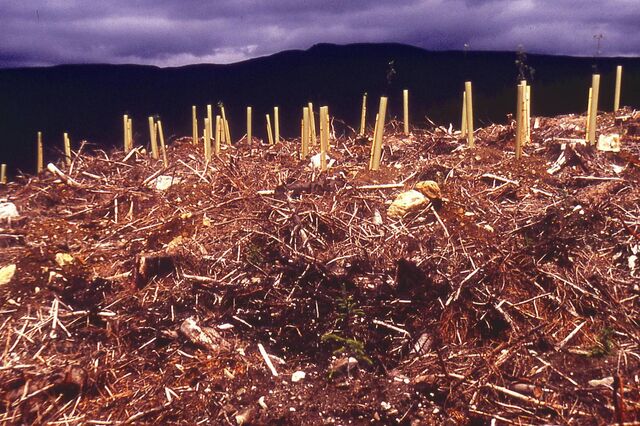 Similarly chalk streams have been managed since Roman times – their natural course changed, confined in steep banks and divided into multiple channels to create water meadows.

Rivers have also been a source of power for centuries. Mills and their associated weirs, leats, hatches and mill races have fundamentally changed how a river works 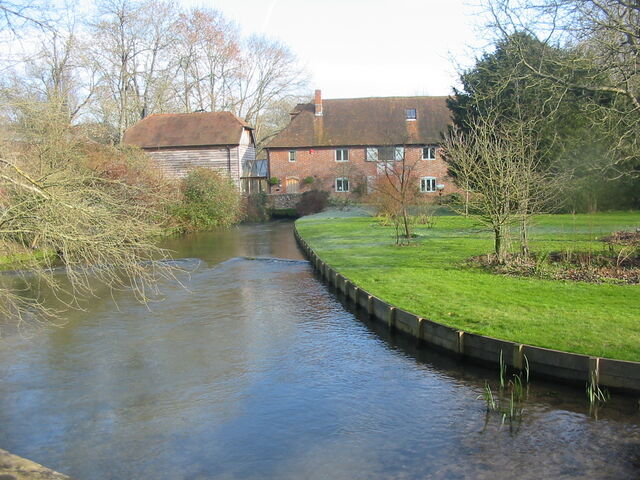 A classic mill leat on an English chalk stream

Some of this management creates valuable new habitat, for example heather moorland and wet meadows. But management can also damage the river habitat and destroy the key elements that trout need: gravels for spawning can be drowned by the presence of a weir or hatches; plants that shade the water to keep it cool and provide cover for trout can be removed in a desire to make fishing easier; old mills are not managed to keep the water moving and the channel free of silt; habitat is fragmented by weirs and hydropower.