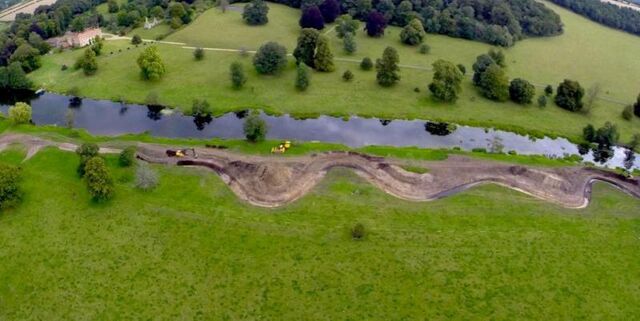 Bayfield is a country estate in North Norfolk between the villages of Letheringsett and Glandford, not far from Blakeney and Cley on the coast. The Hall is set in landscaped parkland through which flows the River Glaven, one of North Norfolk’s chalkstreams. The parkland was established in the C18th and includes a serpentine, ornamental lake created by damming the Glaven. In the late C19th and early C20th, under the ownership of Sir Alfred Repps Jodrell, a number of changes were made to the park including diverting the river around the lake in a brick-lined tunnel.

The reason for this was a protracted dispute between Jodrell and the owner of the watermill upstream who kept flushing mud out of his mill pond, silting the lake and on occasions killing trout in the river. These events are recorded in the estate’s works diary. The dam forming the lake is an impassable barrier to fish such as sea trout and eels migrating through the River Glaven. Jodrell’s bypass tunnel was a potential route for fish movement, but at 700 metres long and with variable flows depending on whether the water was being let into the lake, it presented a formidable obstacle. In addition, being brick-lined and completely enclosed, the culvert offered nothing in the way of natural river habitat.

The start of the 700m culvert at Bayfield

In 2008, the Wild Trout Trust (WTT) carried out a survey of habitat quality and obstacles to fish movement on the River Glaven as part of the Anglian Sea Trout Project which was largely funded by the Environment Agency. Along with a number of other sites, Bayfield was identified as a significant barrier to free fish movement and the concept of creating an open channel for the river through the park was born. The River Glaven Conservation Group (RGCG) was instrumental in championing the project locally and a small steering group was formed including the owner of Bayfield, Roger Combe, RGCG members and Tim Jacklin of WTT.

Over time, as the Anglian Sea Trout Project was progressed by WTT, other projects were completed on the River Glaven including river habitat restoration at Hunworth in 2010 and a fish pass and channel restoration at Glandford Mill in 2012. During this period, plans were developed for the new channel at Bayfield and the steering group was expanded to include Professor Richard Hey (fluvial geomorphology expert and scheme designer), Estelle Hook of Norfolk Coast Partnership and Mark Watson and subsequently Jonah Tosney of the newly-formed Norfolk Rivers Trust. The remaining funds under the Anglian Sea Trout Project were sufficient to cover the cost of the design of the scheme at Bayfield, but to deliver it more money was required. These became available through a successful bid to DEFRA’s Catchment Restoration Fund made by Norfolk Rivers Trust and Norfolk Coast Partnership: the Nine Chalk Rivers Project. This funding allowed the de-silting of Bayfield Lake to take place during 2012, via suction dredging onto nearby agricultural land.

Meanwhile, project manager Tim Jacklin of the WTT tackled the panoply of surveys and permissions required in order to progress the new channel. These included planning permission, flood defence consent and abstraction licences, involving surveys for bats in the tunnel, flood modelling, a heritage statement and a Water Framework Directive compliance statement. After several hiccoughs and modifications to the plans, all the necessary paperwork was in place by early 2014. After a competitive tender process, A & V Squires Plant Company Ltd was appointed as contractor and work began in August 2014.

The new river channel was designed by Prof. Richard Hey to be a naturalised channel within the parameters of the site; these included the width of the land available between the lake and the brick culvert, the gradient of the valley, and the flow régime of the river. The final design gave a meandering channel of just over 1.2 km, incorporating 32 gravel riffles comprising over 700 tonnes of mixed-size gravel imported from a local quarry near Holt. The dimensions of the river channel and floodplain are such that fine sediments are transmitted through the reach whilst the gravel is retained. A spillway was created to allow flood flows to spill into the brick culvert, rather than into the lake causing siltation. Two pre-cast sluice structures were installed to allow fine control over flows of water into the brick culvert (to maintain suitable conditions for the bats) and to manage water levels in the lake.

The channel course was set out on site by Richard Hey and Tim Jacklin, then excavated by A. & V. Squires Plant Co. Ltd. The topsoil was first stripped from the river course, then a first cut down to 650mm below floodplain level. Some of the spoil as used to achieve the right levels on the floodplain, with the surplus being transported off site and spread on agricultural land. The fine shaping of the pools and marginal benches was followed by the import and introduction of the gravel riffles. Careful levelling was required as there was only about a 1.5‑m fall over the whole length of the channel. 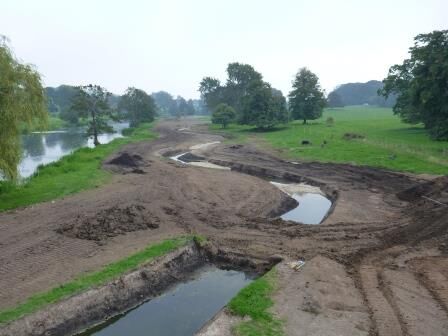 An archaeological watching brief (a planning permission condition) was carried out by Heather Wallis and discoveries included a Bronze Age ​“pot boiler” mound; these are collections of flint fragments which result from flints being heated in a fire then dropped into water, causing them to break and giving a distinctive crazed surface (pictured below). It is thought this was done to heat water before the advent of vessels which were fireproof. 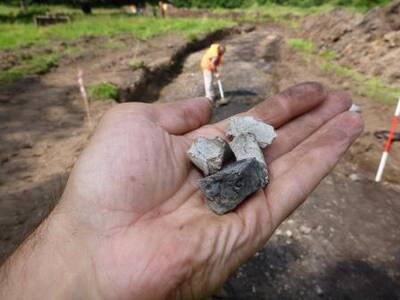 Finally, on 22 September 2014, the breakthrough from the old channel was made and water flowed down the new river channel for the first time. A few trout, bullheads and eels were rescued from the short open section of the de-watered old channel and released into the new river. 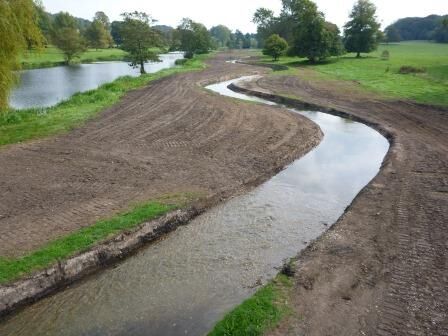 Water flowing down the new channel for the first time

The new river channel has created extensive new river habitat including over 30 gravel riffles suitable for fish spawning (trout, brook lamprey, bullhead, dace) and habitat for aquatic plants such as water crowfoot (Ranunculus sp.) and flow-loving invertebrates. The channel removes a barrier to migration for fish species including sea trout and eels, complementing previous improvements downstream at Glandford Mill and ongoing work to assess the tidal control structures at the coast. As the channel matures and vegetation establishes, it is hoped the site will be colonised by water voles (present on other sections of the Glaven) and otters (one was observed on the adjacent section of river during the project construction). 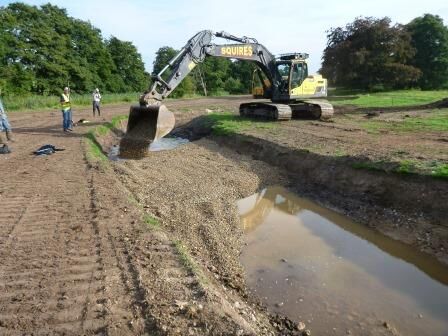 Gravel riffles being carefully placed and levelled within the new channel. 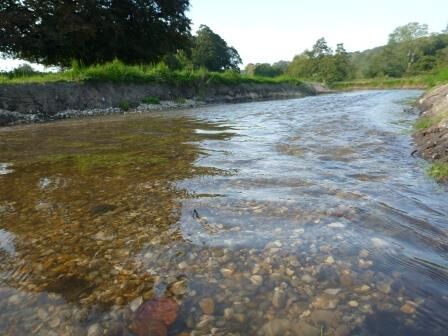 Over thirty new gravel riffles have been created, providing habitat for fish spawning and flow-loving invertebrates and plants
Share