With my ​‘Research’ & Conservation Officer cap on, I can straddle the often hefty divide between academia and NGO/​grass roots conservation groups and do a little bit to pull them together. Queen Mary University of London buy out some of my time and expertise from WTT to give their aquatic ecology MSc students practical training and experience in the field. As a part of a week-long fieldcourse based in the Lake District, I have forged a link between them and Wyre Rivers Trust but I’ll let some of the excellent members of this year’s cohort tell you about it, below. Thanks to Dr Christophe Eizaguirre and the rest of the students who worked efficiently on the day to provide the data, and of course, to Tom Myerscough from Wyre RT for sorting out the relevant permissions.

The Wyre is one of the key rivers of Lancashire, with its catchment covering much of the North of the county. It has historically been known as one of the best sea-trout fisheries in England. However, in the post-war 20th Century, like most rivers it suffered from intensified agriculture, urbanisation and new engineering methods, and these changes have cumulatively affected fish communities.

Brown trout, a fish which requires a diverse range of habitats to complete its lifecycle (loose gravel in which to lay its eggs, instream and overhanging vegetation to hide its fry, deeper pockets to hold larger adults) has been notably impacted. The Wild Trout Trust labels the brown trout as a sentinel species; its requirements mean that healthy trout populations are indicative of a healthy ecosystem (from the freshwater invertebrates to riverbank birds) so if it isn’t there, then something is likely to be wrong!

A river is only as good as its catchment, and starting small can make the task of river restoration less daunting. Hence, Woodplumpton Brook has been chosen as one of the Wyre River Trust’s target sites for improvement. Aerial photographs reveal how this stream has been straightened and channelised since the 1940s, processes which greatly reduce the diversity of habitats needed for fish to survive. No trout have been seen here for 20 years.

One issue, in particular, is that of artificial barriers to fish movement. On Woodplumpton Brook, a road-bridge culvert speeds up the water as it glides over a concrete slab. Under normal flow conditions, this creates a very shallow and uniform area of fast water for 15m which hinders the free movement of fish upstream, especially larger individuals. Structures like this impair other restoration efforts upstream, such as fencing off livestock, addition of woody debris and planting of willow, by preventing recolonisation by larger fish. Even seemingly small obstructions like this can have a large effect (e.g. Jeroen Tummers WTT blog).

A restoration intervention was put in place last year to reduce these connectivity issues. Baffles, large pieces of wood anchored to the concrete, were fitted in the culvert. They slow the flow by increasing sinuosity and creating slack water refuges, and increase the water depth, allowing fish to make their way from baffle to baffle and hence upstream.

Several cohorts of Freshwater and Marine Ecology Masters students from Queen Mary University of London have conducted sampling to assess the impact on the fish communities both before and after baffle installation. Our data will contribute to the long term monitoring of changes at this site as a result of this installation and other restoration techniques that have been put in place over recent years. We got to learn and practice new techniques and at the same time contribute useful data for Wyre Rivers Trust; a win-win situation! 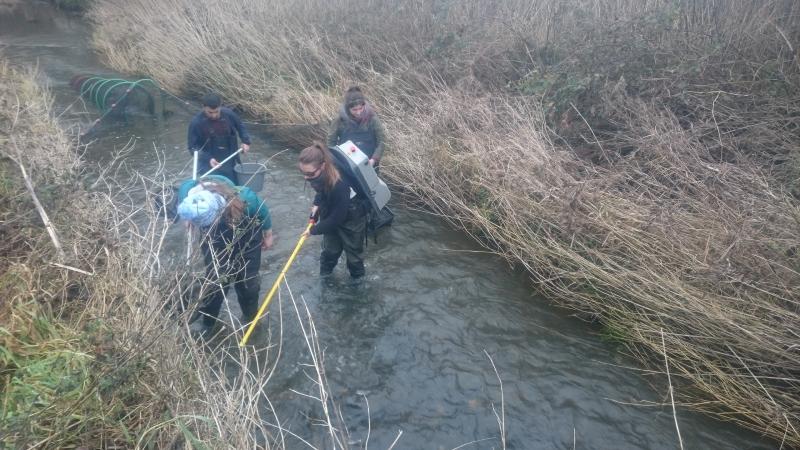 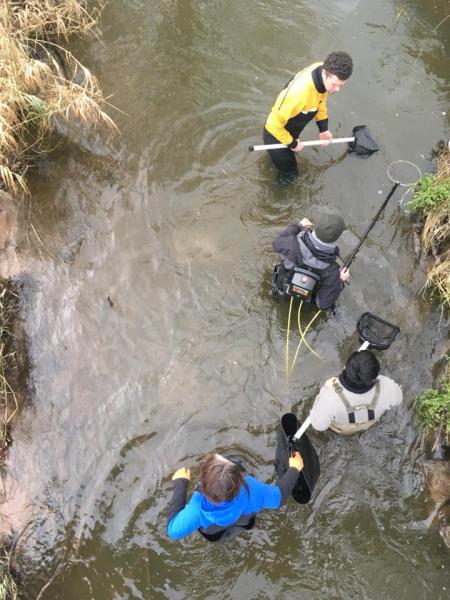 To determine whether the baffles are actually helping, electrofishing was carried out both upstream and downstream of the culvert. To gain a representative population estimate, 50m stretches containing similar habitat features were cordoned off using stop nets, and 3‑run depletion sampling was conducted in each section. Each fish was identified and its length carefully recorded. After each run, the caught fish were released outside of the survey area to prevent recounts of the same individuals. 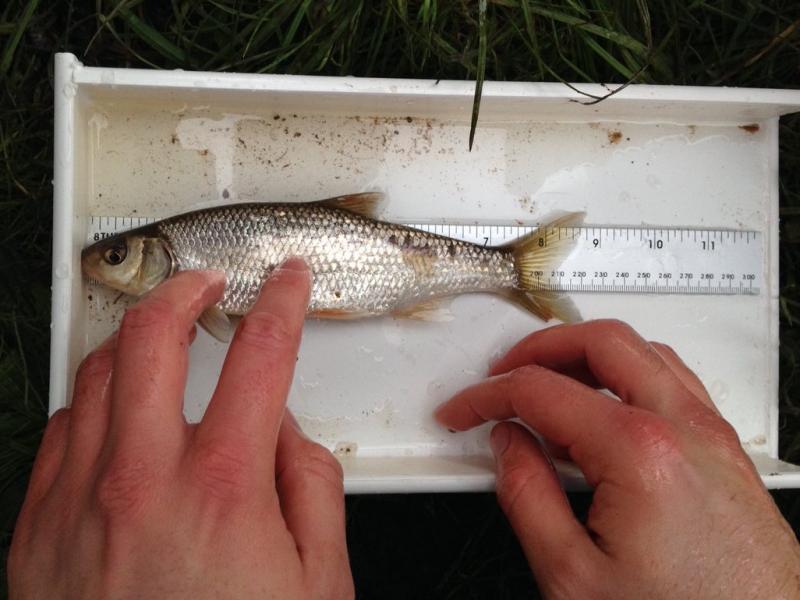 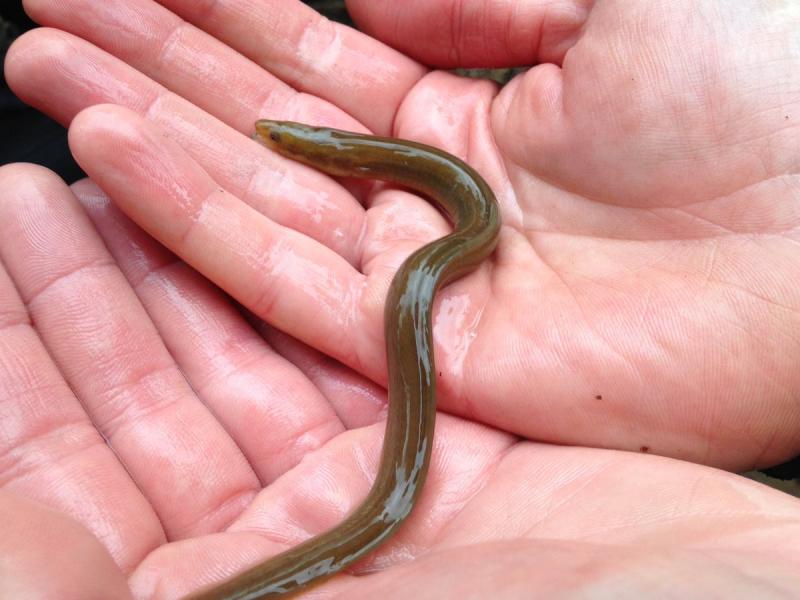 Last year, i.e. prior to the baffle installation, the group surveying the fish community in the Brook found that the communities downstream and upstream were significantly different (Fig. 1), and that the average fish size upstream was significantly smaller than downstream (Fig. 2). This implies that bigger fish were discriminated against, i.e. that they struggled to swim upstream through the culvert. 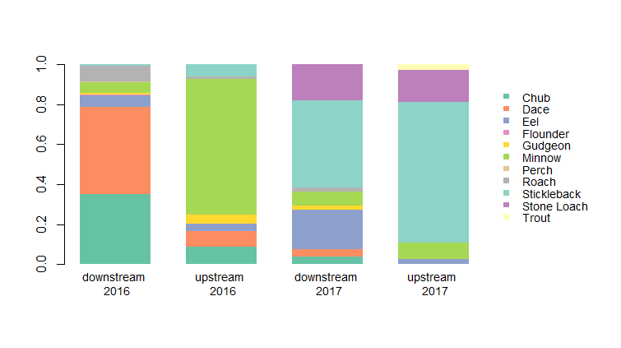 Fig 1: Stacked bar chart showing the proportions of each species to the fish community at sites either side of the baffles per year. The 2017 sites (after restoration) are much more like each other than the 2016 sites (before restoration), suggesting that the baffles are doing their job, improving fish passage through the culvert. 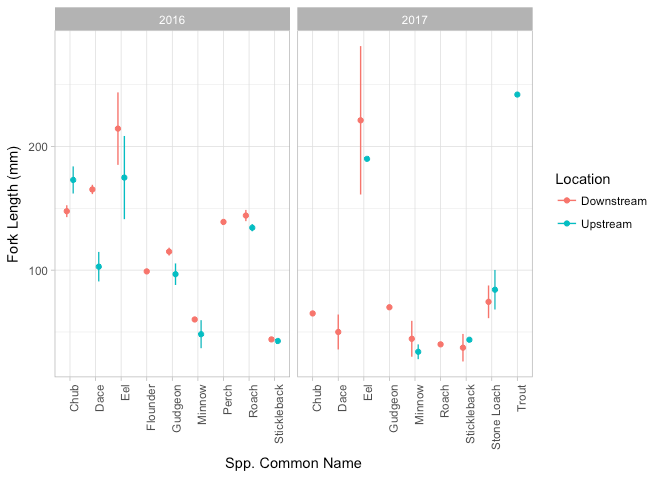 Additionally, the overall community was quite different from last year. One of the most exciting discoveries was that we recorded a brown trout – the first in Woodplumpton for twenty years, and perhaps a sign of the overall recovery of the Brook. However, chub and dace were found in abundance last year, whereas this year there were very few. Furthermore, this year stickleback and stone loach were most abundant, whereas last year they were not present or found in very low numbers. These differences, in conjunction with us collecting several recently dead chub specimens (including larger individuals in the upstream section), suggest that although the restoration works are improving connectivity and habitats within the Brook, pollution events undermining the work and altering the community structure. 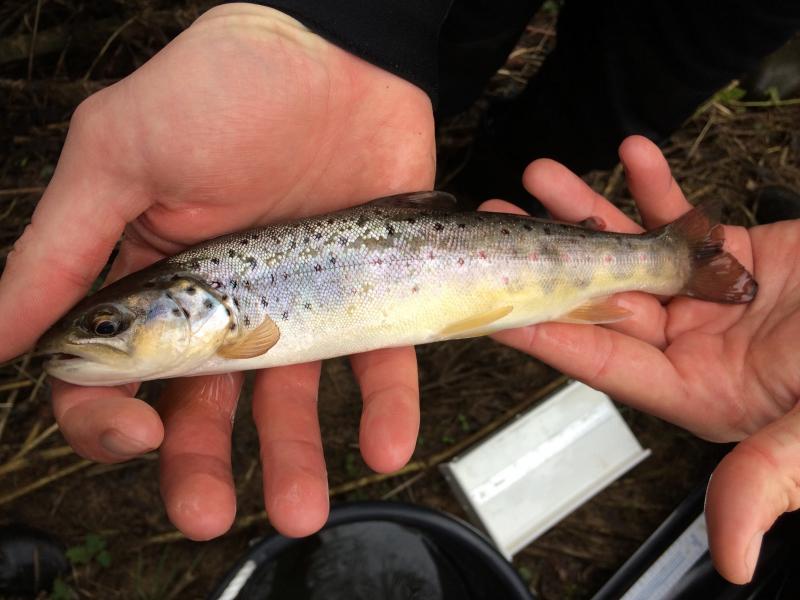 The first brown trout for 20 years!

Thus, despite apparent success of the baffles in mixing fish populations, it appears that overarching factors are impairing the true restoration impact and that Wyre Rivers Trust still have some work to do with local landowners. It should be noted that this is only the first year of data collection after installation of the baffles, and it will be interesting to see what future cohorts of our MSc will find in subsequent years.

If you have any questions re our report or the work of the Wyre RT on Woodplumpton Brook, please contact Dr Christophe Eizaguirre or Tom Myerscough, respectively.