An enthusiastic response from Yorkshire

You may have seen via the WTT news pages or via Twitter that we were awarded a grant from Yorkshire Water​’s Biodiversity Enhancement Fund which is part of their Blueprint for Yorkshire. 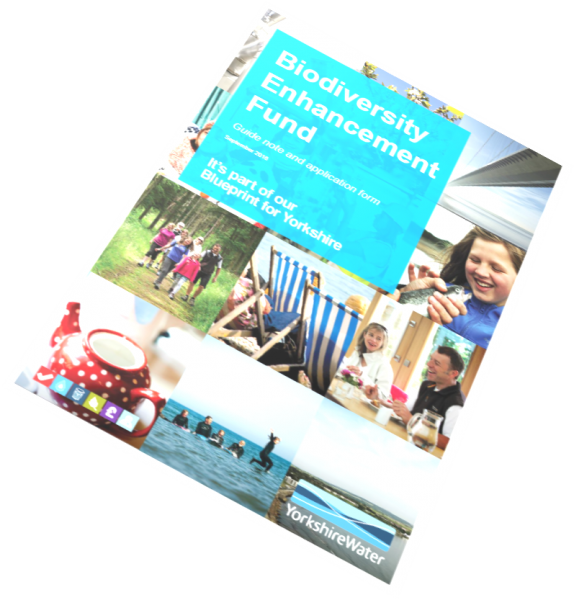 According to Yorkshire Water: The Wild Trout Trust secured funding to deliver projects across multiple locations within the Yorkshire Water operating area. Projects focused on work to restore, improve and maintain becks, rivers and wetlands. This work is in line with the government’s Catchment Based Approach plans for river management and is in in partnership with the EA, the Rivers and Wildlife Trusts, and local community groups. The proposal also focused on enhancing volunteer’s practical skills in order to enable them to apply learnt techniques on other nearby sites and create a network of environmental stewardship groups for the future.

This proposal was successful because the project benefits BAP species and habitats as well as focusing on mitigating the impact of YWS neighbouring assets. The emphasis of the project on upskilling local groups was also valued.

Obviously improving habitat is key to the aims of the WTT but our impact is all the greater because of engagement and collaboration with grass roots organisations, and these Yorkshire Water funded ​‘habitat demo days’ were my first opportunity to lead workshops on my local patch.

After discussions with Don Vine at Yorkshire Wildlife Trust, Pete Turner at Environment Agency (of course), Craig Best at the National Trust, and Nick Chuck of Bingley Angling Club, I settled on two small tributaries of the Aire (Howgill & Granby becks) within the grounds of East Riddlesden Hall, opposite Marley Sewage Treatment Works. As a part of the agreement with Yorkshire Water, some of the funding will be used to create a semi-permanent wetland (planned by Yorkshire Wildlife trust) which will contribute to natural flood management via water storage. As an example of some of the leveraged funding achieved, the Environment Agency have funded the livestock exclusion fencing along Granby Beck which ensured that all our instream habitat works were protected and the benefits realised more quickly.

My reasons for choosing this site were numerous, but spawning habitat is relatively rare on the mainstem Aire and hence looking after the numerous but all too commonly abused small tributaries, the capillaries of the river network, is very important if we want self-sustaining, resilient wild trout populations. There is the added advantage that it is relatively easy to demonstrate various restorative intervention techniques on small tribs that are scalable, and then let volunteers get stuck in both literally and practically. 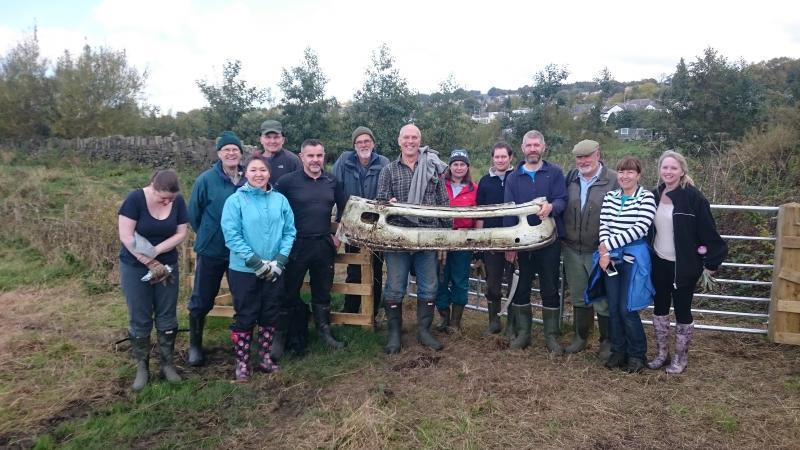 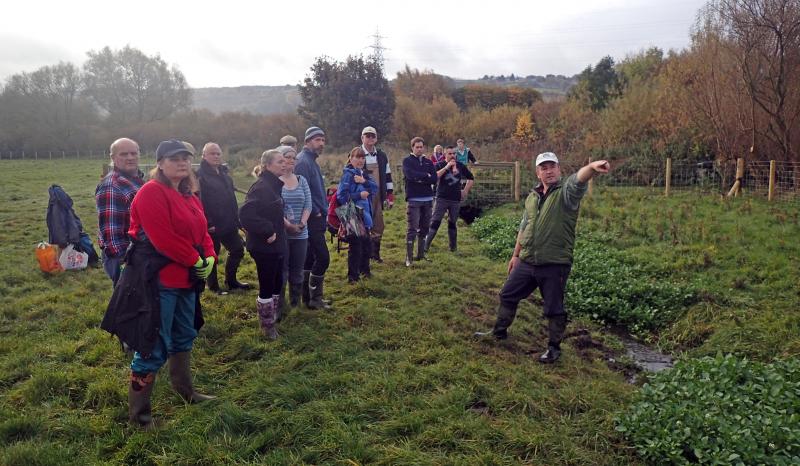 Sixteen people attended each of two consecutive Saturday workshops at East Riddlesden Hall. Participants came from a variety of sources but I was blown away by the fact that representatives from nine different angling clubs attended, including Appletreewick, Barden & Burnsall Angling Club, Skipton Angling Association, Bradford City Angling Association, and even as far afield as Knaresborough Anglers Club. There was also a volunteer team from ComputerShare but from the degree of energy and enthusiasm, you’d never have guessed that they were office/desk-bound for the majority of the week! They appeared genuinely proud of their achievements and new found skills. One of the most gratifying moments for me was overhearing two committee members from an angling club on another catchment, stood next to one of the pinch-point interventions, discussing exact locations where they could apply such a measure on one of their own waters. Bingo! 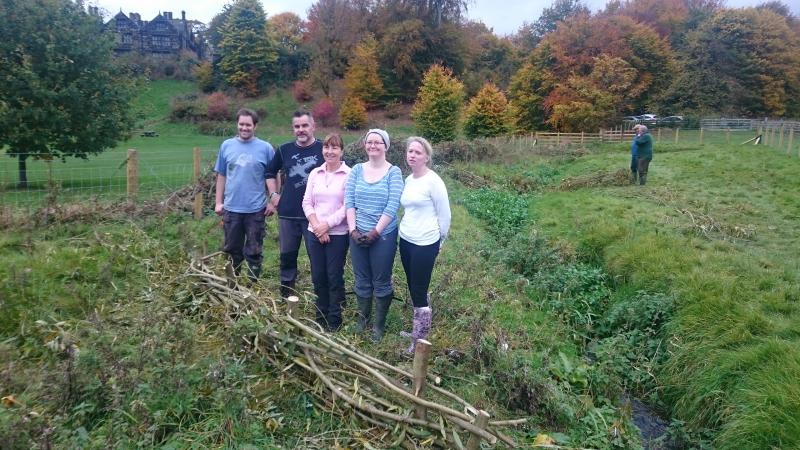 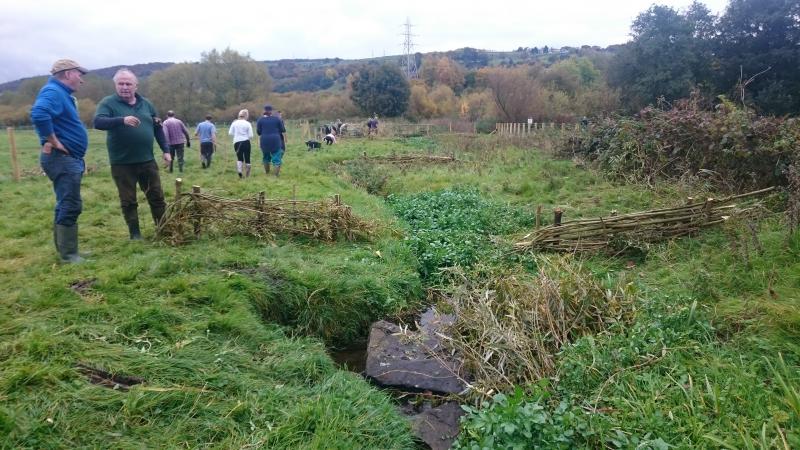 I created a social media summary via Storify, here. Some of the take home facts and figures from the two days at East Riddlesden, and a similar demo day run by colleague Gareth Pedley with Caitlin Pearson of Yorkshire Dales Rivers Trust on Skeeby Beck, are summarised in the infographic below. 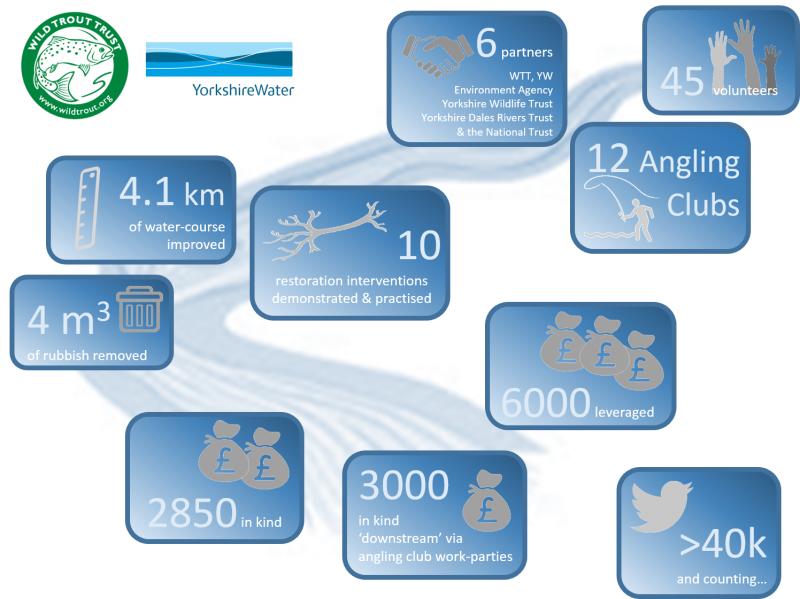 Please contact me if you have ideas for similar workshops or practical visits that could be considered for support under our partnership with Yorkshire Water.