Diving in on the Dever

It is incredibly difficult to drag our Conservation Officer for the South & West, Mike Blackmore, out of the river (where we know he prefers to be). Therefore, in order not to distract him from his valuable work before the end of the ​‘in-river’ season, we asked Kris Kent to update us on work to restore the River Dever. Kris has been fly fishing and trotting for brown trout and grayling for over 20 years in the UK, Europe and Scandinavia. He is PR Officer for the Grayling Society and helps WTT with our online communications and events. (WTT Director: he’s also a bloody good egg – thank you, Kris, for all your help).

I was between jobs so I emailed Shaun Leonard, Wild Trout Trust Director, to see if there was anything I could help out the Wild Trout Trust with. I was thinking of a little light administration, spreadsheets, reports or the like. Within a few minutes Shaun called me on the mobile. ​“Did I fancy helping out Mike Blackmore with a project he was working on?” I said ​“Why not.” Shaun suggested I call Mike to make the necessary arrangements. Mike seemed a little bewildered by the fact that I was going to be helping out but he suggested that I start the following Tuesday and filled me in on the logistics.

In Guildford on business and on my way back to home in Lambourn, I realised I would be passing close by the project site, so I popped by to make sure I knew where I would be going the following week. I pulled off the narrow lane that skirted the river by the pretty little church of Saint Michael and All Angels. Mike’s white VW Transporter was parked up by the stables so I knew I must have been in the right place. 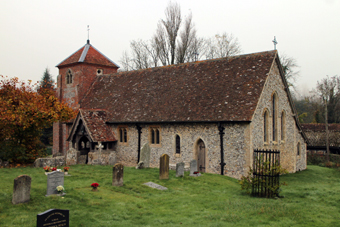 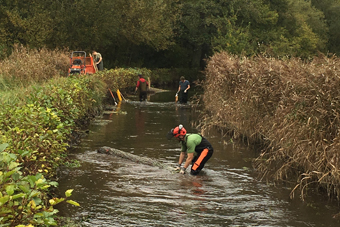 Saint Michael and All Angels, and the team working hard

I decided to take a quick stroll along the river and see if I could find Mike and the team and see what was going on. It didn’t take me long to find them. Mike and Jonny, the Keeper, were being ably supported by volunteers from Sparsholt College. They looked a little confused as I strode down the path in suit and brogues!

Mike walked me down the river explaining the background to the project, the problems being addressed and the plan for the project. The Environment Agency had identified this reach of the Dever as being an ideal opportunity to undertake a major habitat restoration project with the Wild Trout Trust as part of the Test and Itchen Restoration Strategy. Following engagement and planning with the riparian owners and the team that run and maintain the fishery (Fishing Breaks), a project was pulled together. The project was funded by the owners, the Environment Agency and a donation from a WTT partner, Springwise, through an initiative called 1% for the Planet by which environmentally-minded businesses can donate 1% of their turnover for work to improve our natural environment. Fishing Breaks also provided skilled labour in the form of River Keeper, Jonny Walker.

This section of the Dever was suffering from a number or problems. Impoundments meant that long sections lacked significant flow and had led to siltation of the spawning gravels, uniformity of habitat, and tall, vertical banks. It was overwide in many places and had been artificially straightened. The uniform habitat was limiting biodiversity and, whilst there was a reasonable head of wild trout and grayling, the lack of suitable spawning habitat was hindering recruitment and a lack of refuges meant that fish (particularly juveniles) were vulnerable to predation.

The project had two phases. Week one focused on opening up the canopy in strategic places to let more light in and aid weed and marginal plant growth. The wood generated would then be used to create flow deflecting woody habitat features. Woody mattresses and hinged bankside trees would create fish refuges and trap silt, providing additional marginal habitat. Together these would help narrow the channel, increase flow, scour gravels and create a more sinuous, meandering channel. 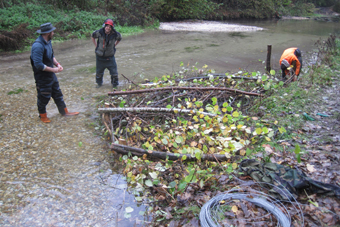 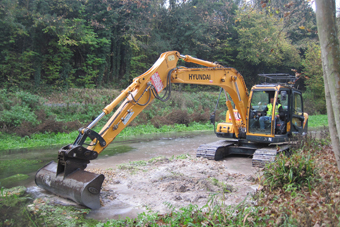 Creating a woody mattress, and the plant required for ​‘dig and dump’

In week two, the heavy plant would arrive. This would enable the team to do some ​‘dig and dump’. Pools would be dug out with the waste materials from that process used to create marginal berms that pinch the channel and accelerate flow. Then, new gravels would be introduced to make the new pools more hospitable for fish and provide spawning opportunities at the tail of each pool. Additional riffles would also be created to further diversify habitat. Sections of tall, steep bank would be re-profiled to improve floodplain connectivity, improve marginal habitat and provide easier access for anglers.

So I arrived at the beginning of week two and found the river already transformed. My job was to run around and help out with anything that needed doing, freeing up the professionals to focus on the important stuff. After the digger had introduced the gravels into the new pools, I would follow on and rake them over, blending them in and tidying them up.

I helped peg in some woody debris as juvenile refuge habitat and I stacked up the leftover wood and piled up the brash ready to burn. During week one, the team had created a new river bank along an over-widened section. During week two, I helped to back fill this area and translocate marginal plants to the new bank edge. 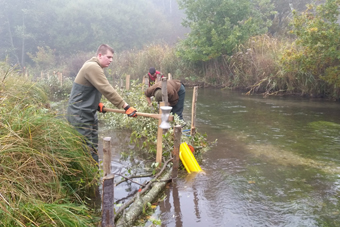 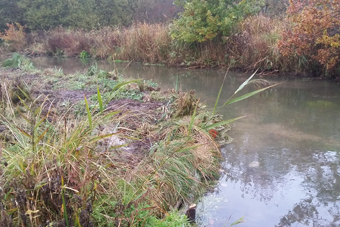 By the end of the week, I was exhausted, not being used to such manual work. But the sense of achievement was almost overwhelming. Seeing the transformation from degraded to vibrant habitat gave me a huge sense of satisfaction and pride. And the fish loved it too. Minutes after digging a new pool, the fish had already moved in and in one small pool we counted over twenty trout and grayling. I can’t wait to go back in six months or a year and see how the river has settled into its new setting. The other thing I enjoyed was the sense of camaraderie, working together on such an important restoration project. I highly recommend it. 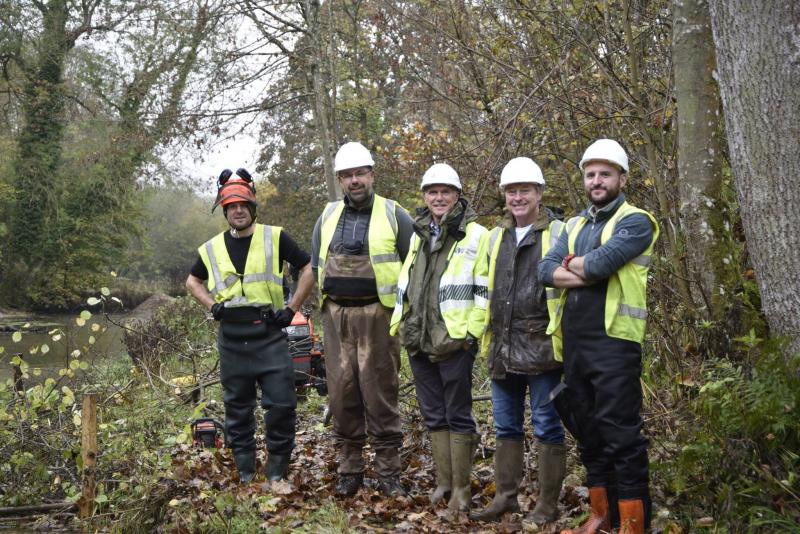 A few of the team!