AMBER is Adaptive Management of Barriers in European Rivers.

Rivers rank among some of the most threatened ecosystems in the world and are the focus of costly restoration programmes that cost billions to taxpayers. With only one third of its rivers having ​‘good ecological status’, Europe has probably more heavily modified rivers than anywhere else in the world. UK rivers are no exception.

Some barriers are needed to produce drinking water, to create irrigation, for energy production and for flood protection systems, as well as for river crossings, but there is an enormous amount of redundant infrastructure, and it is vital that the negative impacts these barriers create are removed or minimised. Weirs, small hydropower structures, big dams, culverts, and fords break the flow, fragment waterways, isolate habitats and weaken wildlife populations. Yet, the extent of river connectivity remains unknown for most rivers in the UK, even though inventories of physical barriers are required in River Basin Management Plans (RBMP).

What we did to help reconnect rivers

Under the motto ​“Let it Flow!”, the EU Horizon 2020 project Adaptive Management of Barriers in European Rivers (AMBER) led by Swansea University researchers took action to help re-connect hundreds of kilometres of rivers from barriers, improve fish migration, and develop tools to help manage European rivers in the future.

Mapping tools to create an inventory of barriers

Amber Barrier Atlas – The most comprehensive overview of available information on barriers in Europe, showing more than 600,000 mapped obstacles.

Citizens can join too! AMBER has developed the first citizen science app to record river barriers across Europe. In that way, citizens can become scientists helping reconnect European rivers, track barriers, and learn about their impacts! 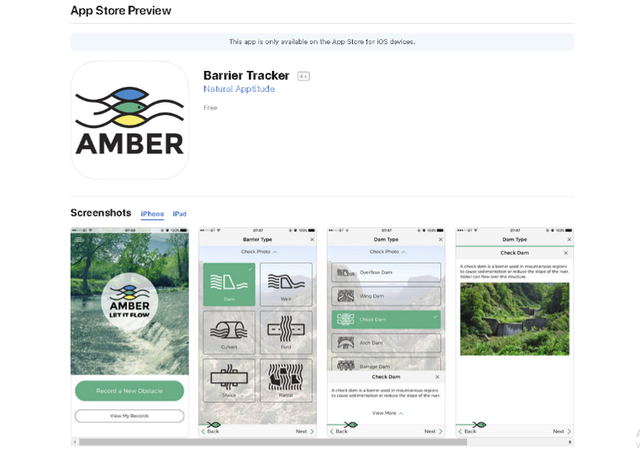 The Barrier Tracker app for recording barriers and filling data gaps developed as part of the AMBER citizen science programme in Europe.

What we found in Great Britain

Using these tools and with the help from citizen scientists from across the UK, we found that 99% of river basins in the UK are fragmented by artificial barriers like dams, weirs, and culverts.

There are very few free-flowing rivers in England, Scotland, and Wales, with an average of at least one artificial barrier every 1.5 kilometres. This means that there is less freedom for fish, insects, and aquatic plants to thrive. Urgent action is needed to reconnect rivers, to ensure their long-term health, and the health of the communities around them. 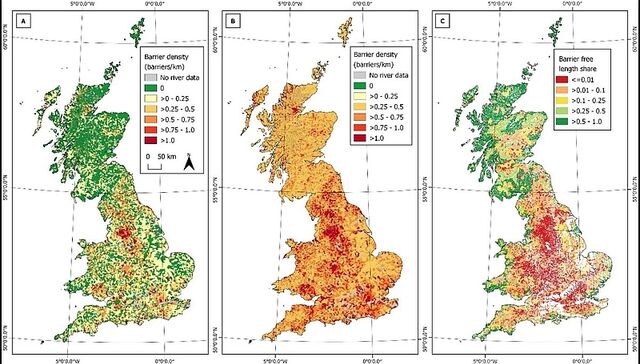 You too can be a citizen scientist, help reconnect European rivers, track barriers and learn about their impacts. You only need to download the Barrier Track app, walk along a river, take pictures of the barriers you find and upload to the app.

Swansea University researchers recently used Barrier Tracker to drill down and record all barriers within a single catchment: the River Afan, a small coastal catchment in South Wales. This comprehensive survey was a world first because previous surveys have only captured snapshots or have been limited to the main river stems. Our comprehensive survey of the Afan (up to the smallest headwater streams) revealed the true number of barriers (295) to be an order of magnitude higher than national databases indicated (41). River fragmentation has been hugely underestimated,.

Resource managers need to be able to quantify stream fragmentation, assess barrier impacts and benefits, and make better, informed decisions. We developed a set of tools based on existing and future barrier ​‘what if’ scenarios. All tools are described in this policy brief.

The eDNA Toolkit enables users to detect longitudinal discontinuities in river fauna and flora caused by barriers. This is specifically useful to understand and predict the consequences of human modifications of freshwater ecosystems and get a better grasp of how human-altered environments shape species interactions across taxa.

Environmental DNA (eDNA) is considered to be more sensitive, cost effective and faster than traditional survey methods, as sample collection for eDNA does not impact directly upon species or their habitats, requires no taxonomical knowledge, and is generally less time consuming. Combined with metagenomics, eDNA is rapidly becoming the tool of choice for the early detection of multiple taxa, including aquatic invasive species, as well as for the study of current and past community dynamics. eDNA represents a mixture of genetic material of different qualities (i.e. at various decay stages), including chromosomes, plasmids contained in cells, as well as extracellular DNA fragments, free in the environment or adsorbed onto particles. Environmental DNA from fish is detectable for between 7 – 25 days in freshwater but only 7 days for marine fish.

We have optimised and validated several eDNA-based meta-barcoding protocols for freshwater fish, invertebrates and macrophytes. The eDNA assays developed in AMBER allow users to infer presence/​absence data for several targeted species from small water samples. Community-wide and species-specific markers were developed for the detection of native and invasive aquatic species using Next Generation Sequencing (metabarcoding) and real time PCR (qPCR). 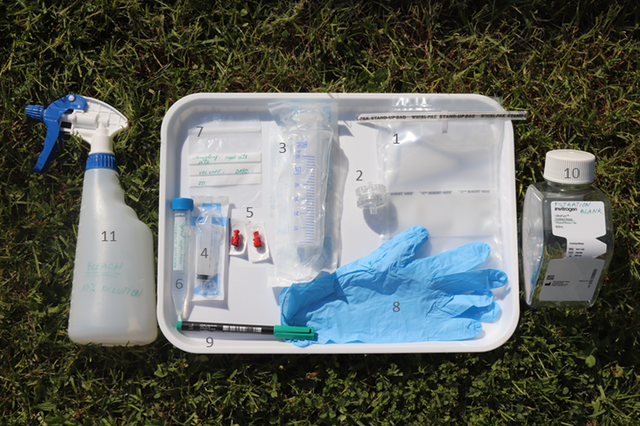 Sampling kit for eDNA. This kit contains the material needed to perform the proposed eDNA sampling in flowing water.

AMBER has accomplished a considerable amount in just 4 years:

AMBER has received funding from the European Union’s Horizon 2020 Research and Innovation Programme under Grant Agreement 689682.