In June 2013 WTT undertook an advisory visit for Glaisdale Angling Club on the River Esk, North Yorkshire. This was an 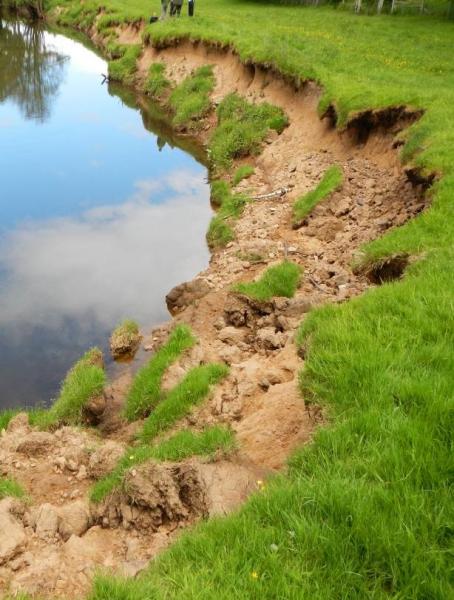 interesting visit, identifying many of the common issues associated with livestock grazing and sandy soils on upland rivers. One specific issue was significant erosion on the outside of a sharp bend. This is exactly the type of issue that would have once been dealt with by hard engineering, probably rip rap (rock armouring), for which there is already evidence of failed attempts, or possibly even gabions. The WTT prescription here, however, was to employ more sympathetic, natural bank protection measures that would actually enhance habitat in the area, rather than degrade it.

The use of brash revetment was an option here, but the spatey nature of the river meant that there was a potential for further erosion from high water before any protection measures could be completed or take effect. With this in mind, the recommendation was made to initially use a very light touch, low cost approach that simply involved fencing of a buffer strip along the bank to prevent the grazing (one of the main causal factors), coupled with planting of willow whips to consolidate the bank.

The work was undertaken by the Glaisdale Angling Club and North York Moors National Park Authority and, as can be seen from the before and after photos, simply fencing livestock away from the river bank has allowed large areas of grass to colonise the bare earth, the foliage and roots of which are already providing significant protection. The willow whips are also now becoming established and their roots will penetrate deeper into the ground, providing additional protection. 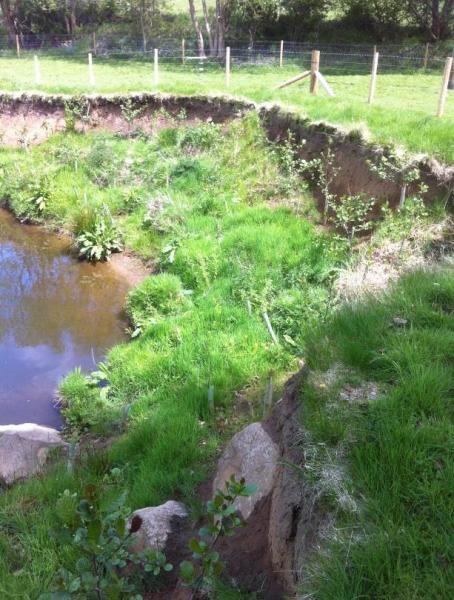 If the fence is maintained, and livestock excluded, it can be expected that over the upcoming seasons the more stable bank will also facilitate the colonisation of other herbaceous vegetation. This will further increase the diversity of root structure within the bank and provide even greater consolidation. The roughness they provide will also aid natural colonisation with local trees and plants by trapping seeds and other propagules.

While the bank is still not completely stabilised yet, and the technique is always initially susceptible to failure in very high flows, it is relatively low cost and provides a great demonstration of how simply removing livestock grazing pressure can reduce erosion and stabilise river banks. If major floods do not destabilise the banks they will continue to consolidate and stabilise to natural levels. If major floods do cause further erosion, there may be a case for undertaking a more formal brash revetment. 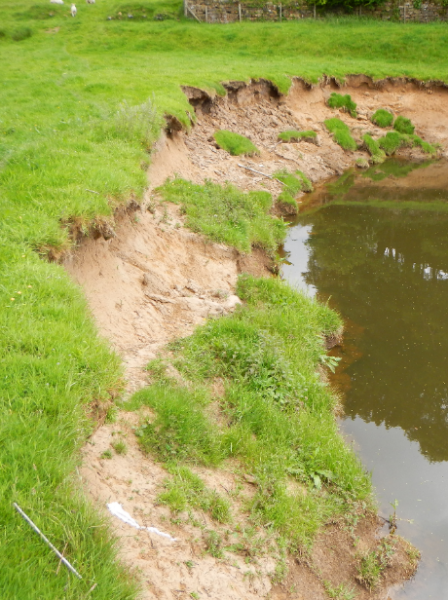