Beavers and Trout: The Science

Go to our Beaver Resource Hub for more information.

There is some research on the impacts of dams on upstream migration but very little regarding the equally critical downstream migration of sea trout smolts and juvenile trout.

While any ecological interaction between two species is inherently complex and influenced by locality and flow régime for example (in this particular case), we should remember that beaver and trout have co-evolved for millennia and coexist in many locations throughout Europe. However, the landscape throughout much of the UK where they might formerly have coexisted, prior to the extirpation of beaver, has changed considerably and is now subject to a suite of environmental pressures from humans that could influence the outcomes of any current interaction.

In summary, the science shows that beavers are not wholly bad or wholly good for rivers, for trout, for flood management and wildlife generally. A great deal depends on where the beavers live, particularly the nature of the habitat and what management is undertaken to mitigate any problems.

Professor Jonathan Grey of the WTT and Lancaster University has reviewed the scientific literature and numerous reports from other organisations. Both the summary and the full report are available to download as PDF documents. 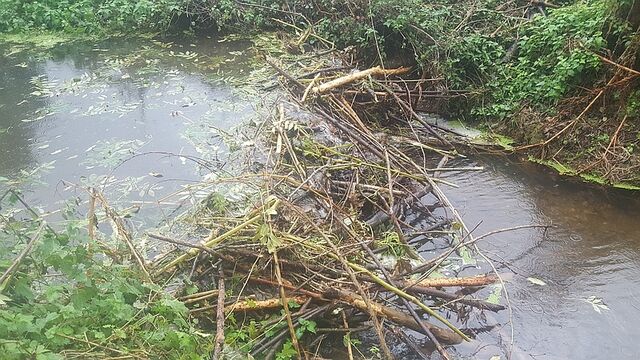 A beaver dam on a heavily modified side stream of the River Otter. Under the flow conditions in the photo, this dam would not be passable to most trout. Photo: Mike Blackmore

The Eurasian beaver (Castor fiber) co-evolved and still co-exists with fish throughout its geographical range. However, where it has been extirpated, the landscape, flora and fauna have all changed markedly since beavers last interacted freely in the environment. There are now many different pressures, mostly anthropogenic, and many river corridors simply do not contain suitable habitat for beaver anymore.

In areas such as Fenno-Scandia, France, and some Baltic states where beavers co-exist with high economic value species such as Atlantic salmon, there is surprisingly little published information relating to beaver – salmonid interactions. The majority of detailed scientific studies stem from the United States so they focus on a different beaver species, different fish species and different local environments but an understanding of the underlying mechanisms can still be useful within the European context.

Will beavers impact upon trout populations? The complexity of potential ecological interactions between beavers and trout (see table below), especially against a backdrop of such a mosaic of patchy habitat (heavily influenced by man) across the UK means there can be no definitive answer. Even the beaver ​‘trials’ work will be of limited scope for extrapolating countrywide. Read the full report for further details.

Table 1: Summary of potential effects of beaver dams on trout. NB No weighting is assigned

Professor Ian Cowx carried out this review in December 2020 on behalf of a number of fishery organisations. It includes a review of the River Otter Beaver Trial.

The report of the Scottish Beaver Salmonid Working Group is comprehensive and a very good source of information on beaver / fish ecology.