Life in between the gravel grains 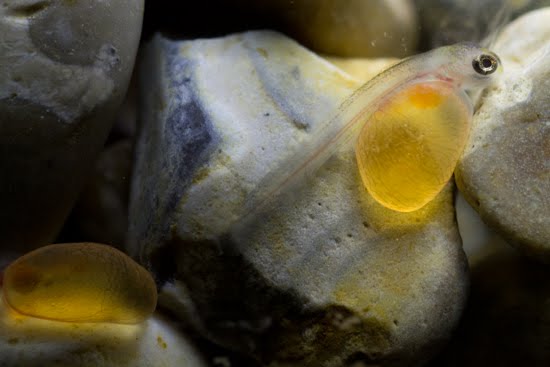 So, at this time of year, trout streams across the UK will play host to some genuine — and almost entirely hidden — miracles. Much of this will be played out in the microcosmos found in the tiny breathing spaces between irregularly-shaped gravel chips. It doesn’t matter whether the trout stream is in the middle of a busy city or in pristine countryside — new life is currently finding a way. In fact, I can think of a bus stop only a few hundred meters from where I currently sit that the queues of passengers will be standing almost within touching distance of a new generation of tiny trout. Each occupying parallel but completely separate universes.

Our (largely) warm and wet winter of 2012 will mean that lots of streams would have seen spawning efforts starting perhaps in November. The males chasing rivals away from prime spawning sites and the females fluttering their bodies sideways to thrash and scrape small depressions in the gravel bed.

The eggs shed and fertilised by the most persistent (or sneaky!) males in these depressions have then been buried by further thrashing. The resultant mounds of gravel covering the scooped out nests containing the fertilised eggs are called ​“redds” and come with a remarkable ventilation system. The raised ​“bump” profile (that can initially be seen as a much brighter patch — until the regrowth of algae camouflages it again) forces water to flow between the gravel particles. This keeps the eggs supplied with vital oxygen. However, especially at the early stages of egg development, the redds are very sensitive to disturbance. Anglers wading on top of or through such redds can easily kill the majority of eggs inside. Also, if the gravels become smothered with fine sediment at any point when either the eggs or the baby fish (alevins) are sheltering inside — they will suffocate and die.

As the baby trout develop within the spherical egg membranes, the eyes, spinal columns and yolk sacs of individual fish become visible. The longer this development goes on, the more mobile the little trout become inside their protective shells.

An arduous hatching procedure ensues in which the tiny trout (just over a centimeter long) wriggle, gasp and thrash their way out of a split in the egg membrane. These newly-emerged baby trout (complete with large yolk sac for nutrition) are programmed to STAY WITHIN THE GRAVEL until the large yolk sac is entirely absorbed (which will take them through to spring).

Emerging from the gravel in spring is a huge step into the big wide world — and with no yolk sac to rely on — independent feeding must take place to avoid starvation. For now though let us consider that from November through to somewhere roughly around April the gravelly beds (especially at the tails of pools) of our trout streams will hold the future generation of trout that can live up to the wildest of fly fishing dreams.

Even for a totally selfish angler, stomping on these areas of refuge is a bad idea for the prospects of future encounters. The fact that, even after the eggs have hatched, the tiny trout are hiding in the cramped spaces between gravel chips make them extremely vulnerable to being trodden on. Probably more insidious though is the threat of suffocation caused by siltation. This could be the result of channel modification/​presence of weirs that promotes silt accumulation, rampant bank erosion due to one of two main causes (invasive plant species that die back in winter or unrestricted heavy grazing and trampling by livestock), badly implemented drainage of roads, construction sites, buildings, forestry plantations or agricultural fields — the list goes on.

The video is a short insight into what goes on in the gravel (and why people should think twice about disturbing or smothering it).

Troutearlylifeblog from Paul Gaskell on Vimeo.