Here’s one I made earlier….The Hoffer Brook

As a new starter my colleagues have been interested to know what projects I’ve already delivered whilst working as a local authority ecologist. I’m able to explain all the usual techniques of channel narrowing and bed raising but one novel approach keeps getting more questions. So the clearest way to explain it is to write it down, and include some pictures. The one below hows the restored brook. 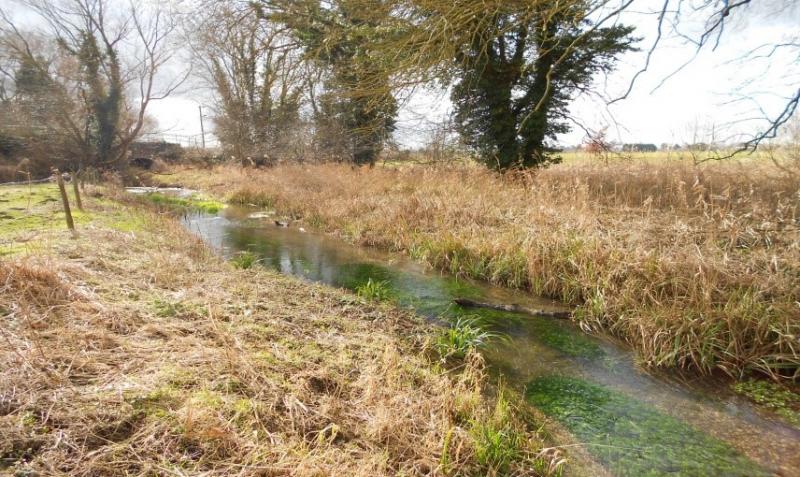 The restored (or re-built?) brook. The new bed is suspended over soft silt through the use of grass mesh.

The Hoffer Brook is a small degraded chalk stream in Cambridgeshire that runs for approximately 8km. It suffers from very low flows in its upper reaches but lower down it has a permanent flow. I have known the brook all my life as it forms the parish boundary to the village where I grew up, and I can be certain that there were no trout in it from the late 1980s through to recent years. The reason for the lack of trout was a combination of factors but the main bottleneck seems to have been the almost entire lack of spawning substrate and subsequent fry and parr habitat — these are the shallow streamy bits which are in stark contrast to the deep slow moving features that the brook exhibits. Water quality of the brook was considered to be high.

The Beds, Cambs and Northants Wildlife Trust, and specifically their Water for Wildlife Officer Ruth Hawksley, have been crucial partners in the delivery of this project. The Wildlife Trust was able to secure funding and oversee the contractual arrangements, while I worked-up the detailed spec and made sure that the final delivery was correct on the ground.

Having played and swum in the brook on many occasions it had always been known that some sections were pretty treacherous and appeared to have no natural bottom or hard bed. This was investigated by a topographical survey and sure enough there were areas that were significantly over-deep. But was this really the work of past over-dredging?

“Not entirely” is the conclusion that I have since come to. Whilst historic dredging may have over-deepened much of the brook, the local topography appeared to be showing a pattern to the deeper sections. What I believed we had encountered was the edge of the chalk escarpment running down to the lower ground. If the land had sunk and sea levels risen what I think we’d found were some areas of ancient silted shallow valleys. There was also another explanation to throw in, that of pingo ponds. This part of Cambridgeshire has a number of post-glacial groundwater-fed ponds still in existence. These ponds formed where an up-welling of ground water froze to form ice lenses which then over thousands of years of freeze and thaw, resulted in round ponds scattered across the landscape. The brook appears to have linked some of these ancient ponds. 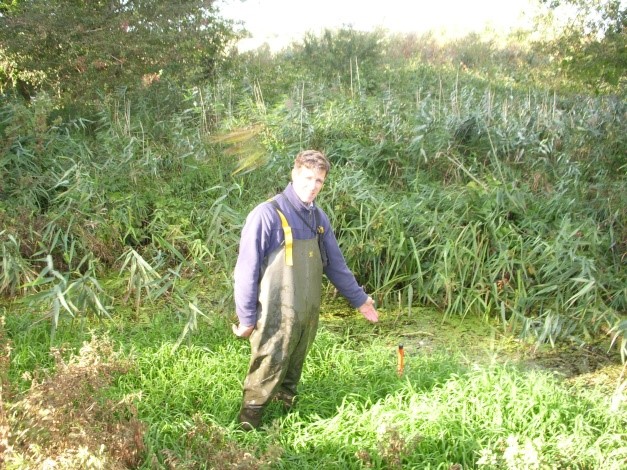 A ​“bottomless” part of the brook, note the top of the ranging pole. This part is now ~0.5m deep.

So in terms of restoration, what were we really restoring? The truthful answer is that no-one exactly knows how the brook was more the fifty years ago. Old enclosure maps showed that some of the meanders were being straightened way back. But the hardest, and probably most damaging works came in the mid-1970s when the brook was dug deep and some residents recall it being a mess that simply never recovered to its former state. Older residents of Foxton say how the brook was more open, had a shallow gravelly bed in many places, had a swift flow, and a range of fish species could be seen including brown trout (and to my knowledge they were not stocked). So the usual techniques of channel narrowing, brushwood ledge creation and bed raising all seemed appropriate but how much gravel would be needed? A huge amount. An amount that would have been prohibitively expensive. A new approach was therefore needed.

I’d been thinking this one through for years. I’d toyed with the idea of lining the bed so that the silt could actually become an aid to the project. But how, and with what materials?

One idea had been to use wooden trellises cut down to shape to form a support lattice over the silt. It is known that once wood is in anaerobic silt it hardly degrades but how would we have kept the trellis from tipping as material was placed on it, and what if gaps had formed between the trellis? That could be very dangerous and we could have lost the gravel.

Through brainstorming, Ruth and I (plus my Dad I’ll admit) came up with the approach of using vehicle tracking mesh (Grassform’s grass mesh, light duty) the type that is stretched out over soft ground. The advantage of using the mesh was that it could be cut to the correct width and then be stretched out for a full 30m length (the rolls of mesh came in 2m x 30m lengths). 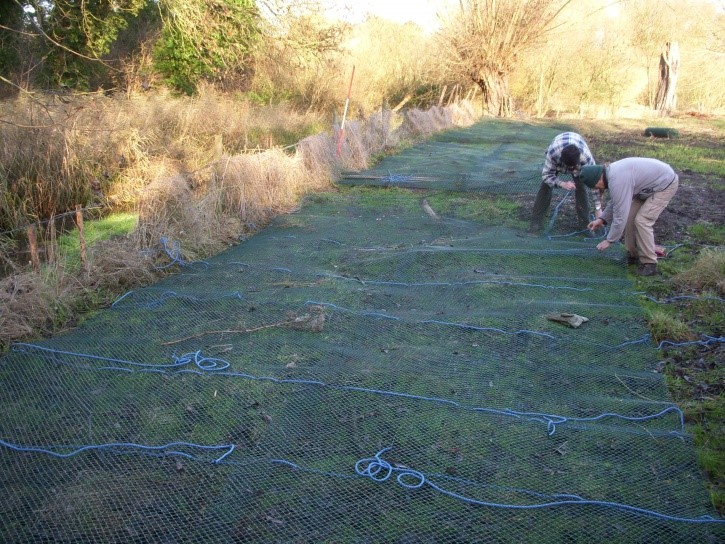 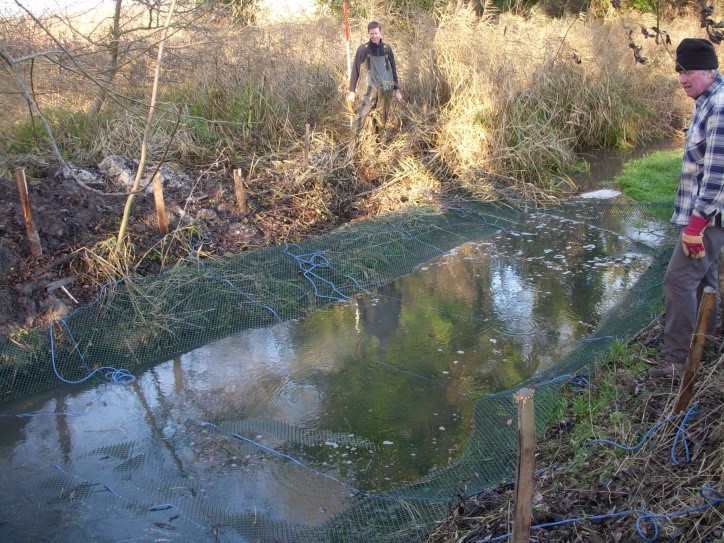 Threading the rope through the mesh to support it. Sinking the mesh, supported by rope from posts. 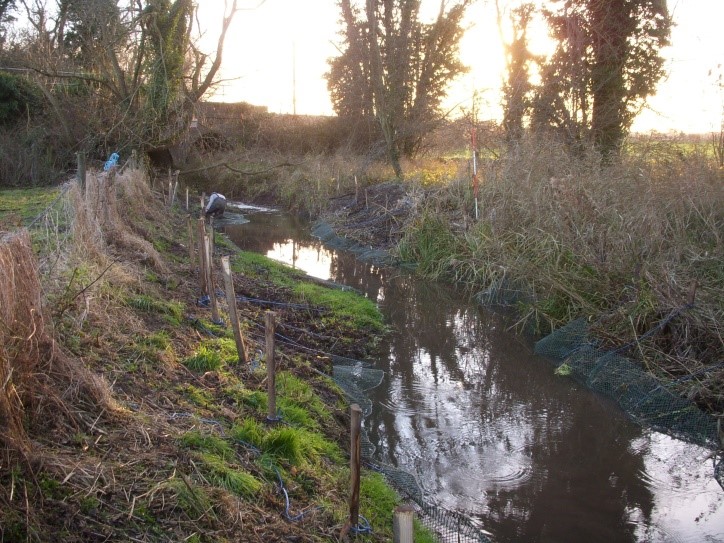 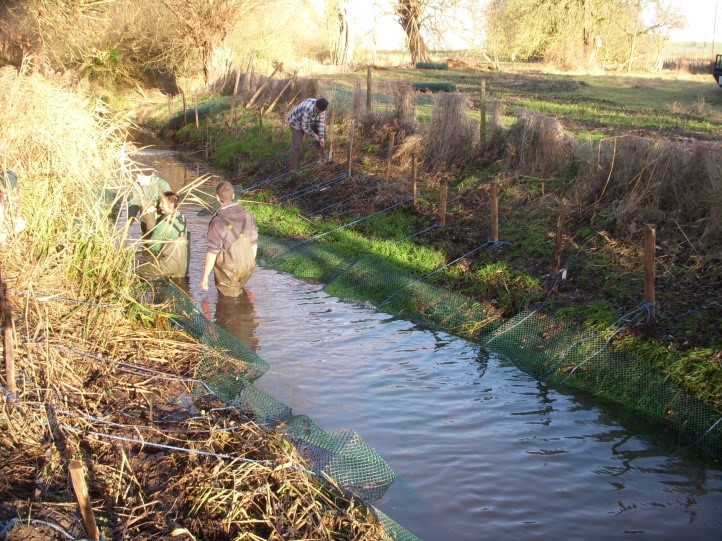 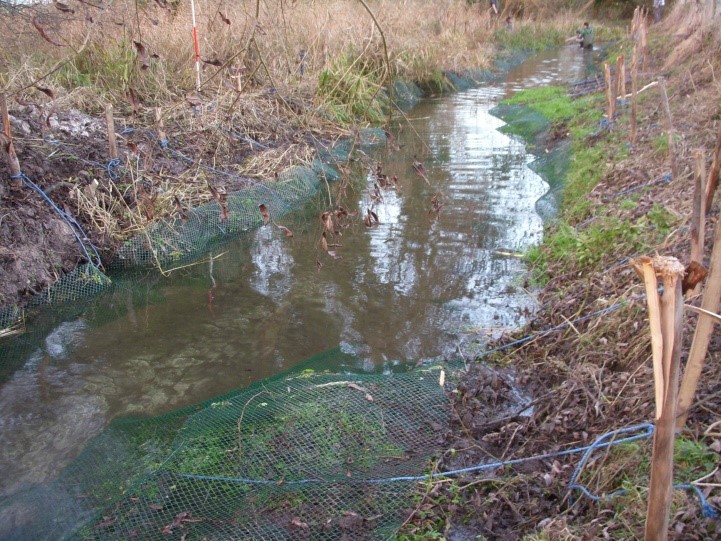 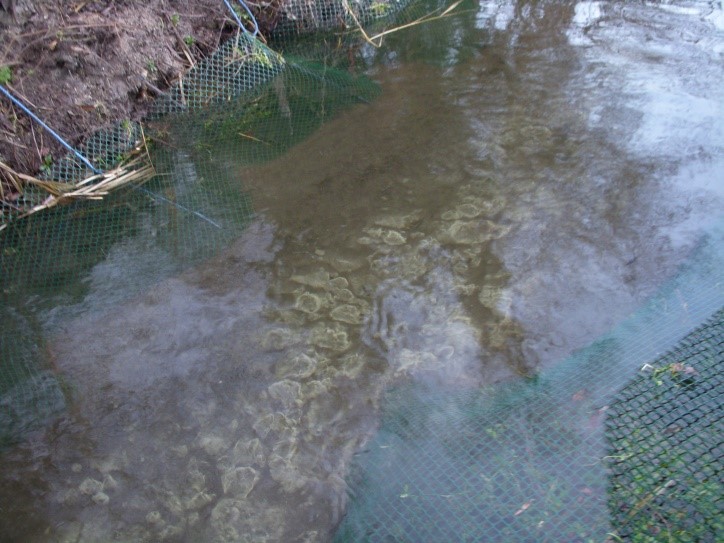 Note the springs arising from the bed. If a woven mesh was used the natural upwelling could have been interfered with.

Further benefits of the grass mesh were that is could be fixed together using numerous cable ties to make a strong and fail safe join. Then the matting could have 8mm polypropylene rope threaded through the mesh. These lengths of rope were then tied to 100mm chestnut posts that had been driven into the bank at 1m intervals. This effectively allowed the mesh and rope combination to be supported on top of the silt providing a strong but slightly adaptable support onto which we could then re-create a chalk stream. See photos above.

This idea came from those times where you are hitting away at posts only for them to suddenly push through a hard layer to move rapidly into a softer layer. I can envisage times where during the land forming processes of the last ice age there must have been episodes of meltwater which would have moved huge quantities of coarse material and distributed them randomly across the floodplain. In subsequent millennia our rivers have been acting to sort and move this material. I was simply trying to re-create one of the gravel lenses that rests on the softer valley mires.

On to this supporting layer we were able to undertake the usual approach of re-building a small chalk stream. Obviously, we had to take more care when placing the material initially; we couldn’t simply start at one end, we had to layer it all so that the whole mesh was tensioned equally. This was particularly important where we had tried to cut the mesh to accommodate a meander. I will admit that even today the mesh at one point still flexes up.

We did all of this based on sound judgement and a little bit of managed risk taking. We only did the first 45m using this method and were then able to use a more conventional approach, Ideally, I’d have liked to have got more depth of gravel down (we did get ~0.5m in places) but we were restricted by the proximity of a railway line and its overhead wires; consequently we didn’t get the upper reaches as elevated as we ideally would have. And we never knew how much weight the chestnut posts would support before being pulled out of the soft ground (we were confident of the load-bearing capacity of the rope and mesh). 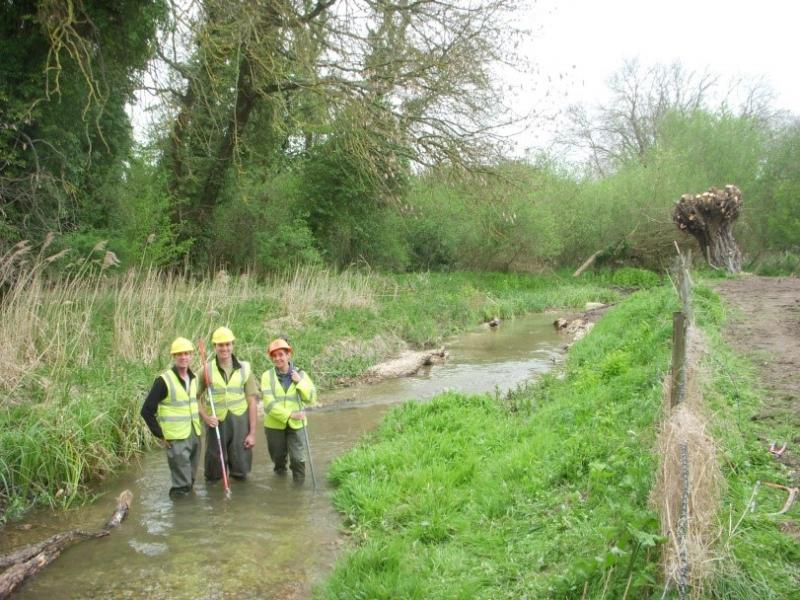 Work completed. Note that this photo location is the same point as where the 2m ranging pole had previously been pushed entirely into the soft bed.

But most importantly we have been able to restore/re-create a chalk stream habitat where once a spring-fed ditch had run for at least a generation. We’ve now got brown trout, minnow and brook lamprey spawning and attractive beds of water crowfoot and starwort.

To date the work has held up absolutely fine. It has experienced some of the wettest weather in recent times where the open mesh would have had no problem in allowing natural springs to rise from the bed again (which can be a problem where tightly woven membranes are used as liners), the chestnut stakes are still in place (even though some were hit by my old drainage team during their flail cutting operations which took out a couple of pieces of rope). And the new brook looks perfect. 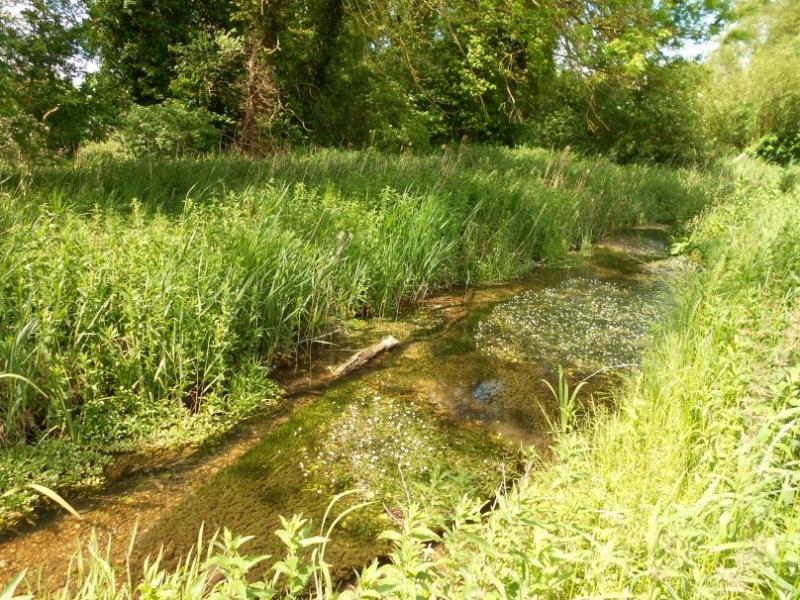 Photo taken about 14 months after completion.
The water crowfoot was planted as there was none upstream to colonise this area.

1. The use of Grassform’s grass mesh to support aggregate over deep silt can work on small watercourses.

2. It is not necessary to desilt a channel before undertaking such work (I had instructed a partial desilt simply to remove the dense Phragmites reed growth but the presence of deep silt can be looked upon as an indicator of where the new bed should perhaps be).

3. Use rope of 8mm thickness or upwards (due to a shortage of materials we did use some finer rope and it did look stretched but has not broken).

4. The placement of the supporting posts should be a close as can be afforded (this is important as if one support fails there will be others to take the load).

5. Instead of leaving the chestnut posts slightly proud (where one would have thought a drainage operative would have noticed them!), it would be better to cut them off flush at ground level and then to cover them over with 100mm of soil. That way the posts would have been entirely protected from mechanical destruction, the risk of interference by people and/​or degradation by environmental factors.

6. This approach is not suitable where future watercourse maintenance may necessitate the use of an excavator (this work could be destroyed very easily by one dig and pull of a bucket).

7. I have no first-hand experience to say if this approach could withstand high velocity flood flows but then you don’t usually get high velocity scouring flows where very deep silt has accumulated for decades. But my gut feeling is probably ​“yes” as the gravel is effectively protecting the mesh beneath it and as long as the gravel is not lifted then the structure beneath should be fine.

8. For a greater degree of confidence in the durability of this type of approach some form of metal support post could be used such as a universal beam. A universal beam could be drilled through to create an anchor point for polypropylene rope or even steel cable (we’d decided against scaffold poles as they were too narrow in diameter and were likely to be pulled over when ground conditions became soft).