After the winter spates and ​‘unprecedented’ flows rearranged much of the substrate of my local river, the Aire in N Yorkshire, there has been virtually no rain since. Consequently, it is already at late summer level, and the lack of energy has allowed thick scums of bacteria and other microbes to develop on the bed. The lethargy of some of the trout seems to reflect that of the river. And the forecast is for a hot summer, allegedly.

This leads me to my monthly scan of the literature for research involving brown trout, which has thrown up two recent papers assessing impacts of climate change via modelling. The first was a study of trout populations from two streams on the Iberian Peninsula, where trout are at the edge of their natural distribution. Ben Tyser reported for WTT on earlier work in this region – see the WTT Library (Articles by topic) page on Climate Change: Iberian trout threatened by climate change.

The purpose of the new study was to determine the realised thermal niche, the actual environmental temperature window at which the population was comfortable if you like, and then predict how climate change may affect their range distribution in those streams. The authors comprehensively assessed current trout abundance via electrofishing at 37 sites, and developed a robust relationship between air temperature and water temperature along the altitudinal gradient of the streams to relate to the trout distribution. Being able to convert from air to water temperature allows the authors to use the air temperature predictions available from the Intergovernmental Panel on Climate Change (IPCC) reports to predict the water temperatures that trout may experience in the future.

It appeared from the extensive dataset that water above 18 °C was not favoured by trout and this temperature limit is actually lower than the accepted physiological thermal range, ie trout should be able to function and grow ​‘normally’ up to 20 – 23 °C. Hence, while physiology may dictate the limits of ﬁsh tolerance, these limits can be more constrained by additional restrictions, such as competition or hydromorphology, and hence the realised (actual) thermal niche was smaller than the fundamental (theoretical) niche.

Using the most unfavourable climate change scenario predicted by the IPCC, the trout habitat loss based purely upon water temperature change increased to 38% and 11% for the two streams in an upstream direction at the end of the century, 2100. Important then, as WTT so often advises, to maintain and protect riparian vegetation, especially trees to provide shade and keep the water cool alongside many other benefits.

The second paper uses a combined ecological and evolutionary approach to determine whether trout can adapt in time to keep up with climate change. The authors argue that to implement effective management and conservation measures, it is crucial to quantify the maximum rate of change that cold water, freshwater fish populations can withstand. They developed a model that incorporated aspects of river dynamics, the bioenergetics of trout, and adaptive habitat selection, and built in a novel component that allowed for genetic and life-history adaptations. Two key traits, trout size at emergence and the maturity size threshold, the authors proposed would be highly influential. 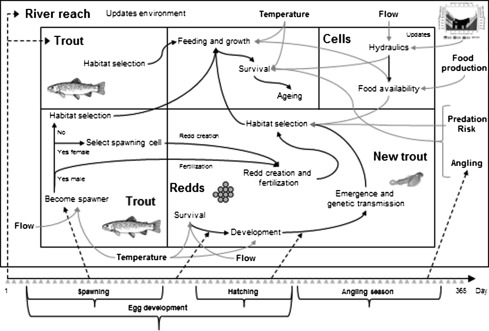 A modeller’s view of the trout life-cycle

To illustrate potential applications of the model, the authors analysed trout population shifts and evolutionary dynamics under scenarios of climate change-induced warming (ie similar to the first study reported above), and warming plus flow reduction resulting from climate and land use change. They compared the outcomes of their model to a baseline of no environmental change.

The model predicted severe declines in trout density and biomass under climate warming. The rates of decline were substantially greater under the combined warming and flow reduction scenario. Not good news; there was a distinct probability of population extinction over contemporary time frames. Therefore, the adaptive capability of trout (as modelled) could not prevent extinction under high rates of environmental change. We must hope that under real world scenarios, a few of our remarkable trout will have the variation in their genetic tool-box to cope when it comes to the crunch!

If you are interested in reading more (and in layman’s terms) on how trout adapt to warmer waters, it is worth returning to your latest edition of Salmo (May 2016) for the excellent article by Dr Eoin O’Gorman – Icelandic trout: adapting to life in warm water. As he pointed out, trout do show remarkable tolerance to warmer waters, but it is the lethal limit for development of trout embryos that may be critical and if fish cannot migrate to cooler waters to spawn then the population will suffer. Connectivity is key! Let’s hope the new research project he is involved with, Ring of Fire, sheds further light: follow @Arctic_Biology on Twitter for updates of that work.