This article by Andrew Griffiths is about the long-awaited Welsh regulations for farming and water. An interesting read!

Some context to explain why this is an important topic for those of us interested in rivers and trout:

Sea trout populations are in poor shape in Wales, (see news item ​‘sea trout stocks in Wales at their worst ever levels’) and the number of agricultural pollution incidents in rivers in Wales, particularly those related to slurry pollution, is acknowledged to be unacceptable (a letter from the Chair of NRW to the Minister in 2017 detailed the ​‘unacceptable number of slurry pollution incidents that have been experienced across Wales’).

England, Scotland and Wales have different regulatory frameworks that aim to reduce the pollution of our rivers by agriculture. In England, the Farming Rules for Water were introduced in April 2018 and regulations for Wales were expected to be implemented in January this year, but withdrawn.
Just before Easter, the Water Resources (Control of Agricultural Pollution) (Wales) Regulations 2020 were published and seem to have pleased neither the farming organisations nor the conservationists. See Andrew Griffith’s article here. 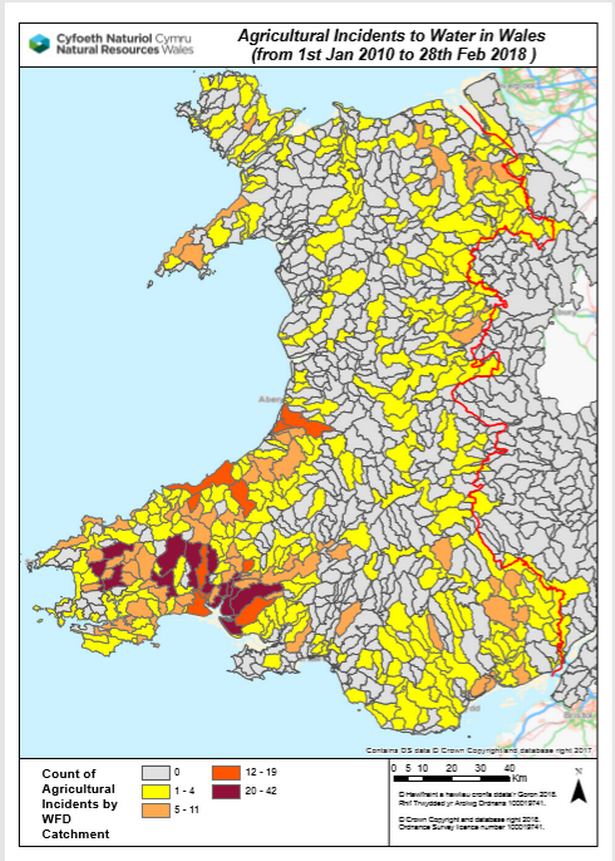 Note how the worst polluted areas overlap with two of Wales' most iconic sea trout rivers, the Teifi and Towy.
Share