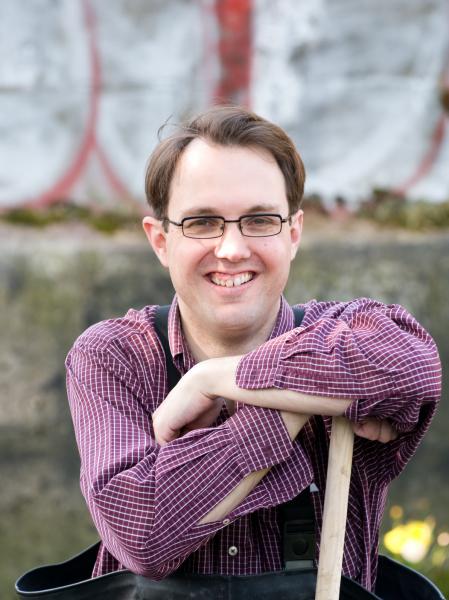 The Wild Trout Trust is delighted to announce that the high profile conservationist Theo Pike has joined our team as the Trust’s new Trout in the Town Officer for the south of England and Wales.

Theo was one of the founders of the internationally-respected Wandle river restoration project, and he has served as the Wandle Trust’s Chair of Trustees since 2008, including its growth into the South East Rivers Trust.

In 2008 he was awarded the WTT’s Bernard Venables Prize (now known as the Wild Trout Hero award) and was recognised as a Sage Conservation Hero in 2009.

During this time he has written two books on environmental restoration and community empowerment: ​‘Trout in Dirty Places’ (Merlin Unwin Books, 2012) which profiled many Trout in the Town groups and documented the rise of the urban fishing and river mending movement in the UK, and ​‘The Pocket Guide to Balsam Bashing’ (Merlin Unwin books, 2014).

Alongside Mike Blackmore and Luke Kozak, he has also helped to mentor the CATCH Trout in the Town chapter in Wincanton, and continues to publish urban river mending and fishing news on his website www​.urbantrout​.net

Having recently relocated to Somerset for family reasons, Theo will be working closely with Paul Gaskell and other WTT officers, 2 days a week from 3 April 2018, to boost the impact of the Trout in the Town programme across the south of England and Wales.

“We’re over the moon that Theo is joining WTT. He’s been a leader in wild trout conservation for over a decade, working especially for urban rivers and their communities. We’re very excited to see Paul Gaskell and Theo teaming up as a dynamic duo for Trout in the Town”.

“I’ve worked alongside the Wild Trout Trust in the field of urban river restoration for many years, and it’s an incredible honour to have been asked to join the team and help to spread the word in many more towns and communities across England and Wales”.

If you’d like to talk to the Wild Trout Trust about improving your local urban river or stream, please contact: