Rites to Passage - why dams and weirs are being removed

The majority of our wild trout need to move. They move at different times of the year for different periods of time to different places for different reasons. It could be to reproduce on clean, well-oxygenated gravels in small tributaries or headwaters, well away from where the larger adult is typically found. It could be to seek refuge from spate conditions, or it could be to take advantage of a seasonal food source. Whichever reason, it’s an intrinsic component of their nature that makes them so interesting, so adaptable and resilient…. so iconic. And it’s not just trout. 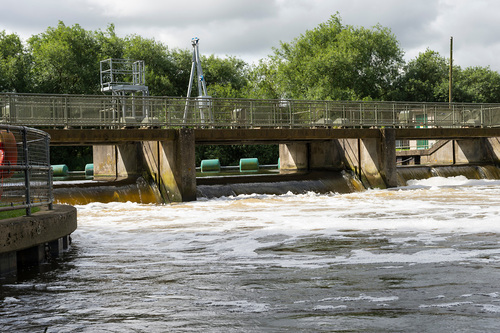 structures such as a dam or weir? No matter how small, they will be having some impact upon ecological or physical processes. Connectivity is a key issue on our streams and rivers, and our COs are often highlighting in Advisory Visit reports how much better a club’s wild populations and hence catch returns might be if such and such a weir or dam was removed or circumvented somehow. We can maintain and enhance river habitat until the cows come home (as long as they are stock-fenced so they can’t trash the buffer strip) but it will not fulfil its potential if there are physical barriers to overcome.

This is not new. Many small to medium scale projects  have been undertaken to restore connectivity, and the Environment Agency published a report in 2013 (click here to view) reviewing best practice for weir removal, lowering and modification. A key finding then was that much of the evidence for benefits (improved flow & fish passage) and potential risks (flooding & sediment transport) was anecdotal. A need to collect empirical evidence and monitor results and impacts of such projects was identified.

So it has been very interesting to see two very influential papers published in American journals recently, regarding dams and habitat restoration. One, a synthesis, in Science Magazine reflects on the evidence from an escalating trend of dam removal; 1000 in the last 100 years in the US alone but over 50% of those in the last 10 years! Key messages appear to be that the physical response in the river is rapid, as is that of migratory fish.
Sediment eroded from behind structure rapidly moves downstream if the river is allowed to redistribute it more naturally, and many rivers are soon back to their pre-dam states. Eel and lamprey populations have increased, and Chinook salmon were swimming upstream past dam foundations just days after blast removal at one site!
Perhaps unsurprisingly, the bigger the dam or impoundment removed, the larger or longer the effect felt, so generally good news for the majority of potential schemes involving relatively small obstructions that the WTT sees on UK rivers.
Click here for an abstract of this paper.

The second paper follows on from a mapping study of all the road crossings and obstructions in the whole of the Great Lakes watersheds, which is no mean feat. A staggering seven out of eight river miles was completely inaccessible to fish! The team behind the map have now developed a cost-benefit analysis to identify where environmental managers will get the ​‘biggest bang for their buck’, maximising the cost-effectiveness of barrier removal projects that also restore migratory fish habitat.
Most importantly was the impact of a coordinated approach throughout a basin, up to nine times more cost effective. And even better, aside from an interesting but rather indigestible scientific paper, they’ve created a free, online tool that decision makers can use immediately. Let’s hope that can be modified to be used on waters closer to home in the very near future.
Click here for an abstract of this paper.

For more information on weirs, culverts and barriers and their impact, click here.