WTT Conservation Officer Tim Jacklin gives an update below on a weir removal project on the Brailsford Brook. The Brook had over 40 weirs, approximately one every 40 metres. They were installed to create a series of fishable pools in a small brook, but the pools are silted and the weirs are disrupting the natural functioning of the Brook and its wildlife – including trout. You can read Tim’s Advisory Visit report here.

Following weir removal, rivers and streams will adjust to the new flow régime and this period of adjustment may need some management, as Tim describes below:

The WTT has been working on the Brailsford Brook in Derbyshire where in August 2016 five weirs were removed to improve conditions for wild trout. Follow-up work this year has included further weir removals and work to increase bank stability. A number of alder root plates from trees being removed from a nearby lake restoration project provided a great opportunity for using natural materials to stabilise the outside of a meander bend. The bend was experiencing accelerated rates of erosion, leading to widening and shallowing of the river channel. The root plates were positioned to create a new bank line, then the bank was reprofiled behind. A 10‑m wide buffer strip is to be fenced and planted with trees. The new bank provides great cover for fish around the outside of the bend and the increased stability will drive down the river bed level through scour, deepening the pool and creating good adult trout habitat. 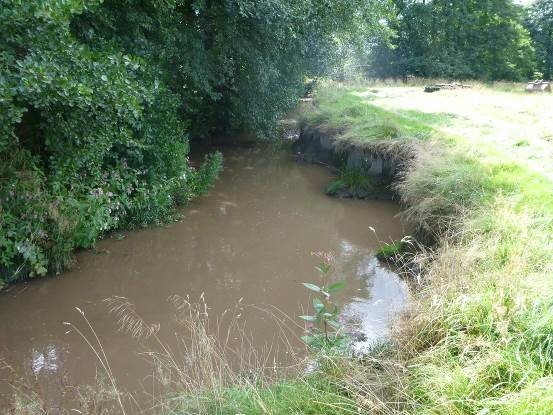 Following removal of several small weirs on the Ednaston Brook, work was carried out to increase the stability of the banks (before the works). 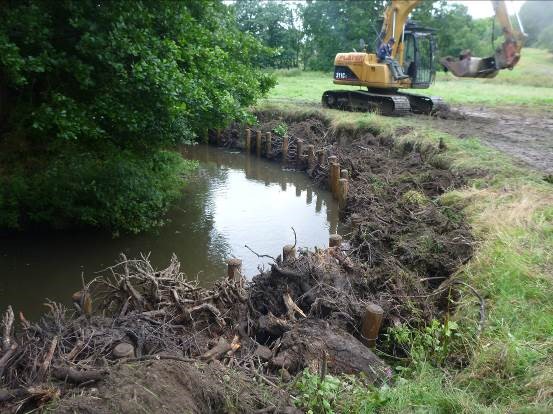 Root plates from alder trees (which were being removed from the site of a nearby lake restoration) were used to protect the outside of a meander bend. These provide great cover for fish, plus will promote bed scour and deepening of the pool, making it more suitable for larger trout. 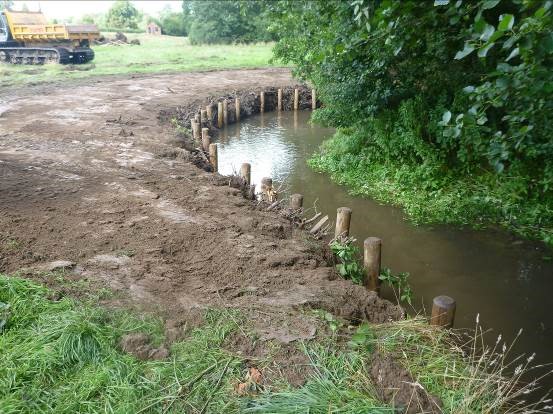 Further work will include fencing out livestock and planting trees to increase bank stability in the long term.