The purpose of the workshop (supported by WTT) was to disseminate the findings from a range of studies undertaken over recent years in the Wester Ross area by Middlesex University staff and students and SWRFT, in addition to other work undertaken by the University of Highlands and Islands in Inverness.

The presentations ranged from trout genotyping, using samples of trout from different areas of the local Loch catchments, through to parasite analysis on trout and sea trout populations. The WTT also delivered a trout habitat presentation to highlight the importance of managing the habitats that underpin the health of wild trout populations.

Many of the presentations indicated the presence of genetically distinct populations of trout living within the same catchment and even within the same loch. Examples of different groups of trout existing within the broader population are more widely accepted on better studied waterbodies like Lough Melvin in Ireland, where the sonaghan, gillaroo and ferox have long been recognised; however, it is only more recently that similar separate groups are becoming apparent in other loch and river systems as further genetic studies are undertaken. In Loch Laidon, there are at least four populations of trout, each being distinguishable genetically and visually (Members can read about this study in the latest issue of Salmo).

On the second day of the workshop, attendees participated in the sweep netting of a river mouth within the Gairloch to assess the sea louse burden on sea trout inhabiting the area. Alarmingly, the first fish sported an infestation of around 180 lice of varying life stages, which is pretty alarming. The second fish had an estimated 500 lice. This is a potentially fatal number of sea lice. To put this into context, the Scottish Salmon Producers Organisation has recently asked Scottish Government to reduce enforcement trigger levels on farms (i.e. when the farm is required to act against the lice) from 8 to 6 mature females on a single salmon. So, by implication, hundreds of lice on one sea trout is not natural!

These sea trout were captured in a loch that is situated tens of kilometres from the nearest salmon farm, demonstrating the potentially far-reaching impact of cage salmon farming on wild fish populations. Reporters from Scottish Television also attended the netting and viewed first-hand the damage caused by the lice, with the reporters suitably alarmed. It is to be hoped that their reporting of the event on STV will help raise awareness of the issues currently facing our wild sea trout.

The 2018 edition of our journal, Salmo Trutta, featured an article by Dr Paddy Gargan of Inland Fisheries Ireland, on the impact of salmon farming on sea trout. Click here for a PDF of the article.

You can find out more about sea trout on the sea trout page on this website.

A synopsis of the papers presented at the workshop is available here. 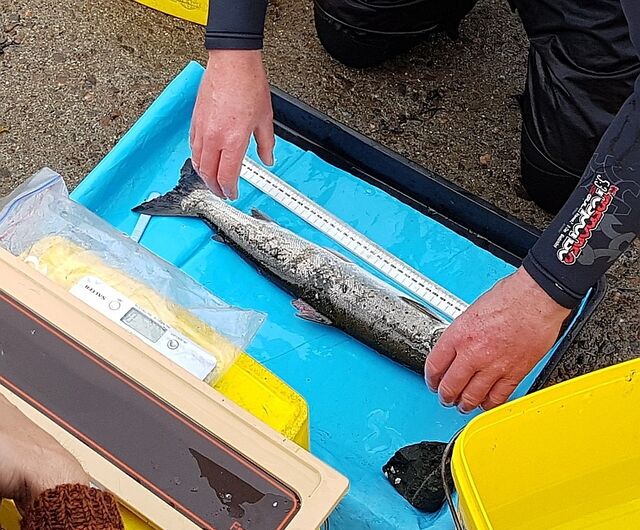