It is our experience that most river habitat projects take years to develop and come to fruition, but just days to deliver. But it isn’t always so. This fairly large scale project on the upper River Test near Andover in Hampshire was completed in less than a year, assisted enormously by the support of the Envionment Agency (EA) and the landowner.

It was delivered in November 2019 by the Wessex Chalk Stream and Rivers Trust (WCSRT), the Wild Trout Trust (WTT) and the (EA).

This blog post summarises the work. More information including before and after photos are in this report.

As with so many of WTT’s projects, it started with a walk along the river bank. The visit was carried out by Mike Blackmore, then of the WTT and the EA in April 2019.

In summary, they concluded that: 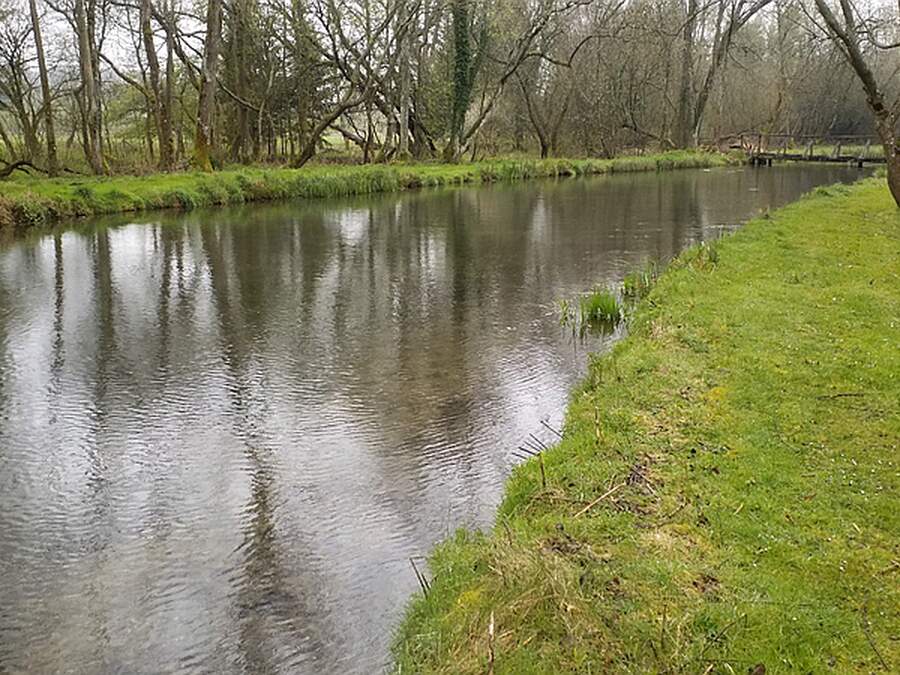 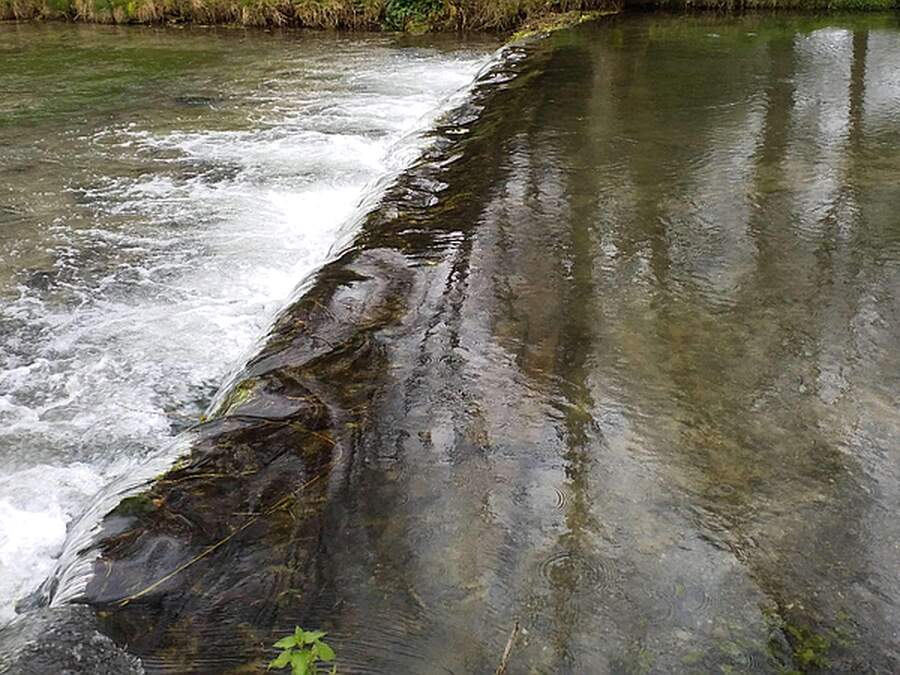 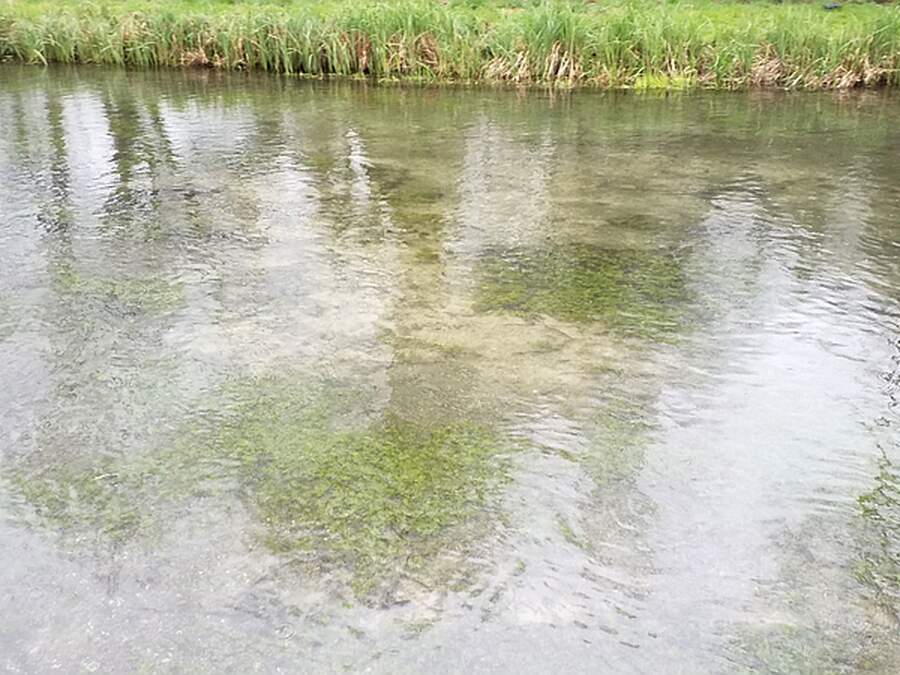 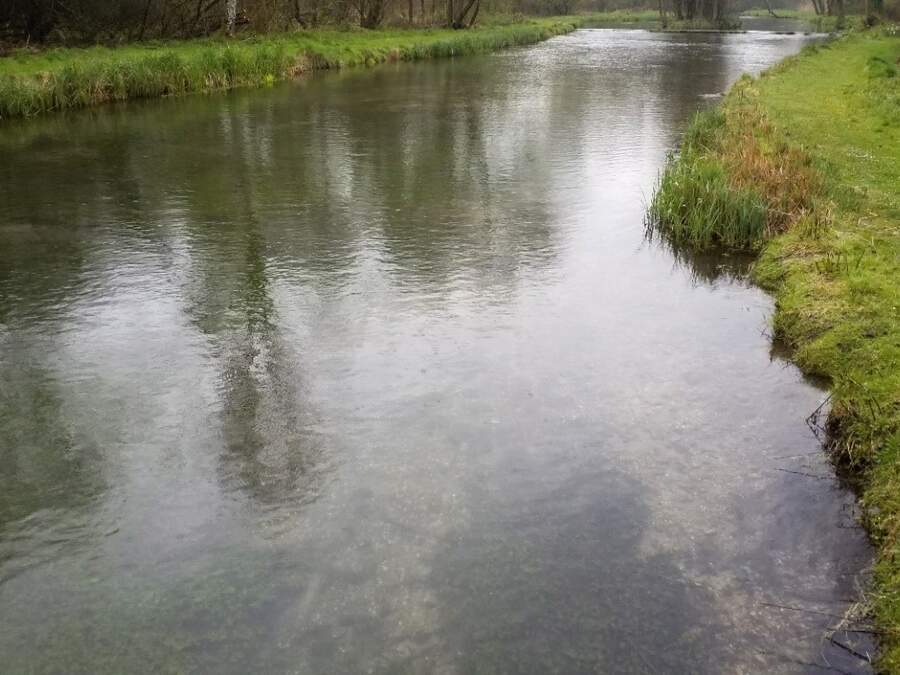 Mike Blackmore developed a project plan to significantly improve habitat by improving conditions suitable for water crowfoot and other submerged plants, marginal wetland plants and freshwater invertebrates, whilst also improving fish passage and habitat for all life-stages of wild trout and grayling.

This would require a substantial increase in overall flow speeds and flow diversity throughout the fishery and the restoration of a clean, oxygenated gravel bed. The project would also provide a greater abundance and diversity of holding habitat for adult fish, as well as improved opportunities for angling.

The design included the following:

Mike Blackmore moved to work for the WCSRT but continued to develop the project with his replacement at the WTT (Nick Lawrence) under the auspices of the EA’s Test and Itchen River Restoration Strategy (winner of the 2019 Conservation Awards) and with the support of the landowner.

The project was delivered over 15 days in November 2019 with the WSCRT (Mike Blackmore) acting as Principle Contractor working in partnership with Nick of the WTT and a team of specialist contractors.

Pre-works ecological surveys were supplemented by water vole surveys conducted by WCSRT throughout the works. Electrofishing surveys and fixed-point photography will provide the baseline for post-project monitoring and assessment.

Work in progress photos: click for a larger image. 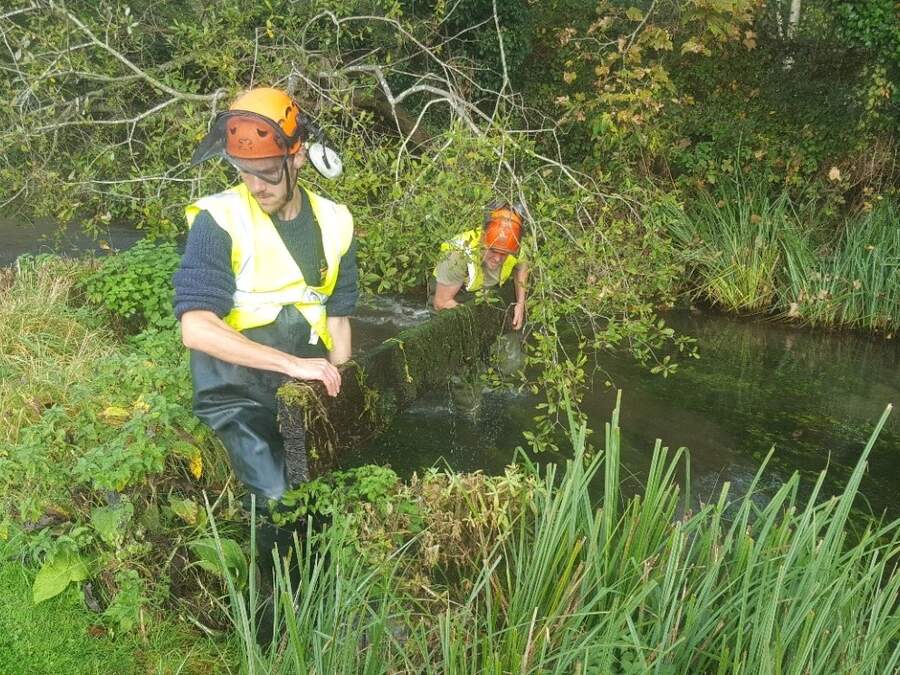 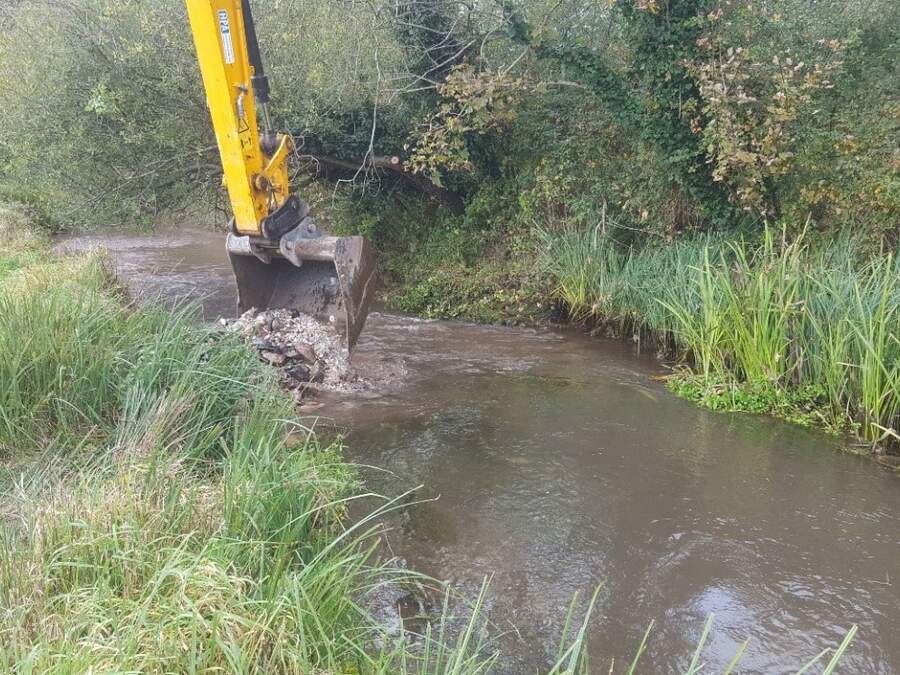 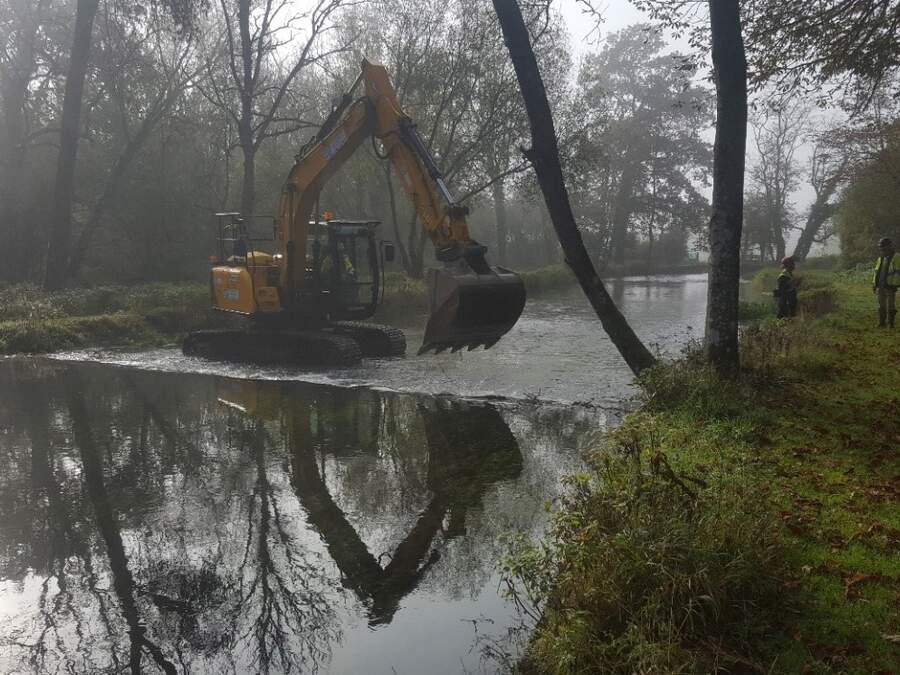 A gabion weir about to be removed 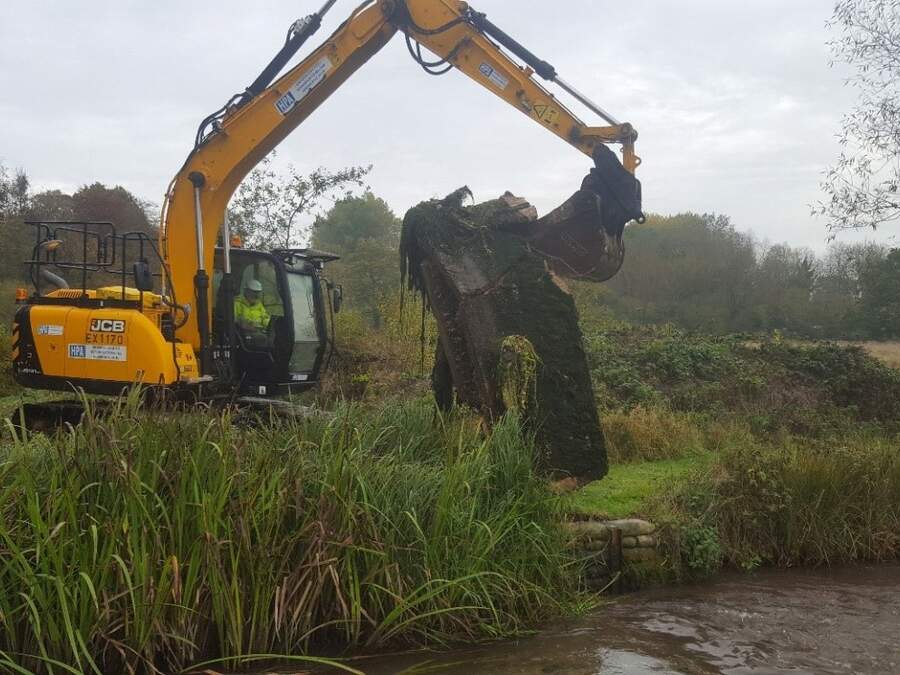 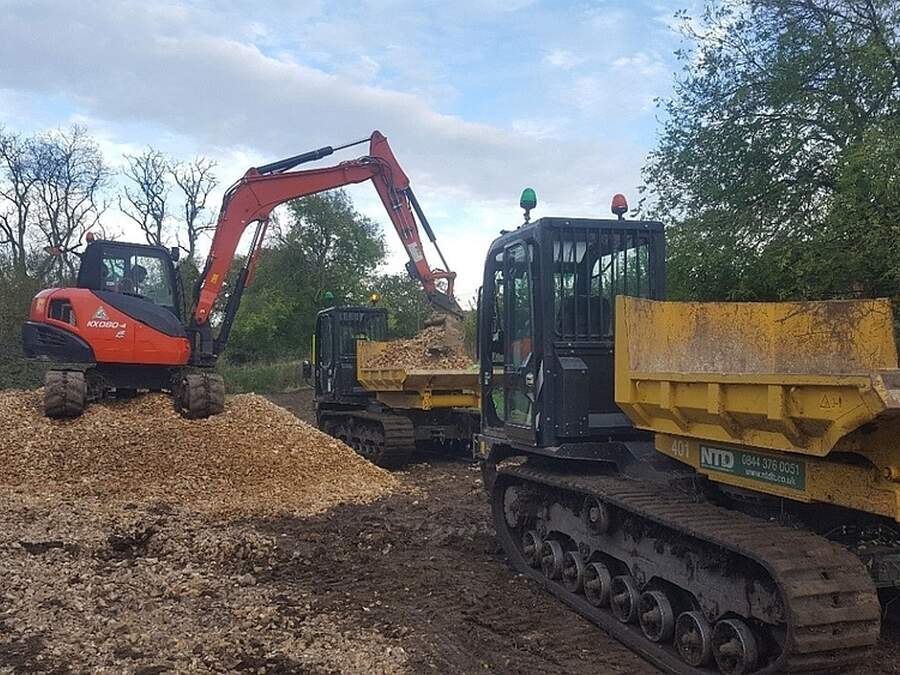 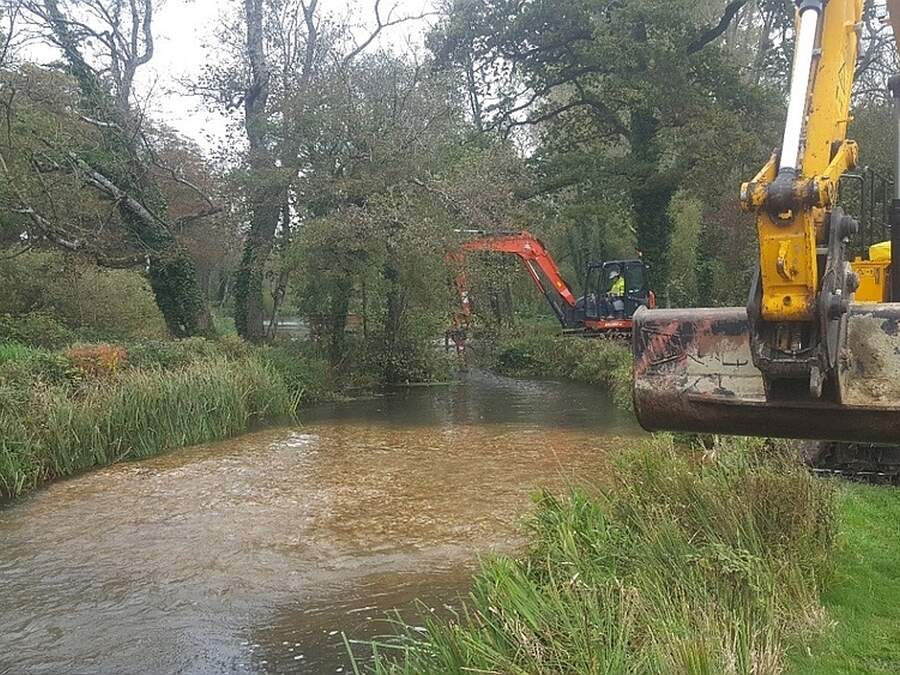 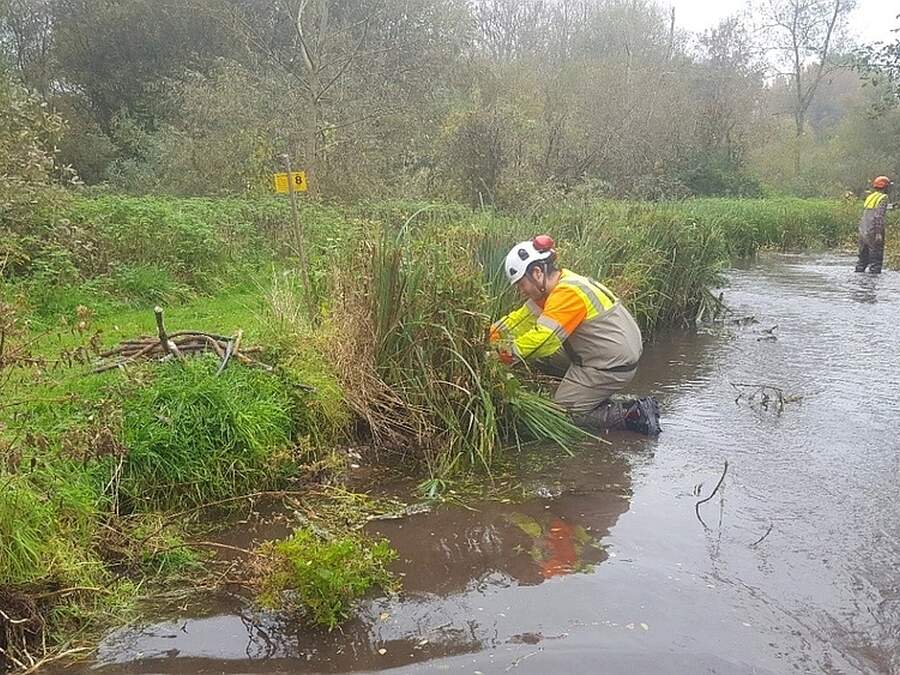 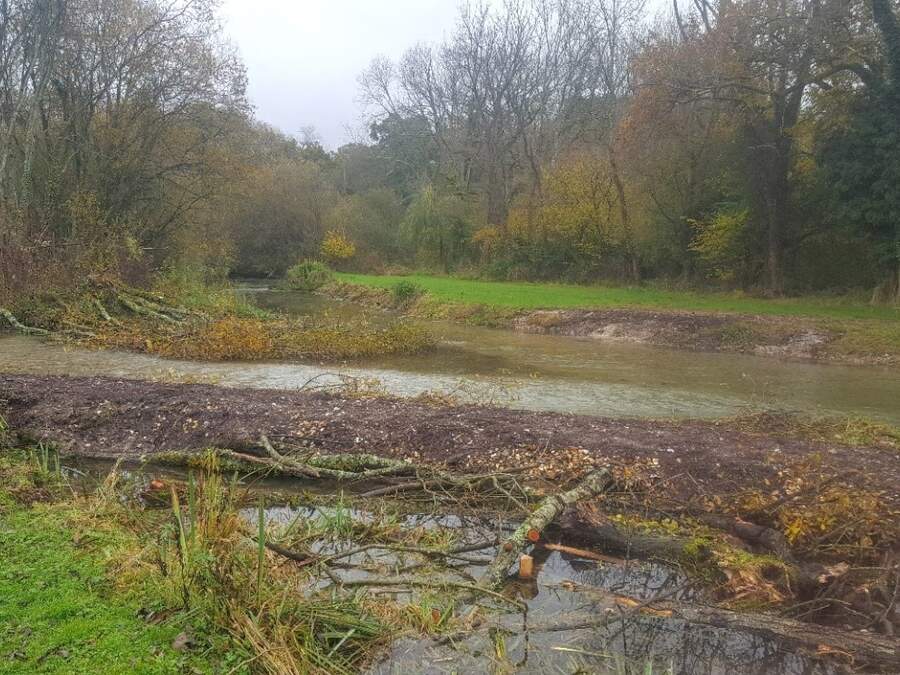 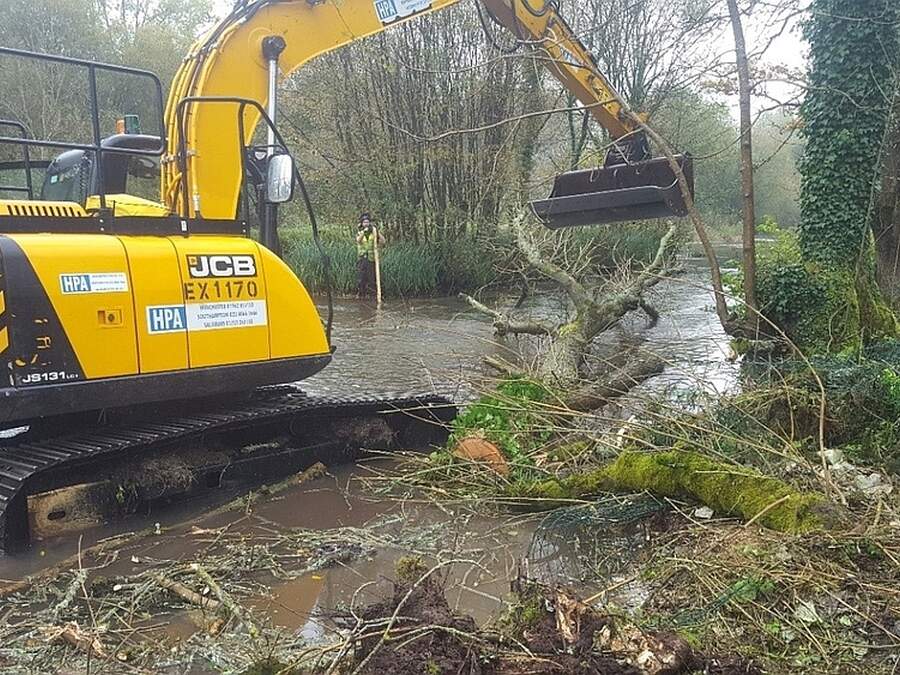 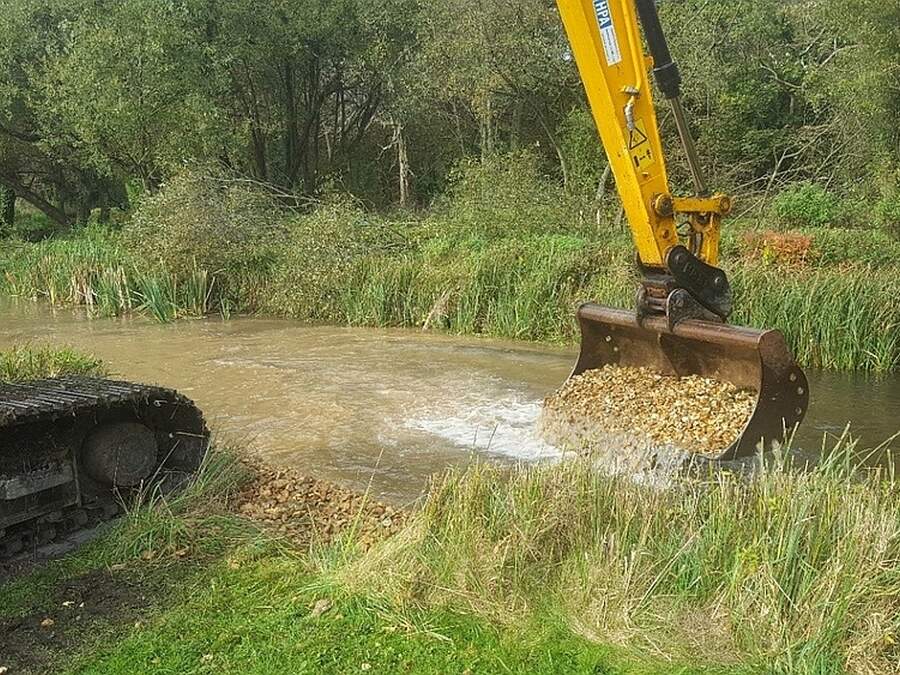 Removal of the weirs revealed a better (steeper) than expected gradient through both carriers. The resulting increase in flow speed, combined with new flow deflecting features, a more sinuous channel plan form and greater diversity of channel widths resulted in a relatively rapid redistribution of sediment. A good quality natural gravel bed emerged as flows scoured away excess fine sediment. Much of this fine sediment has deposited within, and in, the lee of new in-channel structures, kick-starting a process that is likely to result in significantly increased abundance of vegetated marginal habitat. Such was the gradient at the upstream end that an additional gravel riffle was introduced to prevent a knick-point forming and exporting too much natural gravel from this reach.

An additional angler-access berm was installed in place of a planned brushwood structure. This was to facilitate angling near a new pool that appeared once excess fine sediment was scoured away. Additional woody features were installed on the left-hand side of the island in the main carrier in order to maximise flow speed and provide optimal scour through the existing weir pool.

Between 50 and 60 whole trees/​large limbs were introduced into the river to provide coarse woody habitat and large, naturalistic, flow-deflecting woody features.

Gravel was introduced at 2 additional locations where bed topography and flows were appropriate to facilitate spawning for trout.

In order to understand the dynamics of any fish population in the main river and a small carrier, WCSRT staff carried out a survey prior to the project being undertaken. The survey team used the EA’s electric fishing equipment to survey four sites; two on the main carrier and two on the small carrier. Electric fishing equipment works by temporarily stunning the fish allowing them to be captured by the surveyor.

The pre-restoration survey results recorded a total of 7 species, including brown trout, bullhead, eel, lamprey, minnow, stone loach and 3‑spined stickleback. The most abundant species were minnow and bullhead which were found at all survey sites. All other species were recorded in very low numbers (less than 5 individuals of each species).

A post-project electrofishing survey will be undertaken in summer 2020 to ascertain if any changes in the abundance and/​or year-class can be observed. Further surveys may be undertaken over following years if funding is available. It is hoped that fish passage and habitat improvements will contribute to improved recruitment at the fishery.

Fixed-point photography will continue for several years (depending on funding) to monitor changes in channel morphology and in-stream/marginal plant communities.

Management of the fishery will continue with a greater emphasis on habitat and a ​‘lighter-touch’ approach to angler access. Discussions are ongoing regarding the cessation of stocking in one section, establishing it as a very lightly fished wild fishery.