Trout in the Town… in Baltimore!

Theo Pike reports on his recent trip to Maryland as the guest of Trout Unlimited.

I’ve recently returned from a flying visit spreading the urban river love to the US: speaking at the October meeting of the Maryland chapter of Trout Unlimited (MDTU) about Trout in the Town, ​‘Trout in Dirty Places’ and other subjects close to all our hearts, and promoting links between UK and US river restorationists.

Thanks to my hugely generous hosts, Tom Gamper, Scott Scarfone, Ben Legg, Tom Giannincini and others, I spent lots of time on local waters too, including urban rivers like Jones Falls as well as brook trout streams in the Appalachian mountains, the Gunpowder Falls tailwater, a private trout club stream in Pennsylvania, and the Western Run spring creek in upstate Maryland. 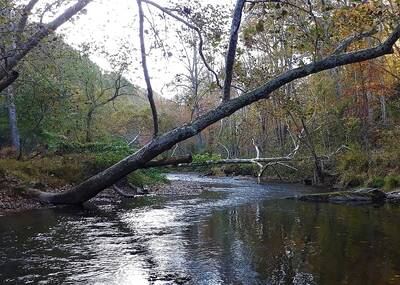 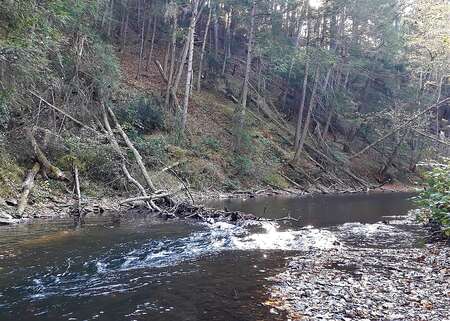 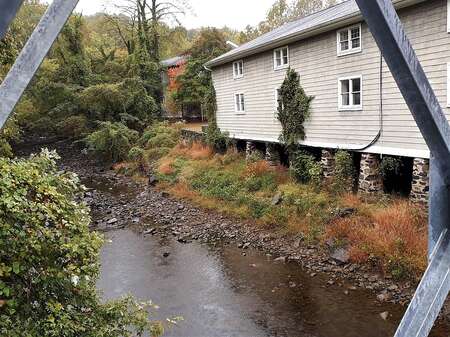 Geographically speaking, Maryland lies at approximately the same latitude as Lisbon, so summers are hot and often dry, and the lower reaches of many rivers can become too warm to support trout (although creek chubs and dace are present, as well as introduced smallmouth bass). For recreational fishing, the Maryland Department of Natural Resources stocks around 300,000 brown and rainbow trout on a put-and-take or delayed-harvest basis. Trout Unlimited also contributes to these stockings: both for educational purposes via Trout in the Classroom (which involves 23 tanks in 19 schools, 2 nature centres and 2 independent studies in the Baltimore area, and 102 schools across 7 chapters in the Mid Atlantic Council area), and for community engagement through fishing. MDTU stocks 800 rainbow trout into Dead Run, and 400 into Stony Run, for its City Catch and Huck Finn Day fishing initiatives every year, engaging up to around 180 local kids. These are the only urban streams stocked with trout by any organisation in this area, a great testimony to their water quality, and an immeasurable gift to the next generation of Baltimore’s anglers.

To fund these projects, MDTU’s annual fundraising event is the Restoration Run (I think there’s a subtle river pun in there, if you speak American): a 5k charity race which attracts 150 participants and many more supporters every year. MDTU also runs wild trout projects on the cooler headwater streams, like the upper Gunpowder Falls, with particular emphasis on restoring populations of brook trout — north America’s native char which are increasingly threatened by warming waters caused by urbanisation and climate change, as well as the impacts of invasive non-native species.

Ironically, the whole area’s two-month drought broke on the day we had set aside for a dedicated tour of Baltimore’s urban ​‘watershed parks’ – originally laid out by the Olmsted design dynasty, who were also responsible for New York’s Central Park. However, this biblical rainstorm also provided an opportunity for a classic ​‘wet weather walk’, seeing how these streams coped with a month’s worth of precipitation in just a few hours. 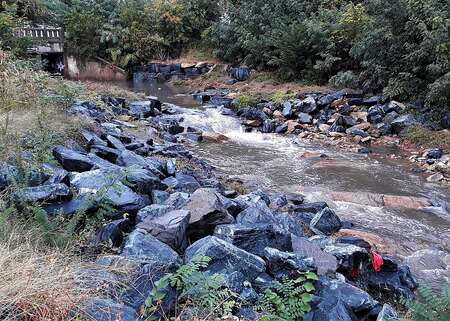 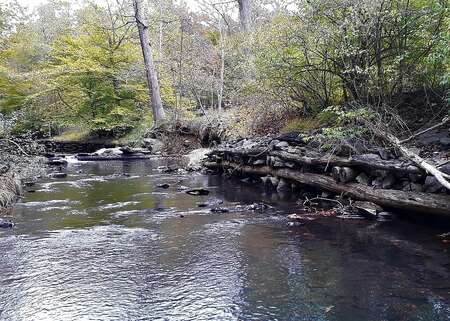 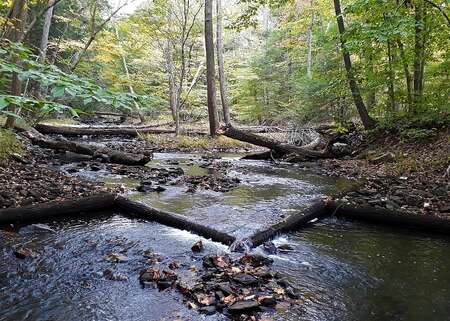 Particularly impressive were the new boulder pools (and adjacent attenuation wetland) on Stony Run – recently lifeless due to sewage pollution, and now harbouring plenty of aquatic life again, including creek chubs, black and long nose dace, and even a few surviving rainbow trout from MDTU’s Trout in the Classroom programme. Near-total river restoration was also in progress on Chinquapin Run, where the 100-year-old, seriously polluting sewer line is being replaced by the city’s Department of Public Works, and the stream channel reconstructed with rocks and gravel.

Tom Gamper, a local architect (and MDTU’s Trout in the Classroom co-ordinator), has known many of these areas since his childhood, and it was striking to sense the pride he felt in Baltimore, and the energy he and his colleagues are dedicating to improving the city for all of its communities, some still very deprived in the aftermath of the Freddie Gray protests in 2015.

During our visit to Gwynns Falls and Dead Run in Leakin Park, local residents provided us with intel about a huge recent fish kill – and they were also vehemently involved in deterring a group of Hollywood film scouts, who were looking for locations for a new movie about past murders and body dumps in Leakin Park. All this added up to a particularly poignant reminder of the historic notoriety of urban streams, and the continuing challenges of restoring both rivers and their reputations: local community stewardship is essential, wherever we are in the world.

Being familiar with classic river restoration manuals like Robert Hunt’s ​‘Trout Stream Therapy’, I also found it fascinating to walk along Big Hunting Creek, near the Joe Brooks memorial in Catoctin Mountain Park, spotting textbook river restoration structures like wedge dams, log and stone revetments, and other forms of current restrictors, in the low water conditions. These days, our emphasis tends to more natural large woody material, but it gave me a real jolt of satisfaction to see the previous generation of these structures ​‘in the wild’, in one of the places they’d first been designed to make life better for trout. 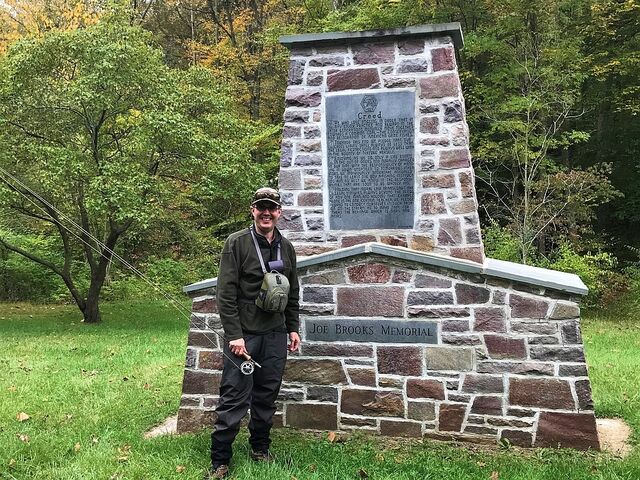 With my INNS hat on, I quickly came to recognise a range of non-native species, too. On my very first morning, Scott Scarfone briefed me on Japanese stiltgrass, now starting to monopolise forest floors across the state after arriving as packing material at the ports of the eastern seaboard. Along some stretches of Gunpowder Falls in particular, it seemed hard to find any understorey species that weren’t INNS: stiltgrass growing in tangles of greenbriar, multiflora rose and Japanese barberry. Japanese knotweed was there too, in thickets as daunting as anything I’ve seen at home, its only benefit being that it wasn’t as spiky as most of those other aliens. Maryland’s iconic native hemlock trees are also under attack by invasive woolly adelgid aphids – meaning less shade over these mountain streams, and higher water temperatures which threaten brook trout populations. 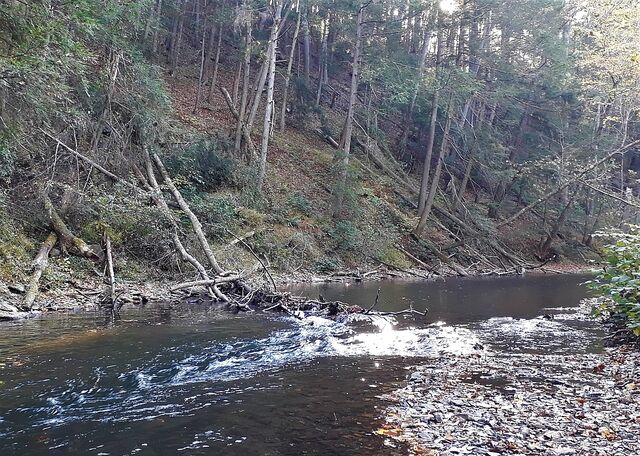 On the Wednesday evening of my stay (at the same time as the last stragglers would have been leaving WTT’s Conservation Awards, on the other side of the world!) I finally stood up to talk about urban river restoration in the UK to an audience of MDTU members, Friends of Stony Run, Herring Run, and Leakin Park, Bluewater Baltimore, and the Baltimore Waterfront Partnership. My slides were well received, the Q&A at the end was animated, and everyone seemed to agree with my conclusion that whereas it used to be said that trout only live in beautiful places, it’s now fair to say that trout can make anywhere beautiful (Dirty Places included) just by being there too. 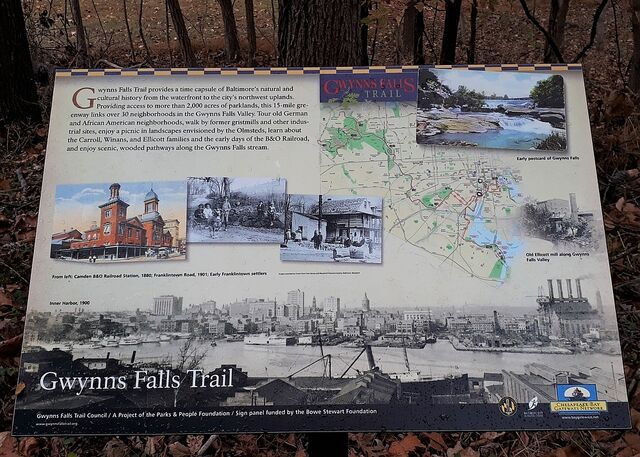 On my last morning in Maryland, Tom and I joined Jay Boynton to swing streamers on the gorgeously scenic Western Run near Lutherville. Then we took one final fling on a highly urbanised stretch of Jones Falls, where the previous hard trapezoid channel had been completely broken out and replaced with boulders and gravel, and the water was amazingly low and clear of urban runoff, despite hours of heavy rain less than a day before. I rattled what felt like a big trout right under the Baltimore Beltway: Tom had a nice one too, and I landed my first north American creek chub, another first on my species list. And then it really was time to head for my flight… 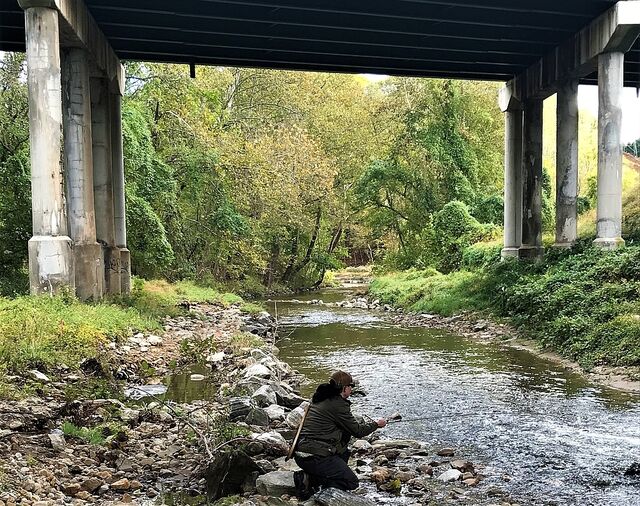 Under the Baltimore Beltway

Thanks especially to Tom and his generous hosting, these five days in the States have given me an excellent understanding of the differences and similarities between UK and eastern US urban and post-industrial rivers (and that’s to say nothing of several really excellent Baltimore brew pubs!) WTT itself was partly inspired by Trout Unlimited, so I’ve thoroughly enjoyed forging more links between us, and I hope we’ll see many more in the future.

Theo’s visit to Baltimore was generously funded by the Maryland chapter of Trout Unlimited, with an additional contribution from the Garfield Weston Foundation. 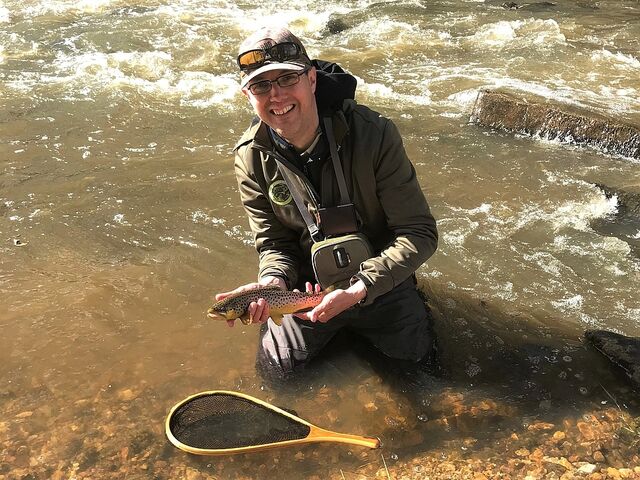