Many fly anglers will have known Vic Foot, erstwhile and legendary keeper on the River Test at Testwood and Nursling, who sadly died last week, at 93 years of age. Vic was instrumental in bringing through many of today’s riverkeepers, including great WTT friend, Donny Donovan, who’s written these touching words about his friend, THE LEGENDARY MR FOOT. 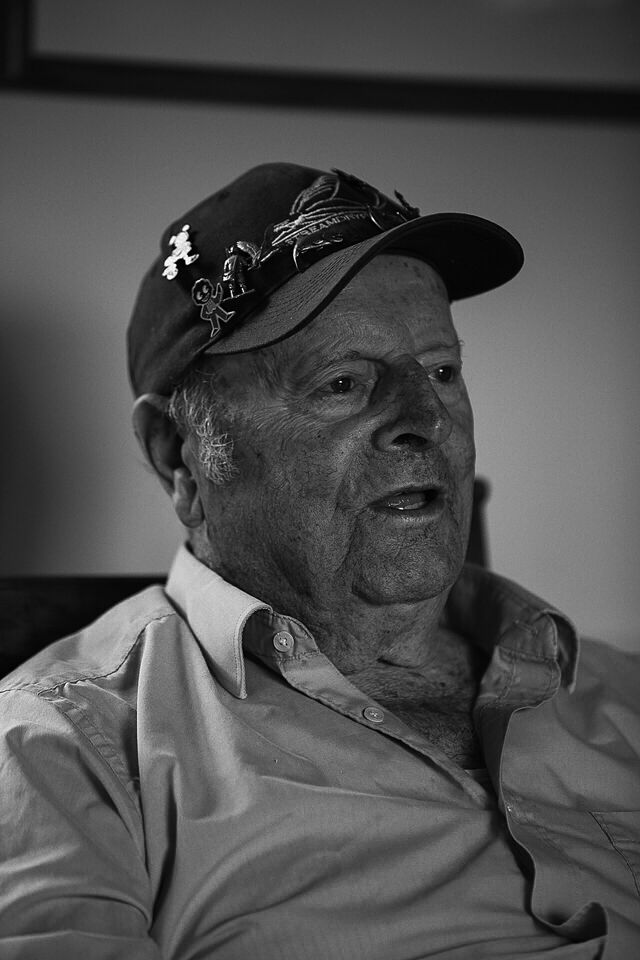 The barbeque was lit and sausages sizzling and I was sat very contented outside the fishing hut drinking a lovely cold beer waiting for the rods to return for lunch. It was a beautiful July day: the weather was good, the fishing had been great and one by one the smiling fishermen walked into the lodge with contented sighs. It was a good day to be a river keeper at Nursling. Vic was there and already entertaining with his stories as the last rod walked in and we put the steaks onto the fire. Everything was perfect as we sat down to lunch and Vic started on yet another story that we’d all heard many, many times before, until the fisherman mentioned that as he was walking back up towards the lodge, he’d been confronted by four poachers. As much as I’d like to sometimes ignore trouble, the burden of responsibility takes over and I have to sort it. I told the rods I’d be back in half an hour and made my way down to the poachers, with the usual nervous knot in my stomach.

Sure enough, the four shirtless youths were on the bottom beat and looked up at me as I walked towards them. You can tell very quickly how things might turn out and this was not feeling good; again the butterflies started and I felt that nervous energy in my stomach as my fists began to clench. After a few minutes of asking them to leave and them just carrying on as if I wasn’t there, I became aware of them looking at something behind me. I turned around to see Vic, jacket off and sleeves rolled up: ​‘I phoned the police, Donny. They said five minutes.’ The poachers quickly wound their lines in and left; me and a seventy-five-year-old warrior of a man stood glaring at them as they bundled through a barbed wire fence and scarpered across the meadows.

I’ll never forget that moment because it completely sums Vic up and even now it gives me goosebumps. It was a classic example of his loyalty, kindness and complete understanding of what he had gone through a thousand times before, mostly alone. He had followed me out of the fishing hut, leaving his dinner on the table, because he recognised the nervous loneliness that I’d suddenly found myself in.

Vic Foot was a big man, not to be messed with according to tales from his youth and was never going to be anything other than a Test keeper. He had little interest in the actual scientific workings of the river and his reply to an Environment Agency student on salmon migration and date of return was indicative of his attitude towards science-based theories: ​“Young man, you might have a lot of impressive looking letters after your name but what you say is a load of old ****. The cuckoo will be here on April 18th and the salmon a few days after that.” It goes without saying that he was never that far off. ​“Can’t beat experience, Donny, can’t beat experience.”

That’s not to say he was all sweetness and innocence! He was responsible for making me drink too much and for making me smoke too much — it was entirely his fault; he forced me to do it. He told me the same jokes and the same stories a thousand times over and it troubled me that I laughed out loud every single time.

Vic’s stories, of which there was a bottomless supply, truly were the epitome of ​‘it’s the way he tells them’.

His wonderful Hampshire accent and his unique interpretation of the English language were something to behold and an absolute joy to listen to. Every one of his sentences seemed to start with, ​‘Well, wot ​‘appened there woz’ and ended, about fifteen minutes later, with a chuckle and a wink, an unfinished tale and a wandering off to put the kettle on. ​‘Cuppa tea Donny boy?’

During my mischievous youth, Nursling and Vic Foot were considered out of bounds and the wrong side of the water meadows for us Testwood nippers although it was only a half-mile or so away and we only ventured over once. We came over with our rods and bread and started fishing on a little stretch of water we knew to be private. Fishing on new waters was very exciting although as usual, the only thing caught was one brown trout and… us by the under keeper. We were instructed to walk up Mill Lane and see the head keeper who would decide our punishment. When we got to the keeper’s cottage, he was outside saying goodbye to a couple of fishermen, so we stood in silence, heads bowed, rod in one hand, trout in the other, nervously waiting to admit to him that we’d been fishing on his river. As the fishermen drove away, the keeper turned towards us and before either of us had a chance to speak, he stared at the dead fish and then he told us to make sure we didn’t fish on his stretch of river again — or more importantly, don’t get caught fishing on his stretch of river again. With that, he said goodbye and disappeared into the house, waving as he walked through the door.

We stood there for a couple of minutes looking at each other not quite knowing what to do. Then the door of the fishing cottage opened again and he looked out, asking if there was anything else that we wanted. My mate held up his flask and asked if we could have some water. The keeper came back to the gate, took our flask and disappeared into the house again. A few minutes later he returned with the flask and said that he hoped the water was okay because it tasted a little different down Mill Lane and perhaps we should try it before we left.

We thanked him and said it would be fine and that we really should be getting home. At the bottom of Mill Lane, we stopped and opened the flask, which he had filled with beautiful, cold orange juice. I can remember standing there, all those years ago, drinking orange juice, looking at our prize capture and thinking what a kind thing to do and what a really nice man. That was my first encounter with Vic Foot.

Many years later, during my first week working as the river keeper at Nursling, I was lifting some of our belongings into one of the garden sheds when a voice called out to me. As I came out to see who it was, I caught his eye and once again felt the hairs stand up on the back of my neck.

I hadn’t seen Vic for more than twenty-five years but he’d not changed a bit. After shaking hands and him talking for half an hour, I asked him if he’d like a drink and he came into the house — the house that he’d lived in for a half century and it didn’t take long to understand the incredible respect that everyone has for Vic and that it’s quite impossible not to love him.

Early on, I found that advising experienced Nursling fishermen was quite difficult for a relatively young, new keeper. Consoling dejected anglers was also tough and after one particular morning of almost constant moaning from a disconsolate fisherman, there was a look of relief on his face as Vic walked into the lodge at dinnertime.

“Why aren’t I catching anything, Vic?” said the fisherman, with a glance at me, that said listen and learn sonny, the master will sort us out.

“Well sir, one of two reasons. Either there’s no fish in the river, or it could be that you’re just a useless fisherman. Ask Donny. He’s really good at fishing!”

I remember two fishermen who were fishing Nursling for the first time and who were more excited about meeting Vic Foot than about the actual fishing. They were staying in Romsey and they asked Vic directions to a certain hotel.

Vic replied in his beautiful, deep and mostly unintelligible Hampshire accent, ​“Now then let me see. Turn down the road where the post office used to be and then turn again. My uncle used to shoot pigeons in the meadow, there. Carry on down the road near to where Keith keeps his cattle and go to the right. When my uncle used to shoot the pigeons in the field where the post office was, they used to bet on them. Right, let’s see, go to the left and go along to the gravel pits — although they’re not there now, but where they used to be, and move to the right and about fifty yards turn left. Then you’ll turn right, and…”

After about ten minutes of this, with the fishermen looking totally bewildered, Vic abruptly said goodbye, winked at me and left. The fishermen were completely charmed by Vic and they chattered excitedly of how pleased they were to have finally met him. After singing his praises, they rather sheepishly turned to me and quietly asked, ​“When we go out of this gate, do we turn left or right?”

Vic was mischievous and always happy but he knew what he liked and was very contented with his simple pleasures. He always had a red car; he didn’t care which one as long as it was red. I once went with him to look at a second-hand Fiesta, strangely blue, at a dealer in Southampton. He took it for a drive and when back at the show room, agreed with the salesman to buy the car but, he’d like it in red please! The confused, but smiling reaction from the salesman was a very normal response to Vic.

Vic of course was a wonderful fisherman and will forever hold the astonishing record of catching at least one salmon (he caught 112 in 1956!) on the Nursling beat for 77 consecutive years. He was a fantastic fly fisher but was renowned for being able to cast a number four gold Mepps with unerring accuracy. He always lamented not being able to do the same with a golf ball! He witnessed first-hand a golden age of salmon fishing on the Test, catching fish up to 40lb, yet he’d still be shaking with excitement returning a coloured 4lb September grilse.

He met his beloved Winnie, who over the years became known as Won whilst working on the Nursling beat as a fifteen-year-old. Won lived and worked in the local Manor Farmhouse owned by her uncle and auntie which was alongside the river and Vic always made sure he was thereabouts at 10.30am when she sat on the step having her tea break. The fishermen would comment that Vic was off to see his little mermaid and to this day the breakwater there is called ​‘Mermaids.’

A truly kind and thoughtful man who I was so fortunate to know and spend many years with and whilst his knowledge of the Nursling beat was second to none and he shared with me his priceless lifetimes experiences of looking after it, it was the friendship and support that he gave to me and my family that I valued more than anything and that’s what I will never forget. Hopefully I can continue his legacy of helping and encouraging younger keepers although my advice, knowledge, salmon catching ability and certainly my story telling, will never be a match for the legendary Mr. Foot. Thanks for everything Vic and without doubt, I know that you’ve found your mermaid again.