Aerial view of the new channel on the Bayfield Estate

One of the great pleasures in working in the field of habitat restoration is re-visiting the sites of previous projects to see the fruits of your labour – and whether you got it right! Busy working lives mean we don’t do this anything like often enough, so it was a very nice surprise to see the River Glaven at Bayfield Hall in Norfolk feature on BBC Springwatch last week. The atmospheric clip was filmed by Josh Jaggard (www​.wildlife​-pho​tos​.co​.uk) and appears 31 minutes into this episode:

In 2014 the River Glaven was re-routed around a dam which forms an ornamental estate lake at Bayfield, recreating 1.2km of meandering chalkstream habitat, restoring free passage for fish and reducing silt accumulation in the lake. A more detailed description of the project shortly after completion can be found here www​.wildtrout​.org/​c​o​n​t​e​n​t​/​b​a​y​f​i​e​l​d​-​p​r​o​j​e​c​t​-​r​i​v​e​r​-​g​laven. 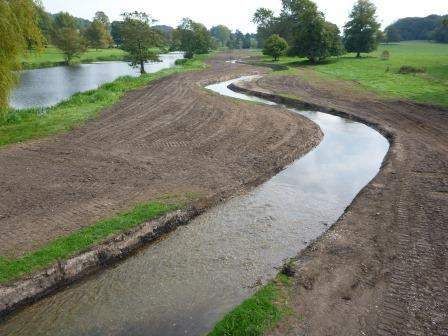 Water flows down the new channel for the first time

The river inevitably looked raw immediately after the diggers left, but subsequent work by Norfolk River Trust (https://norfolkriverstrust.org/project/a‑new-channel-for-the-glaven-at-bayfield/) and careful stewardship by the landowners has seen nature return in force. Fish surveys have shown that brown trout, bullhead and brook lamprey use the site as a spawning and nursery area, while European eels move through the river on their journeys from the Sargasso Sea to Norfolk’s headwaters. The plant and invertebrate life in the stream are now as fine as anywhere in Norfolk.

It has also been gratifying to learn that that the Glaven here is now accessible to sea trout. Early results from a tagging project show that the fish pass a short distance downstream at Glandford Mill (another WTT project completed in 2012) has been used by tagged sea trout, running upstream at spawning time and back down again – habitat restoration and reconnection in action!