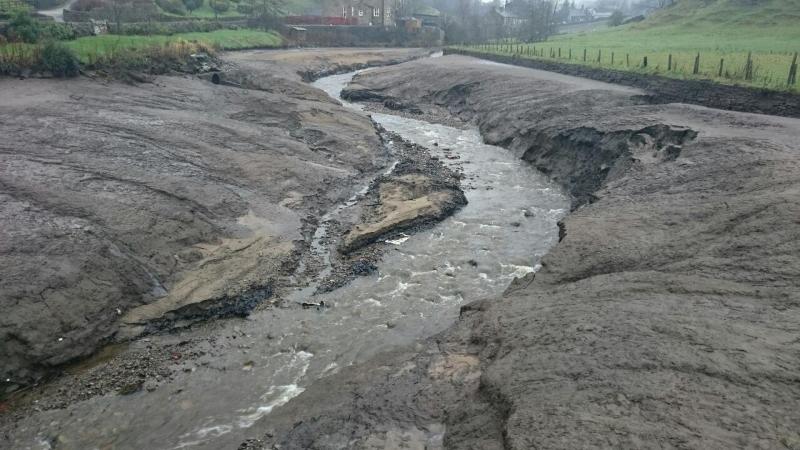 On my WTT-inspired ramblings recently, I came across a shocking sight, above. Shocking because firstly, I was expecting to see a village pond complete with a raft of local ducks bobbing around, not a barren mudscape stuck behind a defunct dam; and secondly, because I immediately started to wonder where all that accrued sediment was being washed away to….. and where it was being deposited… and might it not be being dumped upon some salmonid redds at a rather inopportune time?

And a couple of days later, I was alerted to this. The image above depicts the graphical abstract of a recently published research paper by Professor David Sear, a key figure on the WTT Scientific Advisory Panel. While fine sediments are known to be a cause of embryo mortality in benthic spawning fish species such as brown trout, most research to date has focussed on the quantity accumulating around eggs, rather than any ​‘quality’ issues associated with particular sediments.

For instance, some sediments will be mostly mineral, while others will contain a proportion of organic matter; it is the latter component which could be particularly detrimental to salmonid (and other species’) embryos because of the potential for microbial breakdown of that organic matter, thereby reducing oxygen concentrations available to the eggs.

David and his colleagues exposed the embryos of two salmonids, brown trout and Atlantic salmon, to different sediment loads from different sources. Importantly, source as well as mass of sediment affected spawning habitat quality. While brown trout were less sensitive to sediment impacts compared to salmon, both were markedly affected by sediments derived from sewage treatment works; even the results from damaged road verges was worrying.

The organic content was the key driver determining the impact of a sediment source. Moreover, the effects were still apparent in surviving alevin via reductions in mass, length and yolk sack mass relative to experimental controls, so the overall fitness of the progeny that make it through the egg stage is still compromised. Any detrimental impacts at the vulnerable alevin stage is likely to lead to population consequences later on.

This important research highlights the inadequacy of current metrics and sediment targets which are based on quantity of sediment of a given size, or total daily maximum loads, on the assumption that all fine sediments will have an equal impact upon aquatic ecology. It thus provides resource managers with the evidence to support the development of sediment screening techniques, enabling them to target particular sediment source control strategies in the landscape. Critically, these strategies must encompass the characteristics of the mobilised sediment delivered to waterbodies from specific sources and not just the proportion of different sources of fine sediment.

Being in a relatively upland location with little improved land surrounding it, and situated in a small village, I am hoping that the pond sediments I found are of low organic content. Plus, recent snow melt has hopefully flushed it rapidly through the system so it has not had time to settle on any favourable spawning gravels. Hopefully!

For access to the research paper, click here, and for further recent information on land use and soil impacts on rivers, click here to be taken to a WTT news item from last year.