While the amazing work around the world to remove huge dams and reconnect rivers tends to capture the media headlines (e.g. Dam Removal Europe), we know that small (known in the trade as low-head) structures can be equally as effective in fragmenting fish populations and interrupting sediment transport. And compared to large barriers, there are thousands and thousands of small ones, as the AMBER project has recently highlighted for much of Europe.

Through the latter part of 2019, I was involved in two projects to design low-cost fish passage solutions on two very different becks. Unfortunately, the gold standard of complete removal to reinstate all processes and negate any need for ongoing maintenance was not an option in either case. Click here to view WTT’s thoughts on weirs and related structures. 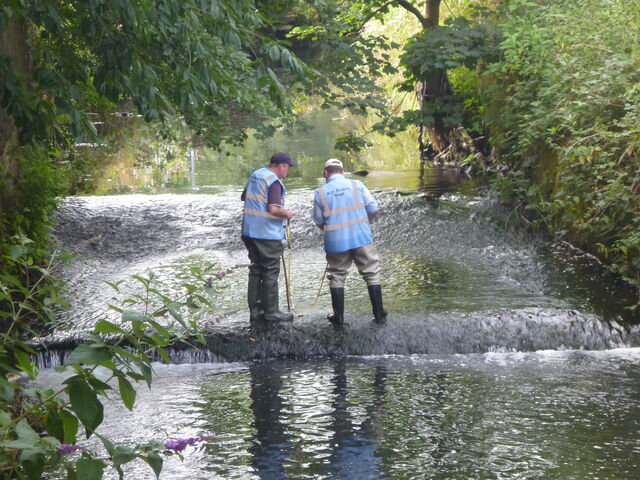 On the lower reaches of Bradford Beck, a significant tributary of the Aire in West Yorkshire, I was asked by Barney Lerner to assess options for 5 structures within 1km of the confluence with the mainstem river. Barney is the passionate coordinator of Friends of Bradford’s Becks, a group which has been influential in stimulating interest in the beck, tracking pollution, cleaning the banks, and campaigning for change for the better. Together with the Environment Agency and Bradford Metropolitan District Council, there is now a funded programme of works to improve fish passage and the riparian and instream habitat along the lower reaches.

The 5 structures were very different in function, construction, and hence passability for fish. Two were smooth concrete and dressed stone aprons associated with the footings of major road bridges – not the sort of thing Highways want ripped out! Although these aprons might not create much of an obvious ​‘step’ in the channel like a weir would, they are designed to spread the flow out and increase the velocity, effectively reducing it to a thin skim of very fast water that fish simply cannot negotiate. Many also end up being ​‘perched’ at the downstream end, where the fast water cascades off the artificial bed and the resultant turbulence erodes the natural bed material. Impoundment upstream might also prevent the natural conveyor belt of gravel resupplying the newly eroded bed. Hence, a mini weir is created, a double-whammy for the fish as they now have to leap onto an apron, only to find themselves with insufficient water to swim in! The third structure was similar in design but much steeper in gradient.

The fourth was an Environment Agency gauging weir, and the fifth a cobble weir; both of these brought different issues to the table. The cobble weir was ripe for removal completely, but readjustment of the bed upstream would probably undermine the footings of another bridge and potentially some housing estate walling, both of which had been erected since the weir was built. 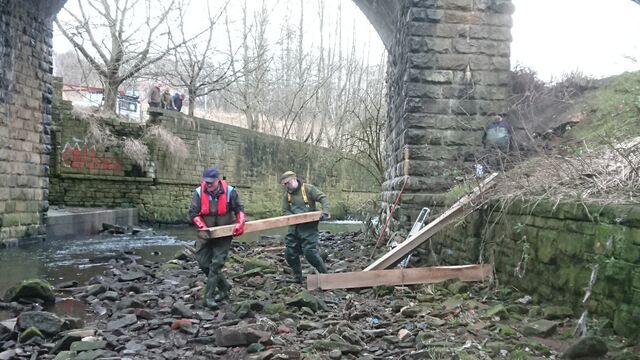 There’s no denying Bradford Beck is urban! Water quality is dubious and inconsistent, but trout continually strive to get upstream from the Aire, and rumour has it that barbel have attempted it in the past but were thwarted by the second bridge footings. Therein lies a conflict that I wrestle with. I’m making it more possible for the fish to recolonise the beck, but the likelihood of a pollution event means that those fish are in jeopardy. A fish kill is unfortunately much easier to sell to the powers that be that water quality issues need addressing. 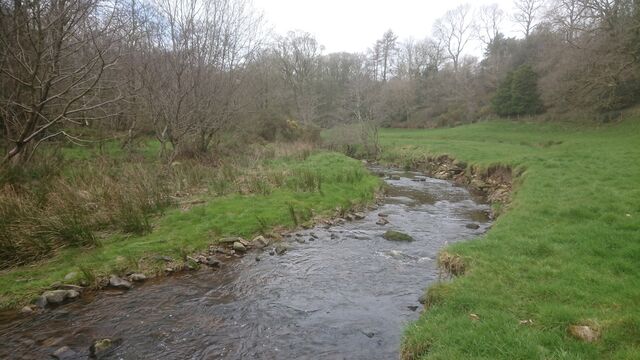 Damas Gill, a tributary of the Lancashire Wyre: the site for some habitat improvement works

Across the border in Lancashire, on the beautiful Wyre catchment, is a beck called Damas Gill. On the surface, it looks idyllic but as a professional restorationista, it’s hard to overlook the livestock grazing and poaching and other less than ideal agricultural issues. A road bridge culvert ~600m up from its confluence with the mainstem Wyre created similar problems to those found on Bradford Beck: a shallow skim of water over an apron of dressed stone. Damas Gill should be an important spawning tributary for sea trout and possibly salmon, as well as a good nursery for resident trout and some wily older fish tucked in the pools under tree root boles. Tom Myerscough, Programme Manager at Wyre Rivers Trust, is doing a sterling job improving many of these smaller but incredibly important arteries and he’d secured some funding from the EA’s Fishery Improvement Programme specifically for fish passage and habitat work on Damas Gill. 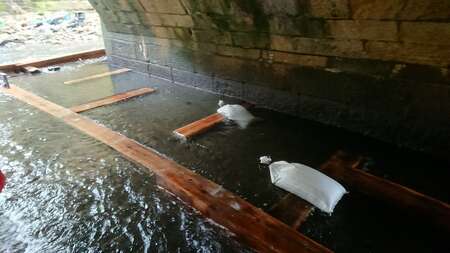 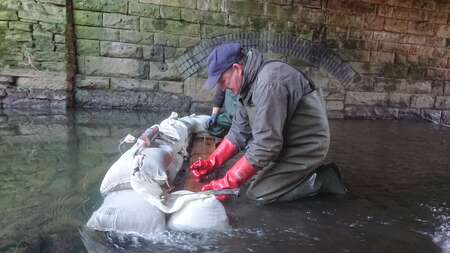 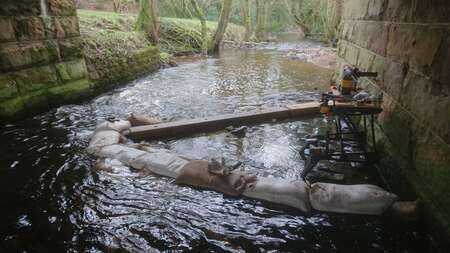 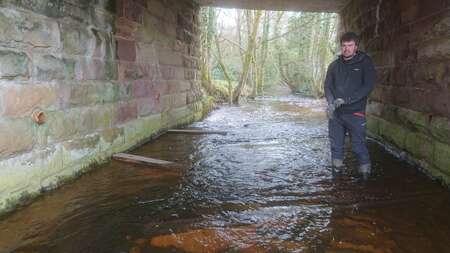 The solutions? We simply planned to interrupt the shallow fluming flow, holding back some water to create the much-needed depth for fish, and providing refuge areas, slack water, by installing green oak sleepers in various configurations. Green oak was preferred to recycled plastic given the requirement to prep much of the material on site. Sleepers were pinned in position using threaded rod ​‘chem-fixed’ with a water safe resin into the concrete or stonework. All works required flood risk consent from the relevant local authority.

Below is a condensed time-lapse video of day 1 on Damas Gill, working behind coffer dams of sandbags to install the oak sleepers. Note how shallow the water was at the start of the sequence, especially given that this was above ​‘base-flow’.

The works at each structure took an average of 3.5 days to construct and install, plus all the preparation work in terms of landowner agreement and permits. We’re now looking forward to seeing how fish populations have responded to our interventions. As a part of the World Fish Migration Day, I will be coordinating some electric fishing surveys on Bradford Beck to raise awareness — see here for details.

While the main focus of this blog has been the fish passage, each project had an element of habitat improvement in association. Below is another time-lapse of some of the work upstream on Damas Gill where we ​‘chopped’n’dropped’ a few larger trees and winched them into position to also pin in Christmas tree brash. This keeps the landowner happy as it prevents a little bit of lateral erosion but more importantly from our perspective provides excellent instream cover for wee fish from predators and spate flow. Eventually, this site will be fenced off. The changes should be quite dramatic and I’m looking forward to seeing how it develops. I’m sure Tom will keep me in the loop!