You probably know the basic story now (e.g. This Yorkshire Post article), but whether you do or you don’t, it is worth reflecting that this whole project was given the go-ahead because it tackled a number of critical problems.

A big one was the flood risk posed by blockages in the original culvert — but Sheffield CC went beyond that and created an ​“amphitheatre” shaped park that actually created even more flood-water storage than an open channel would. They didn’t stop there though, and with the help of multiple partners (including us at the Wild Trout Trust, the Environment Agency and also community volunteers from SPRITE as well as local offices such as the prestigious Jaywing advertising agency), a valuable urban green-space was created. This video explains all that (and also has a lush clip of a rising trout that made my day when I filmed it):

Here’s the really exciting thing for me though, as well as the aesthetic amenity value of the formal planting in the park’s landscape, there was also a genuine will to have meaningful ecological benefits too. This is possibly one of the Pocket Park’s greatest successes — the blending of formal/​aesthetic planting schemes in the terraces of the park with wild, native flora in and around the river channel.

So here I wanted to give a massive ​“high 5” to Sam Thorn, Jan Stratford and Simon Ogden at Sheffield City Council. They could have taken an easier path and settled for something that was pretty (but superficial). Instead they were bold enough to push forward with the very specialist conservation and biodiversity improvements advice provided by the Wild Trout Trust.

Of course the handsome chunk of funding from the EA was critical, thanks to Jerome Masters (those funds were fed into an intimidatingly complex series of other funding streams that included Interreg North Sea Region, SCC Breathing Spaces/​South Yorks. Forest SEEDS project etc. etc.).

Also, thanks to Salix RW Ltd. for the donation of additional (FOC) pre-established, native flora coir pallets and rolls to the Sheffield Trout in the Town group — SPRITE.

If you want to check out the video in full-screen (rather than as embedded above), just click on the picture below and you can jump to view it on Youtube: 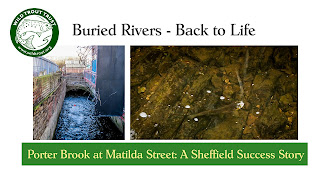