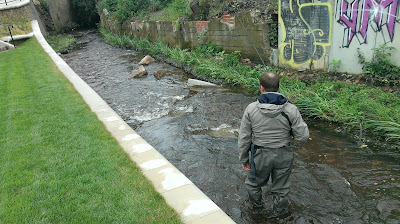 As near as I can work out from the archaeology report, this section of river — recently brought back to the surface in dramatic fashion by Sheffield City Council, the EA and the WTT partnership — was buried in a low brick tunnel somewhere around 1853 to 1868. The northern half of the site was certainly buried underground BEFORE the time the 1853 map was produced.…and the rest of the brick tunnel was placed over the top of the stream before the map of 1868…

Of course, it is not easy to tell what the water quality was like in that section even BEFORE the stream was buried…and whether there were trout surviving in the stream when it was sealed underground…

What is damned sure is that you couldn’t wave a fly fishing rod around in that underground tunnel once they’d built it!

This was still the case until the completion of the massive project to remove the brickwork and create an attractive ​“pocket park” in the city centre. You might have seen from This Previous Blog Post that SPRITE have already been finding some wonderful invertebrate life here.

So, unless some other optimistic urban fly-rod explorer tried their hand between the completion of the project and when I was fortunate to revisit the site and show it to the judges of the Canal & Rivers Trust’s ​“Living Waterways” competition, I think the little chap below COULD be the first wild trout landed on a fly for at least 160 years from this section of stream. 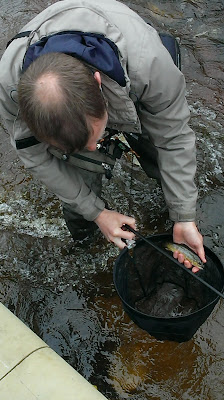 Now, that is not a very big fish, but everyone (especially me) was absolutely delighted to see it, briefly, up close before releasing back to its new home. On a personal level, because my other great passion in life is Japanese fly fishing, I am also tickled pink to make the capture with the tenkara methods that have been used in Japanese mountain streams throughout history.

The photos were taken on a visit that took place back in June, and I was back on site yesterday to join in with some of the interviews that were being recorded as part of the Living Waterways awards. I’m keeping everything crossed that this excellent partnership project will win through against some stiff rival projects — and it is fantastic to learn that it has been shortlisted as a finalist…

So watch this space and — either way — the re-connection of a little urban stream to the surrounding community and the creation of new habitat for riverside and aquatic wildlife is a great result already.

Big thanks to Simon Ogden for letting me use his photos to prove this isn’t just a tall story!