Eastburn Beck is a tributary of the River Aire in Yorkshire. It is typical of a northern freestone stream / river that has had a chequered history with industrialisation, and as a consequence, it has lost some of its vitality to the constraints of walled banks and a host of weirs. The walls keep long sectio 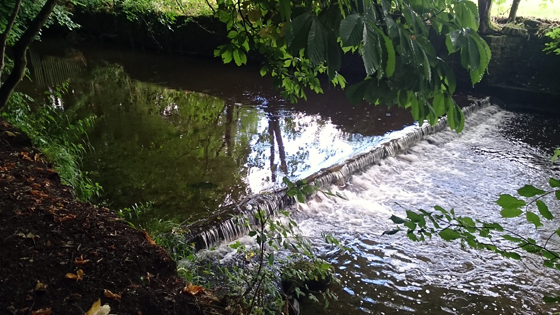 ns straightened and have allowed housing to develop on what would have been a far more sinuous, meandering floodplain. The weirs interrupt the natural progression of pool-riffle sequences and have choked the supply of gravels downstream.

The result is a series of impounded shallow sections with uniform depth, flow, and substrate on the bed, and little in the way of cover within stream. While some of the overly wide, shallow sections with plenty of jutting stones creating small pockets of turbulence provide excellent habitat for juvenile trout (and is also favoured by the local pair of dippers), there is a distinct lack of spawning, fry and adult holding habitat.

Trout can be observed in the impounded sections, but that’s not really good news as it is likely that they can also be easily picked off by predators such as heron, goosanders and mink. There is simply very little habitat structure to provide refuge.

As part of a funding bid with Pete Turner (Environment Agency, and driving force behind the Upper Aire Project which recently won the Large Project Category in the WTT Conservation Awards), and in close collaboration with Don Vine (Yorkshire Wildlife Trust), I have put together a proposal to ​‘rewild’ some of Eastburn Beck. This is following up on some valuable pilot work by Kevin Sunderland (Aire Rivers Trust) to address connectivity issues. The aim is to improve the habitat for invertebrate and fish communities alike — and by improve, we mean we want to diversify the habitat and make it into a richer mosaic of habitat types which will cater for all life stages of bugs and fish.. This will involve exploiting some of the weaknesses in t 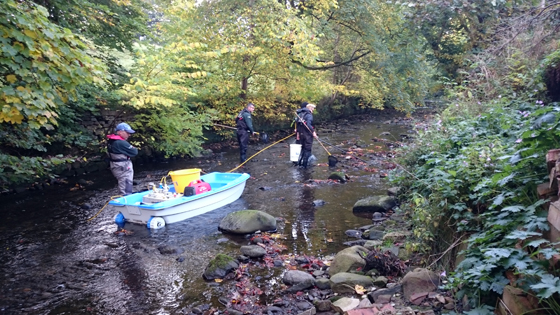 he redundant weirs and then letting the coming winter spates do some reorganisation of the gravels into hopefully a more natural channel form (yet still within the confines of the walls). Then we will assess what further augmentation is required.

But how can we measure the success (or not) of our venture? Before we do anything in river, it is important to collect some background and reference data. Essentially, we are conforming to a Before After Control Impact (BACI) experimental design. Sampling before and after any remedial work at the impact sites can be compared to samples before and after at unaffected reference (control) sites; we would expect negligible or little change at the control sites and hopefully some measurable positive changes at the impact sites!

So, to get the ball rolling, Pete organised colleagues from the Environment Agency Yorkshire & No 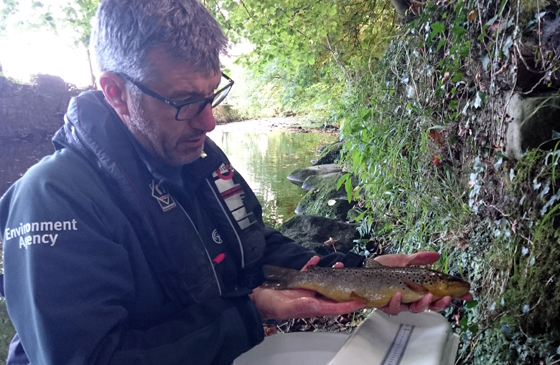 rth East fisheries team to electrofish 50m sections of Eastburn Beck and conduct a preliminary River Habitat Survey for those same sections. A more detailed report will be forthcoming but the population of trout was lower than might be expected, and the size distribution heavily skewed towards smaller individuals, as one might predict from the current habitat available. A few bullhead were also evident.

The next step is to initiate some riverfly monitoring and to hopefully engage with the local community who seem very passionate about the beck where it flows alongside Lyndhurst Wood near Glusburn. Keep tabs on the development of our project here.