NoWPaS, the International (formerly Nordic) Workshop for PhD and post-doctoral fellows working on anadromous Salmonids, is an annual workshop which consists almost entirely of early career researchers (ECRs) with a focus on PhD students. The workshop, organised by a committee of PhD students, allows a small group ECRs to present their research programme and ideas, along with any results that they might have already collected. The workshop is mobile in that each year it is hosted in a new country. In the past, it has been held in Norway, Finland, Canada and the United Kingdom. The NoWPaS 2019 meeting was held in the Loch Lomond and Trossachs National Park, Scotland, at the Scottish Centre for Ecology and the Natural Environment (SCENE), the University of Glasgow’s field research station. Twenty-nine Masters and PhD students, and Post-Doctoral fellows attended NoWPaS 2019, along with four keynote speakers and four invited speakers, from 14 countries.

Delegates and Keynote Speakers of NoWPaS 2019 stood on a bonny, bonny bank of Loch Lomond

Presentations were separated into three broad categories – Ecology and Ecosystems, Conservation and Management, and Salmonics and Physiology (sponsored by the Fisheries Society of the British Isles). We were honoured to be joined by four prolific keynote speakers who could talk on one of each category. Professor Neil Metcalfe from the University of Glasgow discussed recent research from his group on the ecological impacts of individual variation in metabolic rates in juvenile Atlantic salmon. Dr Lisa Crozier from the National Oceanic and Atmospheric Administration (NOAA) Northwest Fisheries Science Center, presented work about monitoring the vulnerability of salmon to climate change, focusing on rivers in the north-western United States of America. Dr Holly Shiels from the University of Manchester talked about the effects that elevated temperature and toxicants have on trout hearts and cardiac rhythms. The final keynote talk was delivered by Dr Phil McGinnity from University College Cork, and covered a wide range of applications for molecular methods in studying salmonids, including investigating introgression between wild fish and hatchery escapees.

In addition to our four keynotes, we were also honoured to have four invited speakers attend and present at the workshop. Professor Felicity Huntingford gave a riveting presentation on how smart fish are, and how that matters to both researchers and recreational anglers. Professor Colin Bean from the University of Glasgow and the Senior Science and Policy Advisor for Scottish Natural Heritage (SNH) discussed the ups and downs of salmonid management in Scotland. Professor Jon Grey of the Wild Trout Trust (WTT), a major sponsor of this year’s NoWPaS workshop, presented work carried out by the Trust in restoring river connectivity, and highlighted the ability to do so on a budget. Our final invited speaker was Professor Colin Adams from the University of Glasgow and director of SCENE, who delivered a talk on the adaptive radiation seen in the Arctic charr, considered to be one of the most morphologically plastic vertebrates in the world.

The three categories were further filled by the excellent presentations of our ECR delegates. These presentations predominantly related to Atlantic salmon, but also covered brown/​sea trout and Arctic charr. The topics ranged from population and individual scale genetics to gut-microbiome and physiology, and from movement and behaviour ecology to long-term trends in salmonid population fluctuations from historical datasets.

Further to enabling ECRs to meet and exchange information, a key aspect of the NoWPaS ethos is to allow delegates to experience and learn about the salmonid research carried out in the host country, and to immerse themselves into the culture. Prior to the start of NoWPaS 2019, delegates were taken to the town of Pitlochry, home to the Marine Scotland Science Freshwater Fisheries Laboratory, as well as the Scottish and Southern Energy (SSE) hydropower dam, complete with a pool-and-orifice fishway installed in 1951. During our visit, SSE biologist Alastair Stephen delivered a talk on the history of the dam and fishway, and detailed the current practices being used in Scotland for monitoring salmonids in rivers. While in Pitlochry, delegates were also treated to a tour of the local Blair Athol whisky distillery. Whisky distilleries are a fundamental part of Scotland’s culture and are often associated with salmon-producing rivers. Further activities involved a hill-walking history tour of southern Loch Lomond, fly fishing tutorials and trials in Loch Lomond, and an evening of traditional Scottish dancing known as a Ceillidh.

After the conclusion of very successful workshop, the committee for NoWPaS 2020 was formed by volunteers from the 2019 delegates. The new committee is already hard at work to deliver an expectedly great NoWPaS 2020, which we are excited to announce will be held in Laugarvatn, Iceland (dates TBA).

If you are a Masters or PhD student or an early career Post-Doc and are interested in attending NoWPaS 2020, please follow us on Twitter (@NoWPaS), Instagram (@nowpas), or request to join our Facebook group (NoWPaS-Salmonid Network). We will be posting updates about how to register later in the year. The gripping enthusiasm for keeping the NoWPaS momentum going at the end of the meeting guarantees that the workshop continues to be a favourite among salmonid biologists!

One of the main principles of the workshop is that it is free to attend for all participants (keynote speakers included). Transport costs are covered for the invited scientists, along with accommodation and food for all participants. To our knowledge, no early stage researcher has ever been unable to attend a NoWPaS workshop due to financial constraints. It is something we are extremely proud of and this principle would not be possible without the generous support of all our sponsors, shown below. 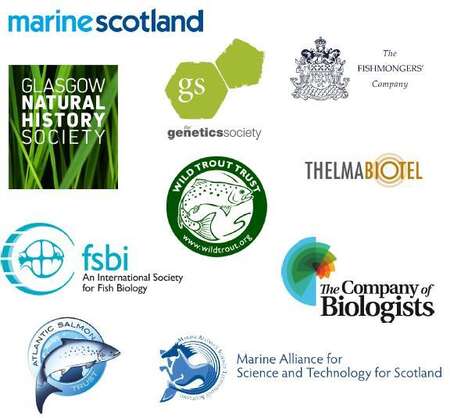