A guest blog post from Lennard Powell of the Afan Valley Angling Club near Neath in South Wales. The Afon Afan and the Nant Clais, like too many rivers across the UK, suffers from sewage pollution and excess sedimentation. Lennard and his fellow members have carried out a detailed investigation and the resulting report has been passed to Dwyr Cymru Welsh Water ( who are a ​‘not for profit’ water company) and the regulator in Wales, National Resources Wales. Receipt of the report has been acknowledged and we await with interest to see what action will result.
This map on the Rivers Trust website identifies where the sewerage network discharges and overflows into rivers in England and Wales.
Andy Thomas of the Wild Trout Trust carried out an Advisory Visit to the club’s 17 miles of water in 2010.
Lennard can be contacted at lennard.​powell@​ntlworld.​com

This year marks the 70th anniversary of the Afan Valley Angling Club. The Club was founded in 1951 by a small group of steelworkers and colliers who after finishing their shift would go to the river and drown out the labours of a shift by fishing for wild brown trout and sewin (sea trout). These men often dreamt of salmon returning to the river Afan as salmon had not been seen let alone been caught since 1860. But the salmon did return, sadly for some of those founding members all too late. In 1988 the first salmon since 1860 was caught in the River Afan. Water quality has improved in the Afan since the days when the valley was heavily industrialised with coal, iron and copper works and only the mine water emerging from abandoned mine workings remains.

The old industries which once polluted the Afan have been replaced with a new industry which threatens the river and its ecosystem, ​‘The Water Industry’.

In the past three years Welsh Water has discharged raw sewage from a Combined Sewage Overflow (CSO) into the Nant Clais 251 times. The River Afan has very few spawning streams and one of these is the Nant Clais which was at one time a haven for returning salmon and sewin to spawn.
With its natural gravel, well oxygenated water, and sheltering brush growth on the banks the Nant Clais was a treasured habitat for migratory fish and brown trout. That is, until a Combined Sewage Overflow was installed by Welsh Water to discharge into this once pristine brook. Then the regulators seem to have allowed a housing developer to discharge silt from a building site into the Nant Clais; It may be that this is the same silt that is present today some 10 years on.
Natural Resources Wales visits the Nant Clais from time to time to look at the silt, but nothing has changed. Welsh Water adopt a similar approach to the CSO. They have discussed an option suggested by the Club of diverting the outfall of the CSO from the Nant Clais to the main river Afan to seek greater dilution of the discharge, but as always lack of finance seems to be an obstacle.

I do wonder why any business seems willing to sacrifice its reputation as a caring and environmentally minded company for the sake of a few thousand pounds.
And I wonder sometimes what the founders of the Club after finishing a hard shift would have thought of their river today? 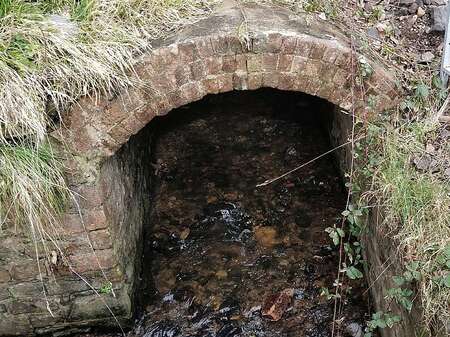 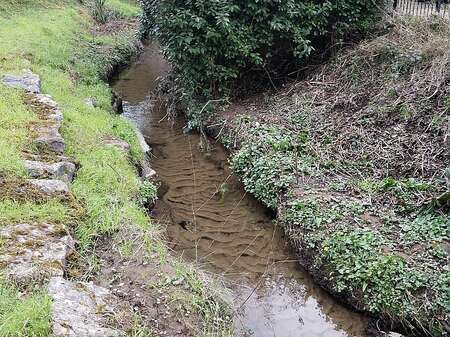 Left — the Nant Clais under a culvert upstream of the silted area.
Right — downstream, with a tremendous accumulation of silt on the river bed.