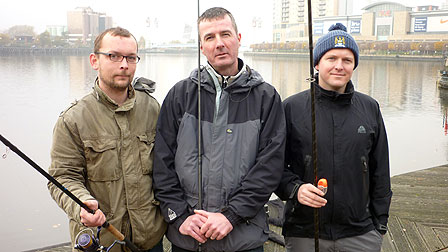 Valuable proof that anglers and community interest groups can be taken seriously by large companies (as well as government bodies) was ably demonstrated yesterday during a meeting convened by the formidable Mike Duddy of Salford Friendly Anglers (centre of picture above).

Discussions over the current (and future-planned) status of a range of Combined Sewer Outfalls on the Irwell system were held at Mike’s offices in Salford. Presentations by network managers and external affairs representatives of United Utilities (the local water supply company) were combined with debate over conditions in and around the river.

I’m pleased to have been able to support the group in getting to the stage in the discussions through some assistance in data crunching and interpretation that allowed the ​“priority” discharges affecting their rivers to be identified based on reported chemical discharge information. Coupled with detailed local knowledge from anglers such as Arthur Hamer on the observed performance of outfalls — a useful exchange of information occurred; enabling plans for exploring collaboration and partnership efforts for the benefit of the condition of Greater Manchester rivers to be made.