Hydropeaking – can the impacts on salmonids be reduced?

Freshwater scientists have been studying the phenomenon of ​“hydropeaking”, the artificial variation in flow below hydropower plants, for around 25 years. One particular aspect has been the harmful effects of flows, fluctuating in some cases on an hourly basis, upon salmonid fish species. In response to the growing awareness of the need to reduce the impacts of hydropeaking, a team of freshwater ecologists and engineers recently published a timely review article. One of the authors, Daniel Hayes (a PhD candidate at the University of Natural Resources and Life Sciences, Vienna) tells us a little more about the issue.

It can be quite lucrative to operate a hydropower plant according to the current market demand – turning the turbines on when prices are high and turning them off when rates are low. Moreover, in light of growing shares of other renewable energy sources such as wind and solar in Europe, such an operation mode from a large-scale perspective might be crucial to maintain stability in the electrical grid. Peak-operating hydropower plants are a common sight, especially in mountainous regions such as the European Alps, as they mostly utilize a large reservoir with high-head drops.

However, such an operation mode, called hydropeaking, leads to a discontinuous release of water downstream of the turbines. A river reach subjected to hydropeaking effectively experiences a series of artificial floods on a sub-daily schedule. Typically, hydropeaks exhibit higher rates of change than natural flood events as the river flow moves from baseflow to peak flow and vice versa). The duration usually ranges from hourly rates to 12 hours or more.

From an ecological perspective, hydropeaking results in numerous adverse consequences. Unsurprisingly, it has been described as ​“one of the most significant impacts on rivers downstream of dams.” Fish communities in particular are severely threatened by pulsed flow operations as they can be affected, among other impacts, by stranding (Fig 1) and drift, and dewatering of spawning grounds (Table 1). 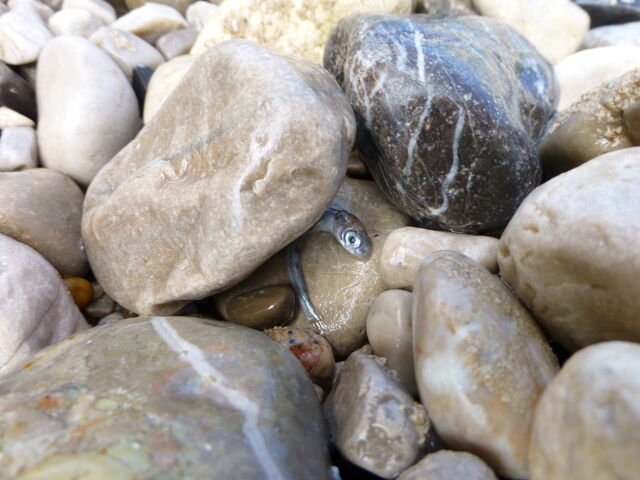 The phenomenon of hydropeaking has been studied since the 1990s but has received more focus in the last few years, in part due to the EU Water Framework Directive which demands the mitigation of related ecological impacts to achieve a good ecological status. However, the Directive does not specify methods nor targets or thresholds regarding hydropeaking mitigation.

To assist in the process of attaining the goals of the Water Framework Directive, I was part of a team of scientists from the University of Natural Resources and Life Sciences, Vienna, Austria and the University of Lisbon, Portugal, and together we formulated a concept paper on ways to mitigate adverse hydropeaking impacts on fish. ​‘Life Stage-Specific Hydropeaking Flow Rules’ was published in 2019 in the open-access journal, Sustainability.

As we dug into the literature, we discovered that each life cycle stage of a fish – migration and spawning, egg incubation and alevins, fry emergence, and early juvenile – can show a distinct sensitivity to different aspects of the hydropeaking hydrograph. The key parameters for flow restoration will vary between life cycle stages and between species; an important aspect to consider for river managers. 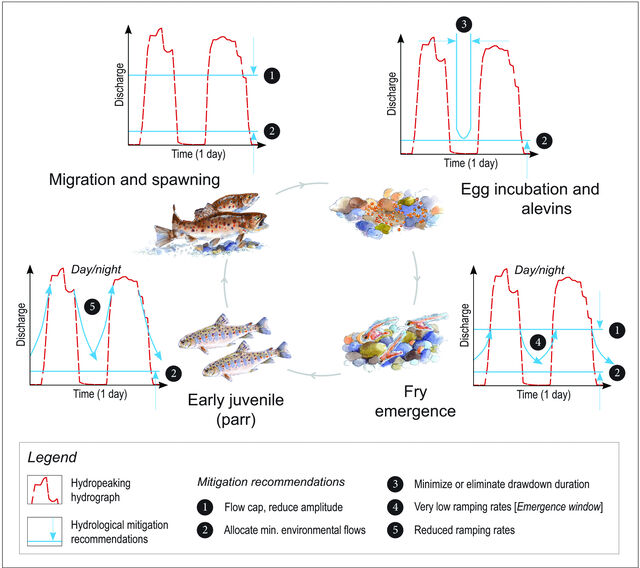 Drawing from and synthesising the current scientific literature, we summarise how hydropeaking influences each life cycle stage of salmonids, and conceptualise a qualitative mitigation framework which is based on seasonal flow regulations to protect ecologically sensitive life cycle stages. A summary of our main recommendations is as follows:

The mitigation framework as presented aims to reduce the environmental impact of hydropeaking rivers while maintaining flexible energy generation.

Current knowledge points to reproduction and early life stages as the most sensitive ones. In Austria, for example, several studies have been conducted using an amazing experimental facility: the Hydromorphological and Temperature Experimental Channels (HyTEC). In essence, HyTEC comprises two large channels (40 m length, 6 m width) fed with nutrient-poor lake water which can be taken from different depths in the supply reservoir to vary water temperature. To date, it has been used to test for single and combined effects of river flow, riverbed morphology and temperature on fish. Peak flows of up to 600 l/​s can be produced to mimic hydropeaking and extreme floods. Experiments have demonstrated under what conditions hydropeaking leads to stranding and drift of juvenile European grayling (Thymallus thymallus) as well as of young-of-year brown trout (Salmo trutta). These studies were critical in the establishment of flow thresholds and led to the first proposal of the idea of emergence windows whereby stringent thresholds such as downramping to prevent stranding of fish larvae are enforced.

Downramping thresholds are currently the target measure for sustainable river management projects in Austria. For example, the SuREmMa project (Sustainable River Management — energy and environmental evaluation of possible surge absorbing measures) developed an evaluation methodology for an integrative assessment of the ecological benefits of hydropeaking mitigation measures and their consequences for the use of hydropower. The potential impacts on the electricity system (flexible energy production), their macroeconomic consequences, as well as their impacts on business economy level can be described.

To date, hardly any hydropeaking mitigation projects have been implemented. As the complexity of the matter will require a detailed case-by-case evaluation, the mitigation framework we have presented provides an excellent guideline on how to move forward from an ecological perspective. The implementation of seasonal restriction guidelines will not only counter hydropeaking-induced population bottlenecks but has the potential to mitigate reductions in energy yield compared to year-round hydrological limits. Nevertheless, further research is necessary to evaluate the ecological effectiveness of the proposed concept and to quantify exact thresholds while minimizing flexible energy yield reductions.

The full review article can be found here, open access: