I have said it before and no doubt I will say it again. ​“Build it, and they will come”. And they appear to have come quite rapidly and liked what they found… I’m talking about the wild trout of the River Nidd venturing into Dauber Gill.

Sometimes it takes a little while for our WTT advice to be taken up, and that could be for a whole host of reasons. It may take a certain catalyst. Nidderdale Angling Club was the recipient of an advisory visit from WTT in 2011. That report resurfaced in 2018 and prompted several members of the committee to contact me to prioritise plans and initiate some action. Like many clubs, historic decisions to stock the river were being scrutinised, and votes were cast to divert money previously spent on adding fish, into habitat rehabilitation instead to nurture the wild fish populations more sustainably. 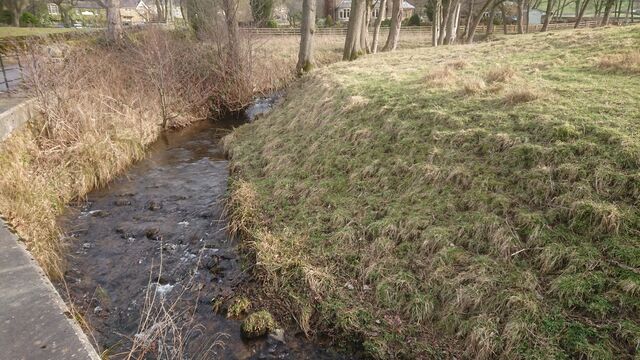 Dauber Gill - artificially steepened through straightening, walled, bunded....ripe for a bit of TLC

Dauber Gill, a small tributary identified in the original report, was chosen to be the focus of a trial. Like many other small tributaries in the Dales, it was realigned to make coherent parcels of land for improved pasture and to provide an offtake for a mill. As a consequence, it has been shackled into a perched (ie higher on the valley side than it should be) and walled channel subsequently further diverted around a railway station (to supply stone for the building of Gouthwaite dam) and then a small sewage treatment plant. The result – a steeper, straighter, uniform channel with considerable erosive force constrained between the walls during spate flow. Thankfully, there is growth of alder within and at the toe of the walling to provide some low cover and shade. 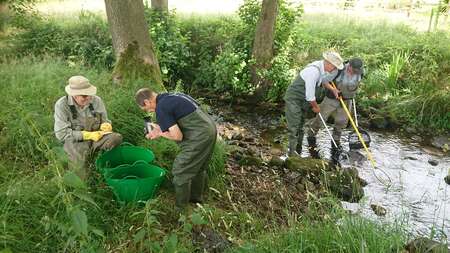 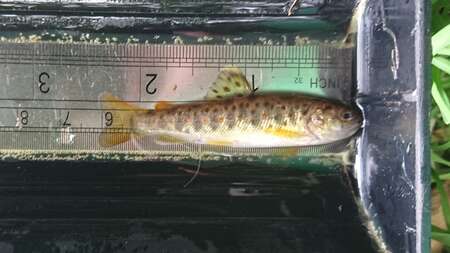 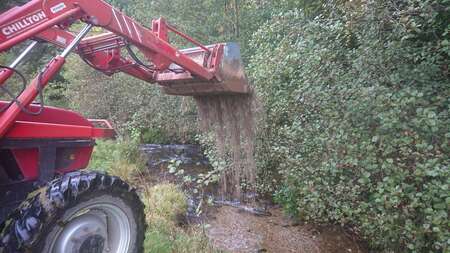 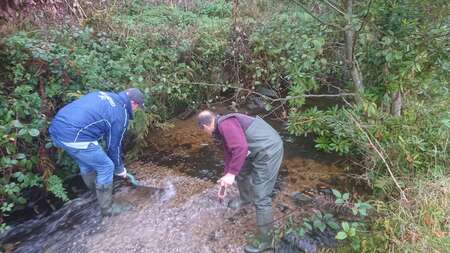 Such artificial in-channel characteristics, however, are not conducive to retaining finer substrate like gravel for trout spawning or invertebrate habitat, or indeed leaf litter which should be a vital resource in these upland streams. With members of the club, I electrofished the beck and found a reasonably balanced population structure (ie most young-of-year, lower numbers of 1+ parr, and a handful of 2+ fish), but fewer than might be expected hinting at a population bottleneck at spawning habitat. The award of a Fishery Improvement Programme grant from the Environment Agency and the support of their Geomorphology team, plus some extra match funding from the local branch of Salmon & Trout Conservation UK began the building of momentum. With graft from the ever-willing volunteer team at Yorkshire Dales Rivers Trust plus some keen members of the club, we set about introducing ~30 woody deflectors to take the sting out of the gradient and to retain 25 tonnes of ~20 mm gravel that we added. That was ahead of the spawning season in 2019.

Storm Dennis certainly tested the integrity of our works in February 2020. It tested the residents of Pateley Bridge downstream of Dauber Gill as it tested the flood defences there too. Another ​‘highest ever’ gauge record fell, but the woody material remained, and more importantly, so did some of the gravel. Of course, a considerable amount of gravel was redistributed and made its way down into the Nidd but I can live with that (see later). 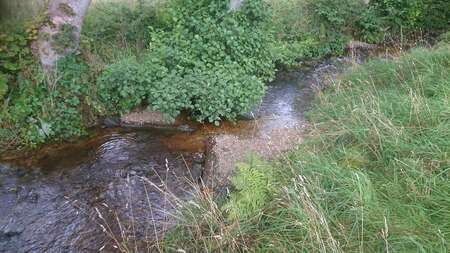 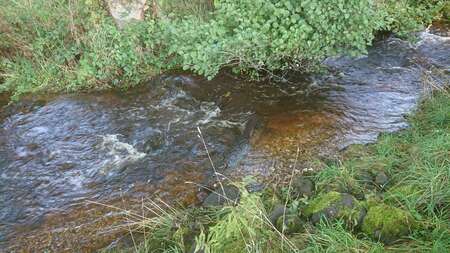 What of the trout? To be honest, I thought it would quite literally be ​‘a washout’ but the survey results speak for themselves. Numbers of trout were up, especially in the young-of-year category (~60 mm) by ~80%, and ever-so-slightly higher in 1+ and 2+ year classes too. 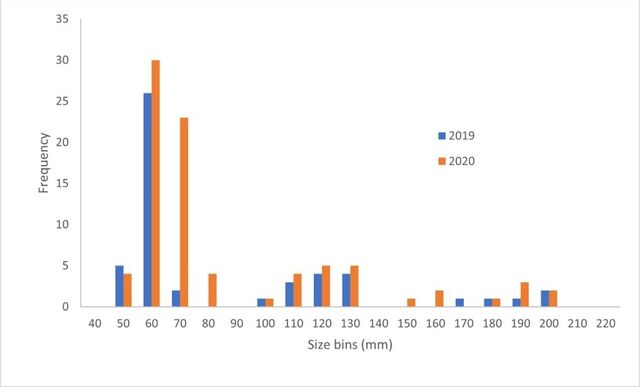 Ever cautious, when I reported back to the club, I said we needed to look at data from other becks across the region as well to see if this was a general trend, just a good year for trout spawning (despite Dennis). The figure below compares survey data from six local becks, four of which exhibited a decrease in young-of-year trout. Not a good spawning year across the board, apparently, echoing my thoughts of Lost Youth, here on the blog last year. Dauber Gill stands out because of such a marked positive shift and we can be more confident our works were responsible. 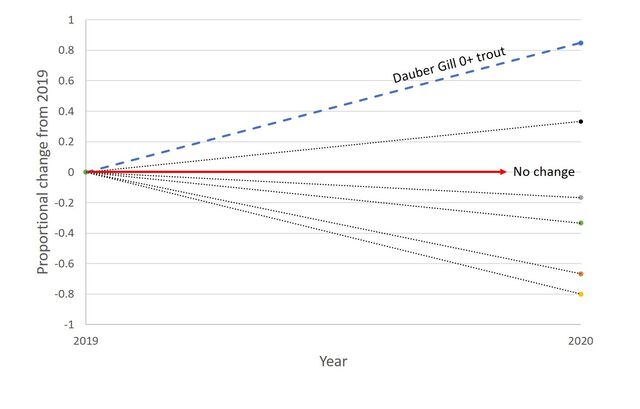 So… we’ve added more gravel! In fact, Dauber Gill has been subsumed into TROUT (Tackling Resilience On Underperforming Tributaries), my Yorkshire Water funded project, and we can thus extend the trial and monitoring for the next 5 years. I mentioned earlier that we’d lost ~60% (guestimate) of the gravel swept into the mainstem Nidd. However, being immediately downstream of Gouthwaite reservoir, the Nidd there has been starved of finer gravel for the past 100 years, so our ​‘contribution’ can only be doing good somewhere. 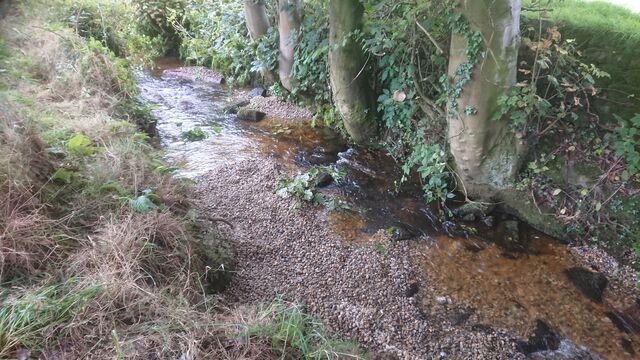 More gravel.... dumped in a few key spots to let the beck distribute it

In terms of project development, the broad-brush ideas from the original AV were in place for ~7 years, they were refined, and firm plans made within 4 months, and funding secured 2 months later. Practical work and surveying accounted for about 6 days in total, and within a year (while we waited for the trout to do their thing….) we could demonstrate a positive outcome. I’m not saying it always falls into place like this, but WTT Conservation Officers are always open to revisit and review previous advice, perhaps in light of changing views or new funding opportunities.

Thanks to the committee of Nidderdale AC for supporting the trial, and I should also give a shout to Simon Evans of the Wye & Usk Foundation for helpful discussion and inspiration from their project, Gravelling the Élan. 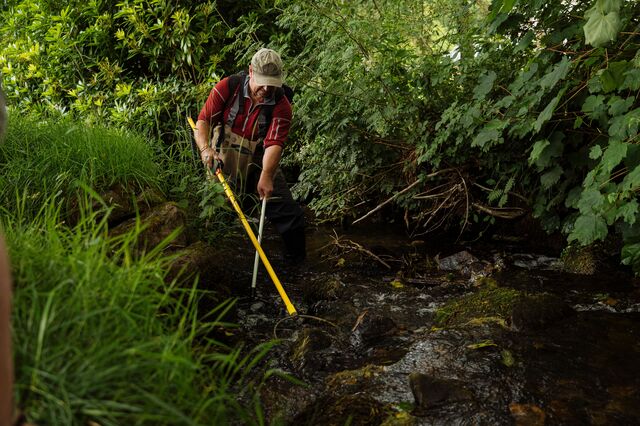 Shout out to WTT chum, Duncan Philpott, for some fabulous pics of the electrofishing in action