There are few more captivating sights than a river reach swathed in water crowfoot flowers, for what delights might be hidden beneath? William Barnes (1801 – 1886) was certainly inspired:

O small-feac’d flow’r that now dost bloom,
To stud wi’ white the shallow Frome,
An’ leäve the clote to spread his flow’r
On darksome pools o’ stwoneless Stour,
When sof’ly-rizèn airs do cool
The water in the sheenèn pool,
Thy beds o’ snow white buds do gleam
So feäir upon the sky-blue stream,
As whitest clouds, a‑hangèn high
Avore the blueness of the sky

This humble member of the buttercup family is considered by ecologists as an autogenic engineer: it can change the surrounding environment via its own physical structure. While many people have tried to study where and why water crowfoot grows, especially in relation to nutrients, few have considered how the plant influences the assemblages of organisms around it. Cue Jessica Marsh’s PhD study….

I am working with Queen Mary, University of London’s River Communities Group and Game & Wildlife Conservation Trust’s Fisheries team to better understand the role of water crowfoot (Ranunculus spp) in southern chalk stream ecosystems. My PhD project will focus on studying the relationships between water crowfoot and the other plants, invertebrate and salmonid communities in chalk streams. Data will be collected from in-river experiments in the River Frome, Dorset to understand how the presence of water crowfoot drives the variability of other flora and fauna. 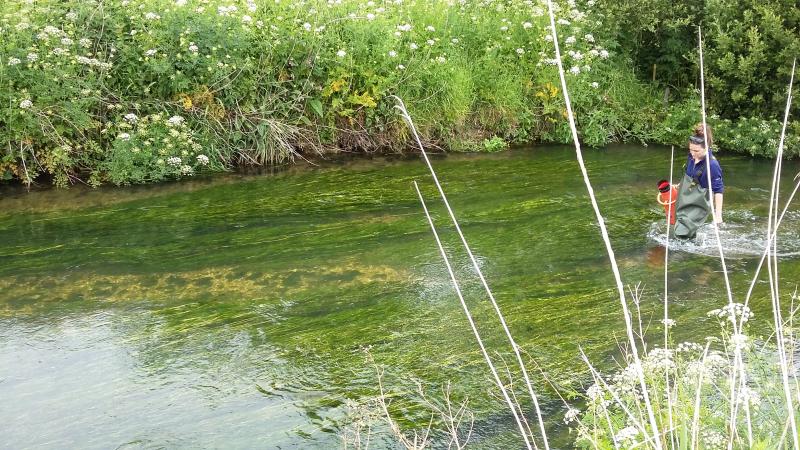 Wading through high water crowfoot cover on the north stream of the River Frome, Dorset

So, why chalk streams and water crowfoot? Well, unique in the stability of their thermal, chemical and physical conditions, lowland chalk stream habitats are of both national and international importance. Chalk streams sustain a high diversity of flora and fauna including species of conservation concern such as water vole, European eel, and white-clawed crayfish. They also support the important salmonid game fish species, Atlantic salmon and brown trout.

The high biodiversity supported by chalk streams is thought to be due to the presence of water crowfoot family. These macrophytes are the dominant in-river plant species throughout chalk stream catchments and are described as pioneer species for their ability to colonise a variety of habitats.

The presence of water crowfoot subsequently creates habitats for other flora and fauna. The plant greatly reduces water velocity within and immediately down-stream of the plant stands, whilst increasing velocity elsewhere by directing water around its cover, thereby altering flow dynamics within the river. The reduction in flow results in an increase of fine sediments being deposited downstream of the plant structure. This encourages growth of other macrophyte species, such as watercress and starworts, that may otherwise be unable to establish themselves due to a lack of organic material or high flow rates. Conversely, increased flow elsewhere keeps gravels free from fine silts. 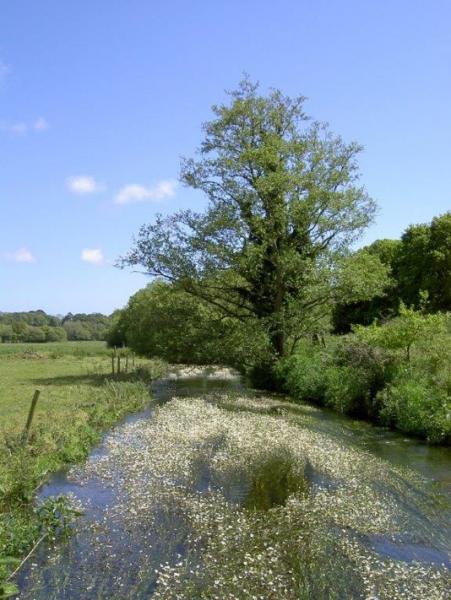 This results in the creation of more complex habitats within the river which, in turn, is linked to the abundant and diverse invertebrate communities that are present in chalk streams by providing diverse food sources and refugia. For example, the submersed parts of macrophytes provide a large surface area for suspension-feeding invertebrates, such as black fly larvae and certain caddis fly larvae, to attach to and feed on organic particles. The mosaic of macrophyte species provides suitable habitat for many different insects during their larval stage, such as damselflies and dragonflies.

Whilst the importance of water crowfoot in driving diversity in chalk stream ecosystems is acknowledged, existing studies on this family are often limited in duration and physical scale and most previous studies have only encompassed single components such as macrophytes, invertebrates or fish, rather than the whole stream ecosystem.

One aim of my project is to establish patterns in the number of juvenile salmon and brown trout, and diversity and density of invertebrate species in areas with varying amounts of water crowfoot. The first of three years of data on macrophyte cover, substrate structure, and invertebrate and fish communities was collected from sites spread throughout the Frome catchment in 2015. The data were collected during the GWCT Fisheries Team’s annual parr-tagging event, where 10,000 juvenile fish are caught, tagged and released, providing critical population data. 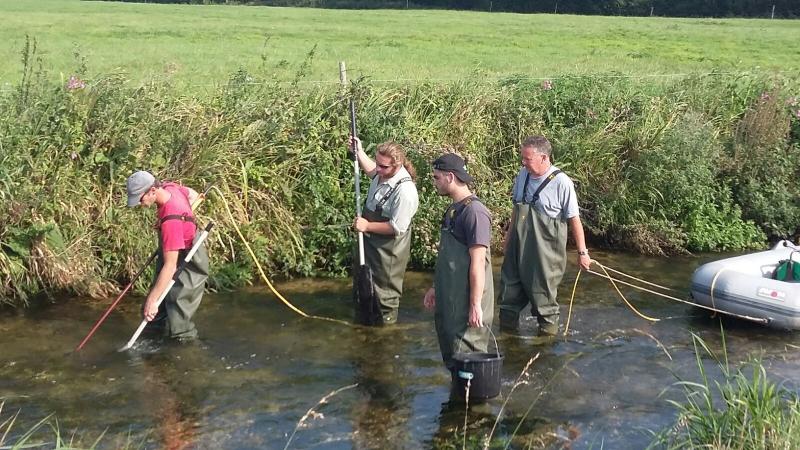 Preliminary results of this initial data collection show a significant, positive association between increasing cover of water crowfoot and an increase in juvenile salmon density, as well as an increase in cover of other macrophyte species. The findings suggest that an increase in water crowfoot cover, to a certain extent, is beneficial to other chalk stream ecosystem components. The next stage of the research will be to explore these correlative relationships through two-year long manipulation experiments. These in-stream studies aim to elucidate the mechanisms behind the patterns discovered by altering existing water crowfoot assemblages and monitoring the effects on juvenile salmon and brown trout densities, invertebrate communities, other macrophyte species, and the interaction between all of these groups. 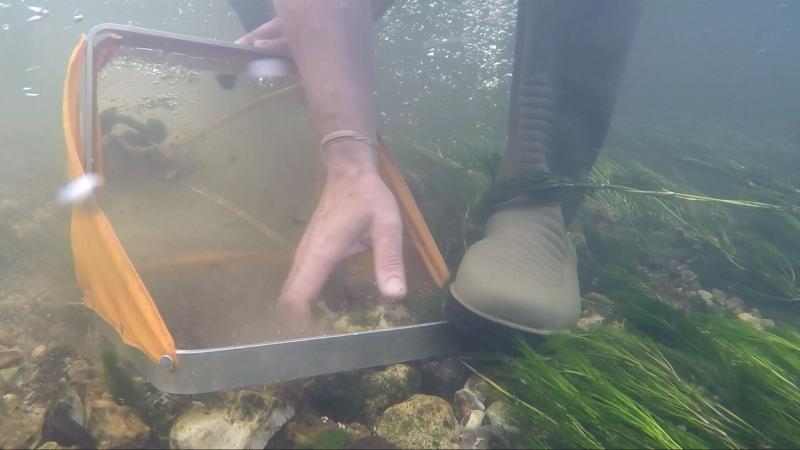 Collecting an invertebrate sample with a Surber net — an underwater quadrat!

Gaining an understanding of such relationships is essential in order to develop effective river management strategies and to direct successful conservation of chalk stream ecosystems.

Please feel free to contact me if you have any questions, or would like further information on my work