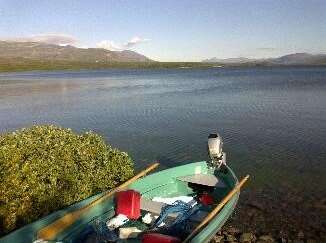 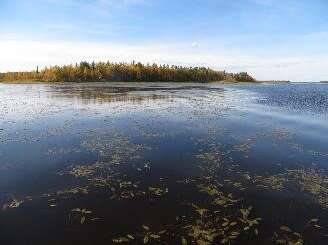 Crystal-clear Lake Galggo (left) and murky Lake Vaatto (right) are both situated above the Arctic Circle but have vastly different water quality and contain different species. Climate change and intensification of land-use are causing fundamental shifts in the ecology of northern lakes with potentially dire consequences for the species they contain and the human populations which depend on them

Having just included an article in my Science Spot for the WTT member annual journal, Salmo, on how climate change is leading to the ​‘browning’ of waters, it’s interesting to see a new paper emerge from a couple of my chums Brian Hayden & Chris Harrod on a similar topic. Although commonly considered a problem for the future, it is becoming increasingly clear that climate change is already having a profound impact on northern lakes, the species they contain, and the humans that rely on them for food and fun. This new research, published in the journal Ecology Letters, sheds light on the way climate change and human activities are reshaping subarctic lakes.

Dr Brian Hayden is a Fellow of the Canadian Rivers Institute in the Biology Department at the University of New Brunswick and lead author of the study. ​“Climate change is already a reality in the northernmost regions of the earth,” he says. ​“Traditional livelihoods, such as fishing and reindeer herding are increasingly replaced with intensive forestry, mining and agriculture. However, these regions are so remote that we know relatively little about how these changes are affecting local wildlife and the human populations which depend on it. This study is one of the first to quantify how the food webs in subarctic lakes respond to this new environment.”

The multinational team of researchers studied 30 different lakes situated above the Arctic Circle in Europe. This region, where climate change is acting most rapidly, is already experiencing shorter winters and longer, warmer summers. The team examined the diet of fish and invertebrates with chemical tracers called stable isotopes which reveal the type of primary producers (e.g. plants and microscopic algae) that feed these animals

Their study spanned a climate gradient of 3°C, mimicking the type of changes predicted for this region in the next 100 years. ​“Lakes in these cold, northern environments typically have crystal clear, drinkable waters and food webs fuelled by tiny algae growing on the lake bed. In warmer lakes, the extra heat and nutrients promote the growth of phytoplankton, microscopic plants within the water column. This phytoplankton provides an additional source of food to invertebrates and fish, but also lead to a reduction in water clarity, resulting in what we refer to as murky lakes,” explains Dr. Hayden.

The study found that while the diet of invertebrates and fishes was very similar among all 30 lakes, the animals became almost entirely reliant on resources produced by this new plankton-based food chain in warmer lakes. Even fish feeding on insects living in the mud in the lake bed ultimately relied on phytoplankton. ​“We were amazed by the complete change we saw in the food webs, these lakes situated north of the Arctic circle are functioning as though they are in Central Europe,” says Hayden.

The study builds on previous work by the team, which showed that warmer lakes contain up to 100 times as many fish as the cold lakes and that a change in temperature by 3 degrees Celsius is sufficient to change the majority of cold, clear northern lakes to systems more typical of lakes found well below the Arctic Circle. As these lakes change, the species currently found in them will lose-out to species which are better adapted to warmer conditions.

“We have already seen warm-water species, such as perch, roach and ruffe taking over habitats naturally occupied by highly-prized food fishes, such as whitefish, brown trout and Arctic charr,” says Professor Kimmo Kahilainen from Inland Norway University of Applied Sciences who co-ordinated the research over a period of 10-years. ​“Northern lakes play a vital role for local communities, but are particularly vulnerable to changes in the environment. We are seeing strong evidence that these types of lakes which support nutritionally and traditionally important species of fish are disappearing before our eyes.”

This work is part of a long-term collaboration between researchers in Norway, Finland, Canada and Chile to understand how high latitude ecosystems are responding to climate change.

“We are seeing historically unprecedented conditions in the subarctic, long warm summers and shorter periods of winter ice cover are increasing the growing season in lakes. In combination with increased nutrient availability due to forestry, mining and agriculture, this presents a perfect storm of environmental change. Reversing these trends is extremely challenging, however by working together, sharing ideas and information, we hope to understand how human activity is rapidly reshaping northern ecosystems and find ways to mitigate these changes” says Hayden.

If you’d like more information on the study, feel free to drop Brian a line on: