Asa White gets to call wading around in the Bourne Rivulet work! Our research interests in chalk streams have some parallels. While I am curious as to how a colourless, odourless gas (methane) contributes to the fuelling of their food webs, Asa is trying to understand how an equally invisible chemical is affecting invertebrate and fish life. Here, he outlines his research plans and offers up the experience of electric fishing — read on!

Watercress is native to the chalk streams of southern England, and has been harvested for millennia. In the early 19th century, the advent of the railway made commercial production viable for the first time. A growing London market supplied by trains (the famous ​‘Watercress Line’ being one) led to an explosion in the number of watercress farms throughout the south of England. Historically, watercress was grown in gravel beds irrigated by water diverted from chalk streams, but hygiene concerns now oblige growers to irrigate their beds using fresh water abstracted from boreholes. In both instances, the water used to irrigate the beds is discharged into adjacent chalk streams.

Today, much watercress farming is highly mechanised, with modern practices allowing for year-round production. A number of large-scale modern watercress farms now house washing and packing facilities for the watercress farmed onsite in addition to imported salad leaves. Abstracted water is used to rinse the crop prior to packing, with the spent water returned to the chalk stream. Typically it is first filtered through screens and channelled into settlement ponds or through watercress beds to reduce sediment load before discharge. While sediment is often effectively treated, there is growing concern that the mechanical abrasion of watercress and other salad leaves during the washing process — and to a lesser extent during the harvesting of watercress — induces the release of phenethyl isothiocyanate (PEITC) into the receiving water course.

Watercress possesses the glucosinolate-myronase system; regarded as the classic defence against herbivorous organisms. Damage to watercress tissue initiates the synthesis of PEITC, the compound which gives watercress its hot peppery taste. While pleasing to many human consumers, myself included, PEITC has unsurprisingly been shown to be toxic to a number of aquatic and terrestrial invertebrates. A number of surveys by the Environment Agency have demonstrated altered invertebrate communities downstream of watercress farm outflows. Some expected taxa were found to be absent, along with a significant depletion in a staple year-round component of salmonid diets, Gammarus shrimp. While the impact on invertebrates has been documented, until now the effect of watercress farming on fish populations hasn’t received attention. 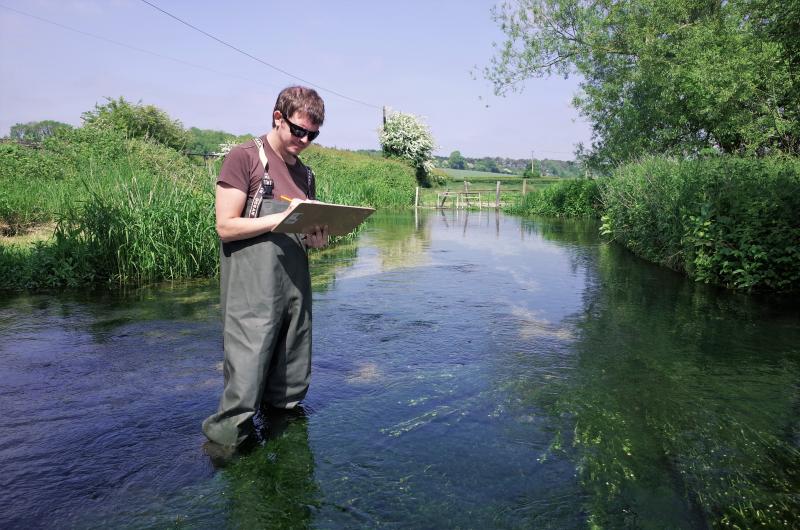 My research at the University of Brighton comprises three main elements. Firstly, using electric fishing surveys around three watercress farms over two years, I am ascertaining whether discharges are having a population-level impact on fish communities. Secondly, at the same sites, I am surveying habitat suitability for salmonids in terms of the physical habitat and prey species abundances. Lastly, I am running laboratory ecotoxicology experiments to study the effects of PEITC on fish. The aim of the research is understand what effect, if any, watercress farming is having on fish populations. Should a negative impact be uncovered, then mitigation strategies to lessen the impacts could be developed to ensure that fish populations in chalk stream headwaters flourish.

It is well-known that early life stages of fish are particularly sensitive to pollutants. With salmonids and bullhead spawning in the upper reaches of chalk streams where watercress farming typically occurs, there is a very real potential for developing embryos to be exposed to PEITC. To assess the impact of PEITC exposure, I am running a series of ecotoxicology experiments on fish eggs in the laboratory. Brown trout are the main focus due to their high value within chalk stream ecosystems, but I have plans to experiment with grayling and at least one cyprinid species. Last October I exposed brown trout eggs to a range of PEITC concentrations throughout embryonic development. I am currently repeating the experiments using photoperiod eggs obtained this March that I am expecting to hatch around the end of April. If the results from the first experiment are accurately replicated, then I have a very strong dataset for publication. Watch this space! 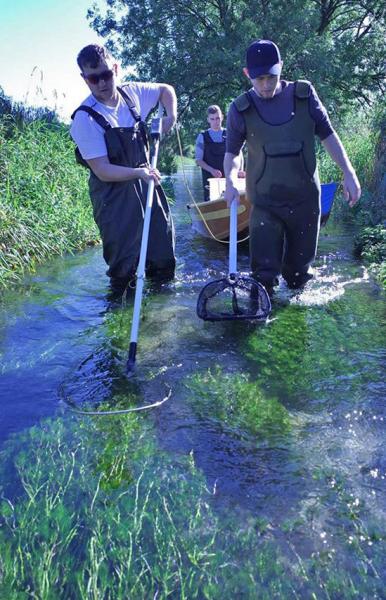 My study sites are located around three watercress farms and include sites immediately upstream and downstream of discharges at each farm for direct comparison. To investigate the downstream extent of perturbations caused by discharges, each farm has two further sites, one approximately 500m and another between 1km and 1.5km downstream. One of the farms is on The Bourne Rivulet, a tributary of The Test in Hampshire, and is owned by VItacress Salads Ltd, a company which has generously part-funded the research through the Vitacress Conservation Trust. This reach boasts a very well-regarded wild trout fishery made famous by Harry Plunket Greene in his 1924 book on fly fishing Where the Bright Waters Meet. A further two farms in Dorset complete the sites; one on the River Frome and the other on the River Crane, a tributary of the River Stour. Both of these farms are located on SSSI perennial chalk river headwaters. So far I have surveyed these sites during spring and autumn in 2016, and I will return to survey them again this year.

The electric fishing at each site is carried out over 100m runs using a standard three run depletion method. The catch is identified to species level and the standard length and weight of each individual recorded before being returned to the river unharmed. It is important to tease out whether any differences in trout numbers seen downstream of watercress farm discharges are related to the discharge or merely a function of the prevailing conditions such as substrate type, hydrology, plant cover, geographic location etc. I’m addressing this by using detailed habitat surveys fed into HABSCORE software. HABSCORE outputs an estimate of expected salmonid abundances for the given physical habitat, which can then be compared to the actual abundances found during electric fishing.

Using standard three minute kick and sweep sampling, the invertebrate fauna is being surveyed to see if the abundance of suitable prey species for fish is present. In addition, I am using biotic indices to assess whether the invertebrate assemblages indicate that the sites are impacted by pollution. Should fish populations be found to be altered below watercress farm discharges, we can then begin to ask ​‘are differences in expected fish populations driven by changes in prey availability, lack of suitable habitat or a direct effect of PEITC in discharge water – or a combination of these factors?’ 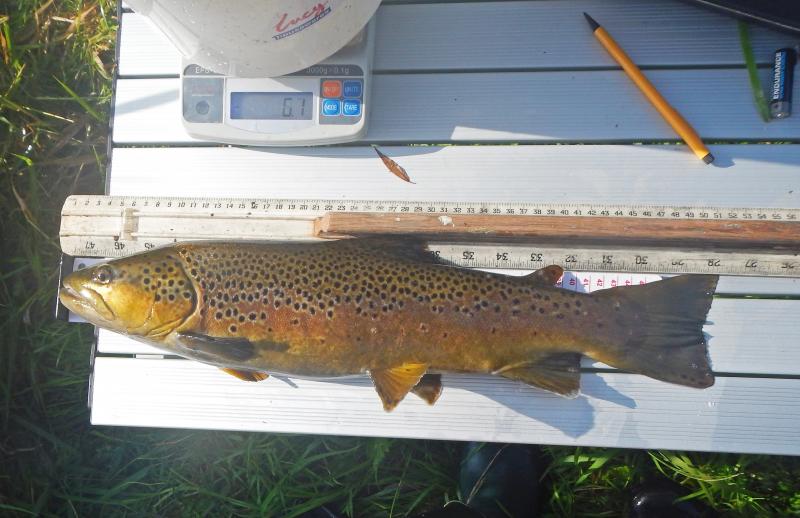 So far I have enjoyed data collection in the field for two seasons, and have been very fortunate to have been blessed with fine weather. The main catch from these chalk streams is naturally brown trout and bullhead with the occasional eel. However, the downstream site on the Frome has proved to hold a diverse range of species. I pulled out a magnificent grayling on my last visit, along with pike, stone loach, minnow, perch and brook lamprey. One of the joys of electric fishing is one never really knows what one is going to find, and if it is in the run, it will come to you! My survey work would be impossible without the help of volunteers. Students from the Aquaculture and Fisheries department at Sparsholt College inevitably turn out to be real gems, bringing with them lots of experience. However, I always train any volunteer who hasn’t had electric fishing experience and they soon get the hang of it. I’m always on the lookout for volunteers, so if any readers of this blog would like to try their hand at electric fishing and habitat surveying, I would be delighted to hear from you!