Back in March, which seems an absolute age ago now, I wrote a blog about the low-cost baffle solutions to ease fish passage on Bradford Beck. These interventions over several weirs are a part of a wider scheme to improve the environment within and alongside the beck. Bradford Metropolitan District Council, Environment Agency, Friends of Bradford Becks, and WTT are partners on a programme funded by the Water Environment Improvement Fund from Defra and an EU BEGIN (Blue Green Infrastructure through Social Innovation) scheme.

I had begun the work (with help from Aire Rivers Trust staff) opportunistically in January during low water. Then February arrived with a bang and we all know how much water flowed under the bridge during that month, generating the highest-ever recorded peak at the gauging weir, one of those troublesome barriers! It carried and deposited various trees, a car, lots of scaffolding, many tonnes of building rubble, and all sorts of unmentionables from numerous CSOs. I’m pleased and just a little bit chuffed to say that all the baffles survived the onslaught. 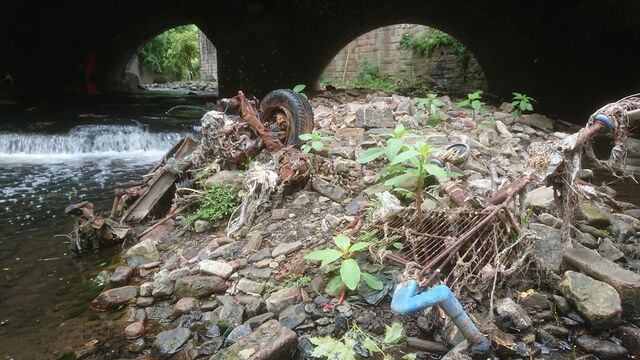 Yes, that is a car, maybe a Fiat Panda, that has trundled over two of my fish passage easements to be deposited below Leeds Rd Bridge

A fish survey was planned to coincide with World Fish Migration Day but Covid19 scuppered that initial idea. However, we have since managed to return to put the finishing touches onto one pass and run the electrofishing gear through the system as a first ​‘look-see’ since the easements were installed. We were effectively starting from zero as there was a major pollution event on the beck in 2019 which resulted in a fish kill. 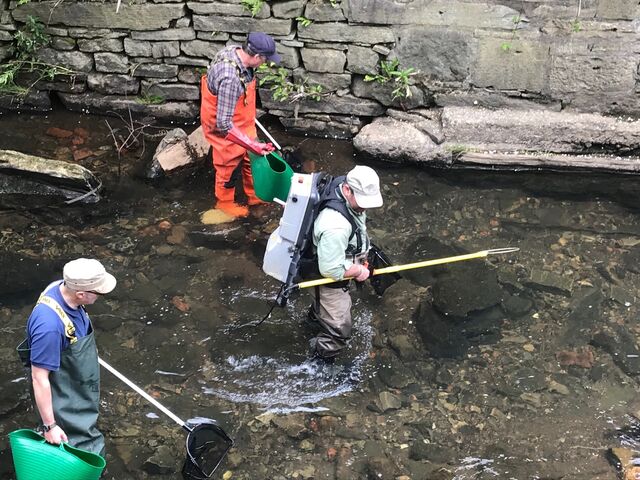 Social distancing is easy with a 2m electric wand

We designed our survey to encompass four reaches to assess fish community and population structure downstream and upstream of three of the barriers; the lower two now having our fish easements in place (Leeds Rd Bridge and Station weirs) and the uppermost, an EA gauging weir, still to be modified. The results were encouraging! 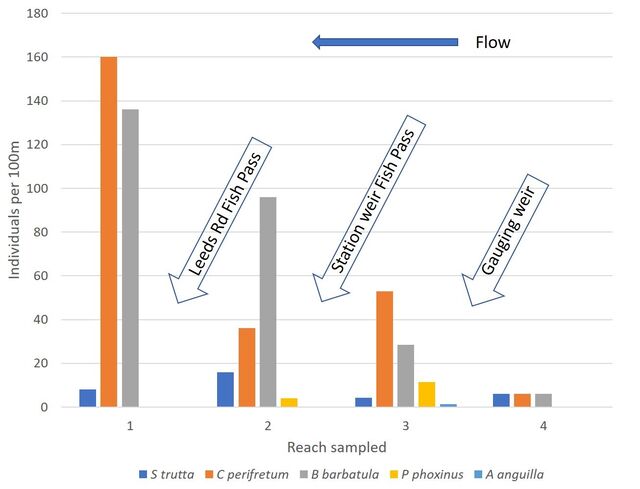 Five species were recorded which was a great start: brown trout, bullhead, stone loach, minnow and a single European eel. A potential confounding factor to us assessing the efficacy of the fish easements was whether recolonisation could occur from populations upstream, above the problem spots in Bradford, rather than from the mainstem Aire downstream. If that were the case, then we would expect a similar distribution across the four reaches or a bias in fish numbers to the upper reaches. Quite the opposite was found, suggesting that recolonisation was occurring from downstream, and that all five species could make it across the weirs modified for fish passage.

A gradual decline in overall numbers as we progressed upstream could indicate a sequential effect of each barrier preventing a proportion of the fish from recolonising. However, it could also simply be a function of the relatively short period of time since the fish kill last year and that populations haven’t stabilised yet. Of course, those two scenarios are not mutually exclusive. Time will tell! The gauging weir, the only barrier without a fish passage easement (yet – it’s in the pipeline) appeared to have a marked effect on the fish density with much lower numbers of the small species that were dominant elsewhere. 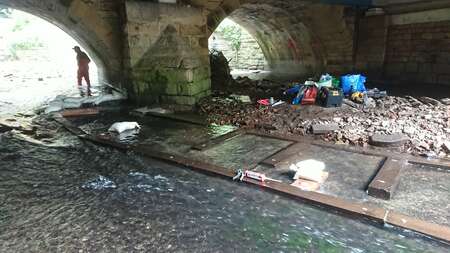 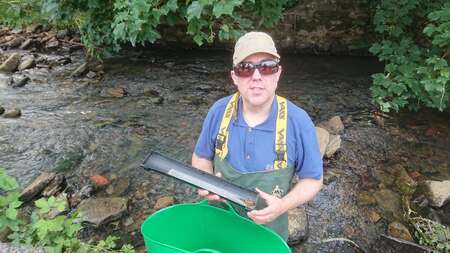 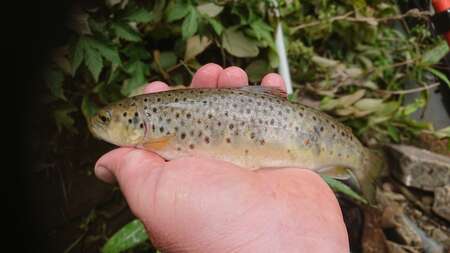 Of all the species recorded, brown trout exhibited the most even distribution which might be expected given their greater swimming (and leaping) ability. Many of the minnow and stone loach were gravid, and a handful of young-of-year bullhead were caught, so this bodes well for instream production and sustainable populations. There did not appear to be a discriminatory effect of the barriers on individual fish size as there were no significant differences between reaches in the size distributions of stone loach and bullhead.

Early days yet – it will be interesting to see if / how these patterns may change over time.