Posted on September 12, 2011
Two of the new attendees at our "urban conclave" in February this year invited me back to their own urban river recently. The purpose of the visit was two-fold; first of all to do some "mayfly in the classroom" training and also to do a revisit to the site that I had provided a habitat report on last winter. As well as exploring opportunities for access to spawning tributaries, my hosts also kindly allowed me to fish their privately owned section. Sadly this piece of river suffers serious pollution spills every few years. These have included incidents that have wiped out all fish - including thousands of eels. In fact, the only fish to survive one such incident in 2009 were the handful of eels that managed to CLIMB OUT ONTO THE RIVERBANK and ball up in tree roots. Therefore, it was more an act of defiance to make our way up the river with fully rigged fly rods casting into numerous likely-looking spots in the vain hope of proving the water chemistry data wrong. And let's be clear here; there was absolutely no shortage of fantastic looking holding water in the quarter mile or so that we fished. It is a classic upland trout stream that has sadly been allowed to comfortably wear its label of degraded/polluted/lifeless for far too many generations now. My hosts, though, have the ambition that within the next 5 to 10 years there can be progress made to ensure the presence of wild, self-sustaining trout populations here - and I applaud them for it.

It was with a heavy heart, therefore, that I reached the last feature at the upstream boundary - being as we were fishless. Based on the appearance of the habitat, we should have been some 20 fish to the good at that point. The final feature in question was a riffle feeding into a lovely scour pool on the outside of a bend. It even included some great tangled tree root and sedge grass cover. In fact, it had merited special mention during my original habitat visit in the depths of last winter. And so when the leader's progress down the pool halted momentarily, I lifted the rod realising that I'd generously made another sacrificial offering of a weighted nymph to the tree root gods. Except that, in this case, the "snag" proved to be quite mobile. Explosively so. Positively livid in fact. What had I connected with? A shout downstream to the others that they might at least witness the rod bending into a fish. As they splashed their way upstream I glimpsed something momentous. Well - two momentous somethings actually. First of all; the fish was very large. Second of all; this large fish had spots on it......
"*$$*ing hell", "don't lose it", "£%*&ing, *%£*" etc. for the ensuing tense minutes.... As you can see below, I did get it into the net and it did pose for a couple of pictures.

But lets be totally straight here - that fish is large because it has somehow avoided the ignominious fate of all its brethren and, consequently, has almost no competition for resources. The operation of human industry in this area have given this fish no chance of survival and every chance of extermination. And yet there it was - probably having dropped downstream from the cleaner reaches upstream (or perhaps finding refuge in a side stream during the various pollution blights it would have endured in the main river during its lifespan). Surely we can do better to make sure that fish like this can thrive here? 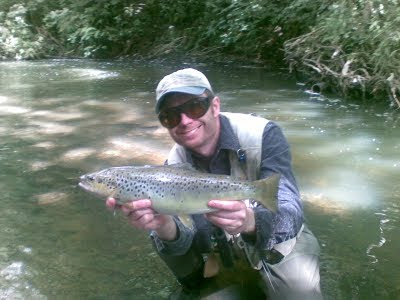 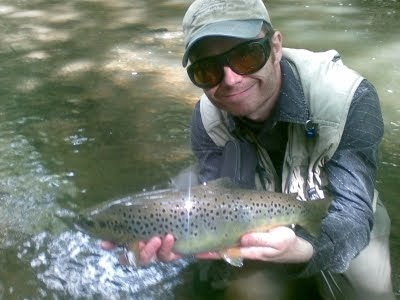