Weirs are a problem for both resident trout and sea trout as they act as barriers for them to migrate upstream to spawn and downstream to go to sea or find new territories as they grow to adult size. Weirs also disrupt the way that sediment would naturally be eroded and deposited in a river, creating pools of sediment above the weir and excessive erosion below. For more on the impacts of weirs, click here.

Projects that re-connect rivers fragmented by weirs and other barriers is a core part of the WTT’s work. Wherever practical, the preferred solution is to remove the weir or make a ​‘notch’ to reduce the height and concentrate flow, rather than install (often expensive) fish passes.

Here are a three of examples of WTT projects that have removed weirs or notched weirs in August and September 2016. One is a small project on the River Meon in Hampshire delivered by Andy Thomas (details below).

The second is a larger project on the Brailsford Brook in Derbyshire managed by Tim Jacklin which removed 5 weirs in under three hours ! For some before and after photos of that project, click here.

The third project involved notching weirs on the Eastburn Beck in Yorkshire. This project was carried out by Jonny Grey of the WTT and Pete Turner of the Environment Agency, with help from volunteers from the Yorkshire Wildlife Trust and Bradford Environmental Action Trust. Click here for the story of that project.

Access for migrating fish has been improved along with 150m of channel on the upper Meon at Riplington. WTT delivered an advisory visit to this site in 2014 and identified an old concrete weir structure that was responsible for both holding up fish migrations and also degrading local habitat.

Last week the invert of the concrete weir was finally removed back to the original bed level. The wings of the weir were retained to act as a flume to ensure that the existing downstream plunge pool doesn’t become completely silted up. In addition to the weir removal, a further six pool & run features were created using a tracked excavator. Pools were deliberately created in the lee of existing hawthorn trees to provide optimum holding habitat for pre and post spawning brown and sea trout.

This project was funded by the Pasco James Fund. This fund is regularly topped up thanks to the 3 Fly Competition held each year at Meon Springs. 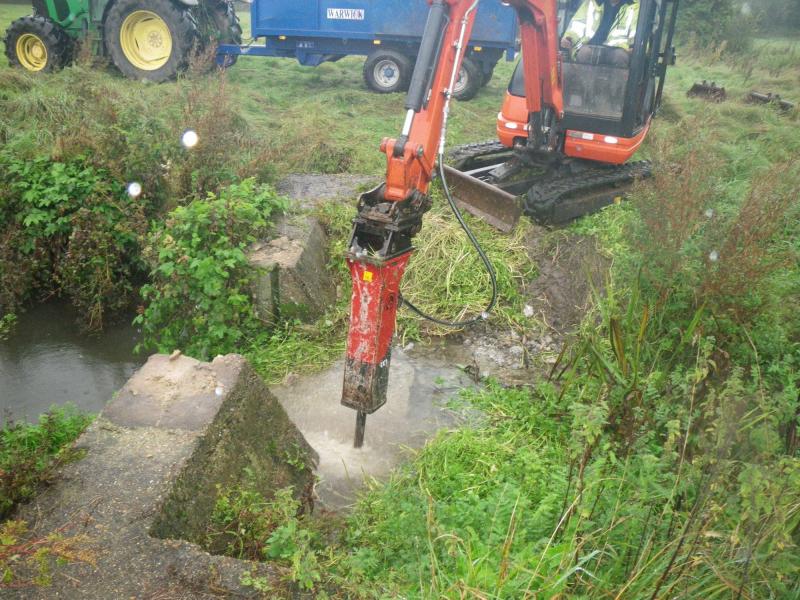