March 2012 saw a WTT team (Tim, Paul and Gareth) heading to the Duchy of Lancaster water on the Pickering Beck. We were there at the request of Tony Walsh and Dave Southall of Pickering Fisheries Association and we also had a 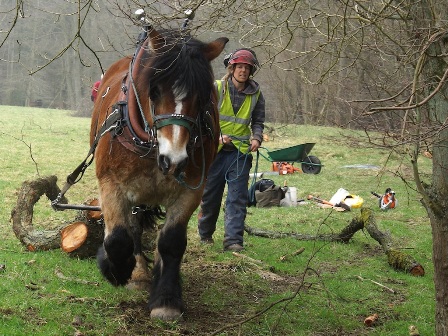 fully-laden camera crew in tow (Dean Hodson and John Pearson of Fish On Productions). The aim was to train local fishing club members in techniques of improving the prospects for both trout and grayling populations in their stretch of water – and to simultaneously use this exercise to produce training videos so that a much wider audience could benefit from the work done over two days. We also had the exciting and unusual prospect of using heavy horses to manœuvre felled timber as, apart from the lowest field, much of the bankside terrain can be very difficult to access with petrol-driven machinery. These works were generously funded by the Environment Agency (North East Fisheries department), The Grayling Society as well as drawing on Wild Trout Trust resources. 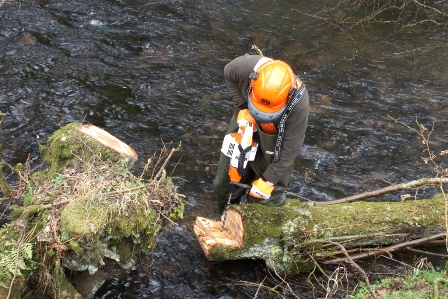 The works within the river channel itself concentrated on augmenting some nice existing juvenile habitat by adding structures that were targeted at two additional life stages of trout and grayling: adult holding habitat and clean, size-sorted spawning gravels. We also made sure to provide some more substantial refuge areas for young fish to escape the worst of the spate flows that often pour down this river – as well as sheltering them from predators.

Another theme that we were keen to impress upon the club members is the importance of how the surrounding land is used – and the effect of such land use on the fish and invertebrate populations of their river. In order for the club to get the best benefit from the labours of installing structures within the channel – they are going to have to bring about a change to the dense coniferous forestry that is 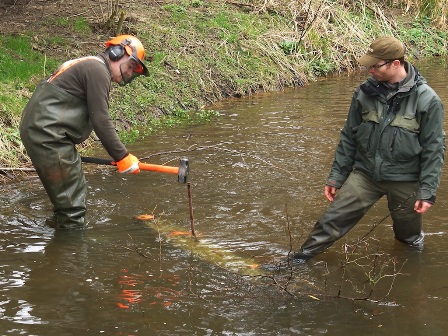 planted right up to the top of the bank for a large proportion of the Duchy water.

I look forward to returning to this section of river in a couple of years’ time with a fly rod in hand, and I hope that we will have won some converts within the fishing club membership by having a really positive impact on grayling and trout population numbers. The combination of reducing fine sediment input and increasing nutritious leaf fall by swapping from coniferous to deciduous forestry adjacent to the river – along with the increased spawning inputs, juvenile fish survival and adult pool habitat will be a great thing to see when it all comes together.