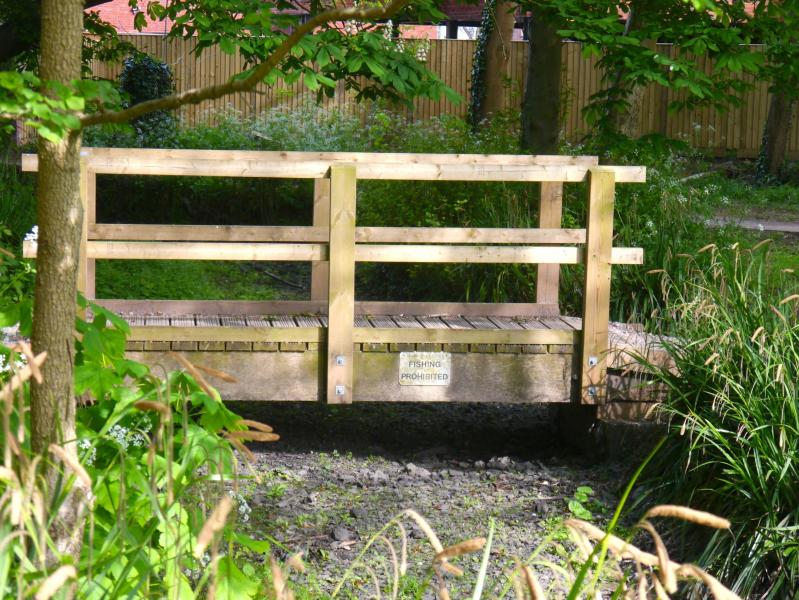 The parlous state of many of our chalkstreams and their aquifers has once again been highlighted by what is currently happening to those in the Chiltern Hills of SE England (and see some of our recent blog posts on relevant science, here).  The Chess at Chesham has been dry for a year (see photo below) and the EA report the lowest October groundwater levels on record for this catchment. Abstraction and relatively low rainfall are crippling the Chess and its neighbouring chalkstreams such as the Colne, Gade, Misbourne and Ver.

There’s more on this truly disturbing story on the website of the River Chess Association. The RCA Chairman and tireless campaigner for these rivers, Paul Jennings, says “In my view, permitted abstraction levels in the light of changed weather patterns are now unsustainable and if we want healthy chalk streams then water companies must be required to find alternative sources of water for their customers”.

If you haven’t read it yet, find Charles Rangeley-Wilson’s emotive piece for WWF, including a portfolio of photos that tell the story better than any words: https://www.wildtrout.org/news/dying-and-drying-chalk-streams

Slideshow from the Conservation Awards

Our photographer, John Sutton of Clearwater Photography took some great photos at the Conservation Awards in October.

He has put together a slide show of a selection of photos. As you can see, it was a very enjoyable evening and the entries to the Awards, and especially, the winners, were truly inspirational.

Barbless flies and the WTT

Barbless flies are now giving their customers an option to receive their flies with minimal packaging, rather than a plastic box. And they will be donating the 50p that they save on the plastic box to the WTT.

A great win for the environment in three ways – barbless flies makes catch and release faster and less damaging to the fish, lots of 50ps will help the WTT deliver more practical improvements to rivers, and less plastic is good for the global environment.

Scan our news pages, keep abreast of the Conservation Officer Twitter feeds, and trawl back through the WTT Blog, and you will unearth much practical work to restore connectivity of river systems. We have a library page outlining some of the prominent issues that obstacles cause to all fish, not just the migratory superstars, sea trout and salmon.

But in an arena where funding for conservation is limited and managers are looking to proritise projects, then it helps to know, for example, where and how many barriers are on a given system, and how severe are the impacts of each. To help address this in Irish rivers, Siobhán Atkinson, a PhD student based in the School of Biology and Environmental Science in University College Dublin (UCD) is conducting research as part of an Environmental Protection Agency-funded project called Reconnect.

She has outlined her project for us as the latest guest researcher on the WTT Blog, and we look forward to updates from her as the work progresses.

CATCH (Community Action to Transform the Cale Habitat) is a group of very effective and enthusiastic volunteers based in Wincanton on the River Cale.

The WTT has supported this group as part of our Trout in the Town Programme, and, with our help, they have applied for £10,000 from the Aviva Community Fund to link their local community to the river.

The money will pay for:

-          A Town Trail to encourage residents and visitors to Wincanton to value and protect their river.

The winners of the WTT / Thames Water Conservation Awards 2017 are: 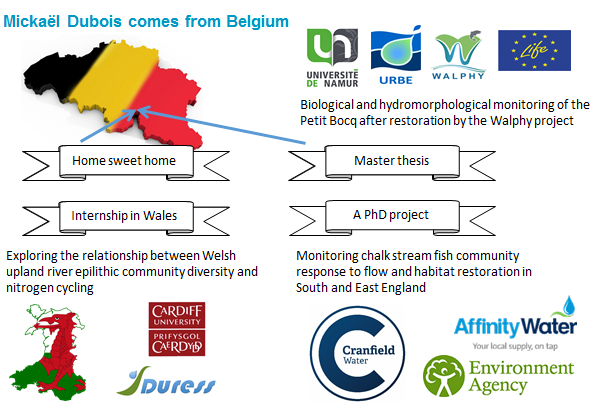 With abstraction pressures on chalkstreams regularly hitting the headlines over the past year, spear-headed often by former WTT President Charles Rangeley-Wilson, we have a new contribution from another young researcher to add to the WTT blog.

His MSc thesis involved the biological and hydromorphological monitoring of the Petit Bocq River after restoration by the LIFE Walphy project. Following an Internship in Wales at Cardiff University on another project related to freshwater ecosystems (epilithic community diversity and the nitrogen cycling) and fully embracing British culture led him to his current position at Cranfield. This is all rather neatly summarised below! 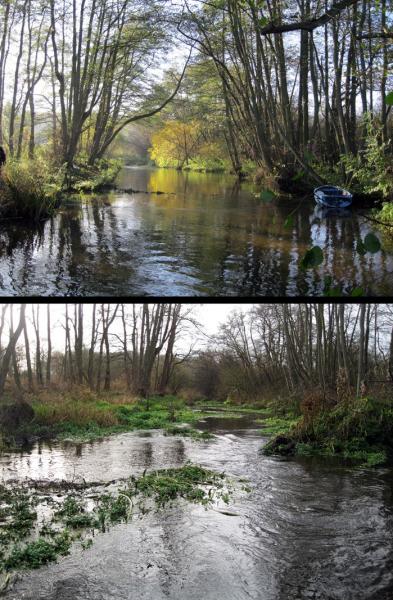 Around the globe, the reintroduction of large woody debris / material is a common tool for river restoration schemes in an effort to promote biodiversity and enhance natural flood protection. Several reviews of the scientific literature have concluded that it is generally considered as good practice, yet results do vary (e.g. it is often difficult to demonstrate an increase in fish which is what most anglers want), and it is difficult to compare across studies because of the various ways restorations have been carried out. A new study by Murray Thompson and colleagues provides valuable new insights, critically using a ‘multiple before-after control-impact’ study design to allow such comparisons across different rivers.

They carried out biological, physical and chemical surveys of five UK rivers in the months before and after the addition of large woody debris: on the Bure, Loddon, Lyde, Test and Wensum. Three stretches were sampled on each river: a ‘restored’ stretch where a large willow or alder tree was felled and tethered to the river bed; a ‘control’ stretch which resembled the ‘restored’ stretch before tree-felling; and a ‘target’ stretch which contained a substantial tree which had fallen 3 to 5 years earlier.

Murray says: "Restoration of woody debris has been used to enhance in-river habitat throughout the world for over a century in tens of thousands of projects. Woody debris is increasingly used to reinstate natural processes, restore biodiversity and thus recover degraded river ecosystems. Yet, there is a striking lack of causal evidence to support this approach.

In the first experiment of its kind conducted across multiple rivers, we set out to test if, by felling trees in-river, biodiversity and food web metrics were restored relative to 'control' (i.e. unrestored) and ‘target’ conditions where naturally fallen trees were already in place. We were able to demonstrate causal links between habitat restoration, biodiversity restoration and food-web responses. For instance, elevated species richness in restored areas relative to controls was primarily driven by the repopulation of rare invertebrate taxa which also had many potential predators.

UPDATE: To see a report and photos of the day, see Paul Gaskell's blog post here

Join the fun and see the habitat improvement works on the River Witham in Wyndham Park, Grantham, Lincs on Sunday 24 September. And whilst you are there, say 'hello' to WTT Conservation Officer Tim Jacklin. 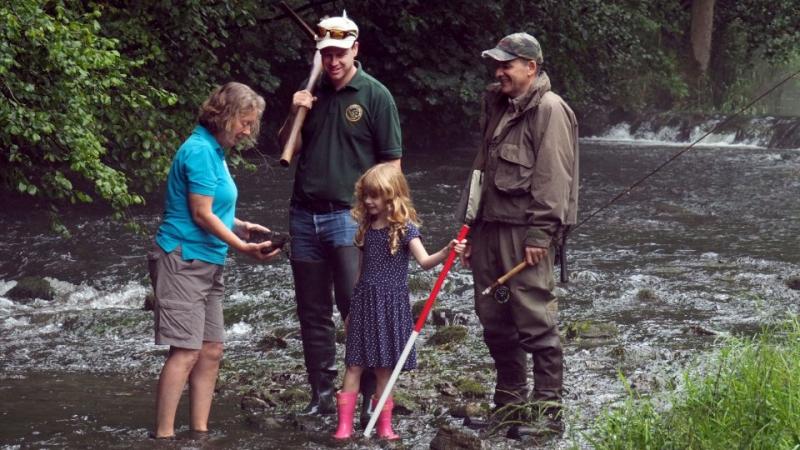 WTT Conservation Officer Tim Jacklin is working on a project to ‘let the Dove flow’ by breaching some of the 100 weirs that were created in the early 20th Century. 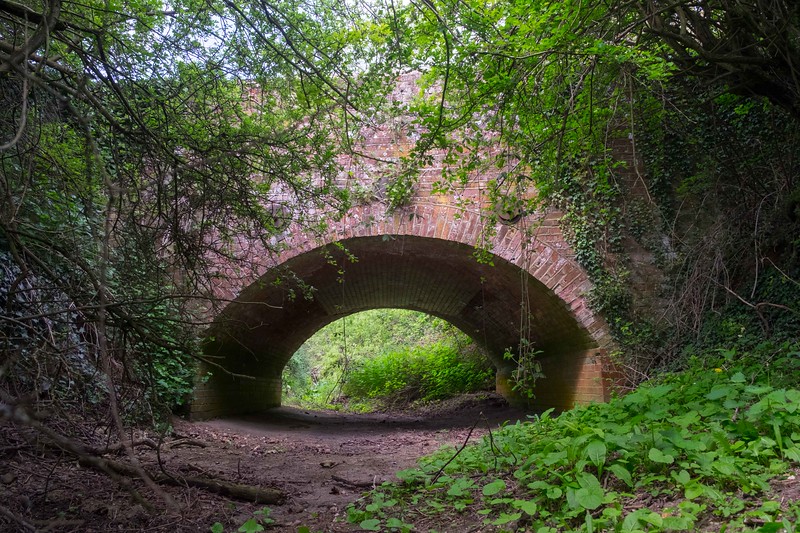 Wild Trout Trust founder and former President, Charles Rangeley-Wilson, highlights the plight of chalk streams in the south east in a guest blog for the World Wildlife Fund.

If you had not noticed, our Research & Conservation Officer, Jonny Grey, has been coordinating an interesting set of guest blogs from young researchers who are currently chipping away at the coalface of academia. These guys are using state-of-the-art techniques to address important questions with regard to trout and other species, broader lake and river ecology, and aspects of management. So far we have had articles on issues ranging from abstraction to watercress, and a whole host in between. Have a quick search back through the blog, here. This is a great opportunity for those researchers to communicate their science to a wider, non-technical audience.

Today, we have a new contribution from Jess Fordyce, a PhD student from the University of Glasgow based at the Scottish Centre for Ecology and the Natural Environment (SCENE). She has been fascinated by the natural environment since childhood, especially anything aquatic.  Her summer holidays were usually spent rummaging around rock pools on the beach for any animal life.  To push this passion toward a career, Jess studied at the University of Glasgow in Marine and Freshwater Biology, where she became particularly passionate about freshwater ecology. Although Jess had not studied genetics, she found using genetics techniques to answer important ecological questions an exciting prospect and hence began a PhD looking at genetic, morphological and life-history structuring in brown trout.

Read about some of her aims, here.