Memorial plaque to Pasco James unveiled at Meonstoke in Hampshire

Following completion of a project to improve a short section of the Meon at Meonstoke in Hampshire, a plaque was unveiled on Saturday 14th January to the memory of Pasco James by his mother, Harriet Poland, and girlfriend Holly. 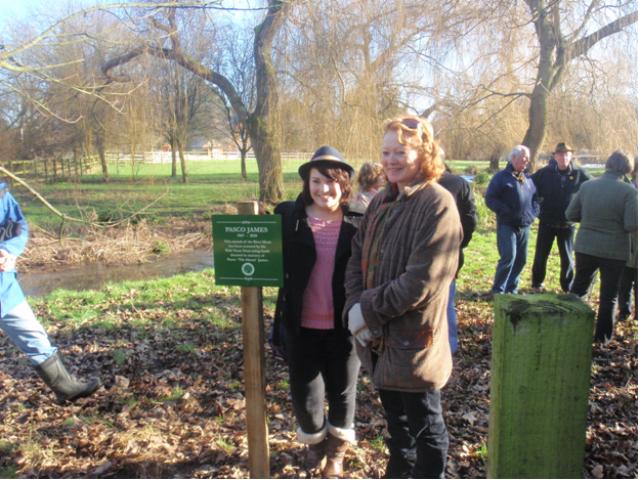 Pasco was a keen fisherman and loved the Meon. He died in 2010 at the age of 22, and his friends and family made donations to the Wild Trout Trust in his memory. The WTT looked for a project that would be a suitable memorial for Pasco — one that was publicly accessible and reflected his love of the river, its trout and all the wildlife that makes the river so special. The Churchwardens from St Andrew’s were delighted to help by giving access from ​‘The Green’.

Pasco’s mother Harriet says; ​“The River Meon was always special to Pasco. As a young teenager, he slaved away one summer holidays on his own to clear a neglected upper reach between East and West Meon. He later worked at Meon Springs Fishery. So he would be delighted with all these improvements at Meonstoke; especially since they will benefit the wild brown trout that he loved so much.”

Much of the river Meon around Meonstoke is a beautiful example of a small chalk stream. The short stretch next to the A32, however, had problems. It was a wide, shallow concrete channel bounded by walls and topped with a weir that presented a major challenge to trout wanting to move upstream to spawn.

A fortunate coincidence of the land beside the river being gifted to St Andrew’s Church, the Environment Agency wanting to improve the weir and the Wild Trout Trust seeing the potential for improvement led to a project to enhance the river channel for the benefit of all wildlife – and especially trout!

The project involved modifying the weir to allow fish to freely migrate and the creation of a new wildlife friendly river bank below. Traditional ​‘soft engineering’ techniques were used in the channel to construct a new section of river bank planted with native aquatic plants that will provide a haven for fish and aquatic invertebrates and also provide habitat for birds and small mammals.

The work was completed by the Wild Trout Trust in November 2011. The changes to the weir were funded by the Environment Agency, and the habitat improvement work was paid for by the WTT’s Pasco James Fund.

This simple, cost effective project is already inspiring the local community to get involved in caring for their river and helping the Meon reach its full potential for wildlife, as well as providing a fitting memorial for Pasco.