Wild Trust Conservation Officer Andy Thomas has spent the last 10 days improving habitat for trout and other wildlife in Suffolk on the River Lark, with the help of some friends and a large 360 excavator. Andy stepped in to take over delivery of the project because ecologist and river restorer, Nigel Holmes, sadly died just before it was due to start in November 2014.

The opportunity to improve habitat for wild trout (and yes, there are wild trout in Suffolk) became apparent to Andy in 2008 when he carried out an Advisory Visit for the Lark Angling and Preservation Society (LAPS) and met Glenn Smithson and Tim Taylor. Glenn and Tim campaigned for seven years to get the project underway, and now, at last, it is being delivered.

This section of the Lark is being transformed from a highly modified, dredged and impounded trapezoidal channel into a more natural river form, with pools and gravel berms, more varied flows and even the occasional bend!

The work has been funded by the Environment Agency and LAPS. Other project partners are the landowner (Elverden Estate) and Suffolk Wildlife Trust. Tim has been onsite to help Andy deliver the project, and both Tim and Glenn, along with James Hooker of the EA, deserve every accolade for their dogged determination to make the project happen in the face of seemingly impossible hurdles.

Below: Tim Taylor looking happy, in spite of finding the river slightly deeper than expected. And he thought he knew the river so well ! 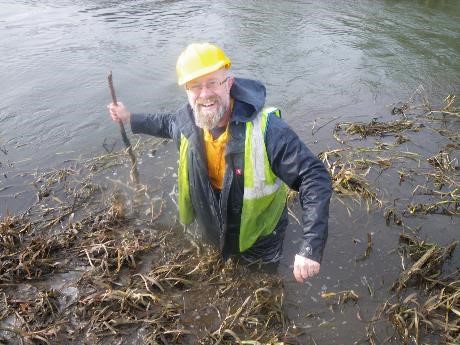 Below: Nigel Holmes’ ​‘dig and dump’ technique was used for creating pools and shallow gravel areas 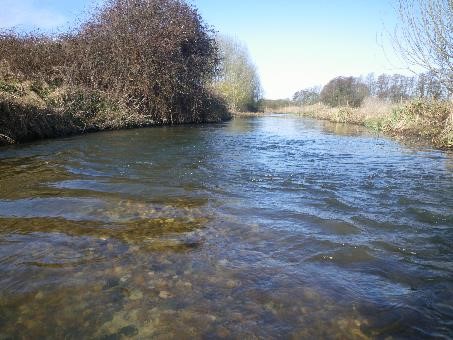