Jon Beer is well known in the fishing community for his journalism which reflect his love of wild trout and fishing, but his background includes writing poems and plays for the BBC and teaching. He has a been a tremendous supporter of the WTT for many years in his role as Vice President, and in that role has given some very amusing talks and starred in the WTT DVD ​‘Rivers: Working for Wild Trout’.

Before bowing out as President, Charles Rangeley-Wilson was presented with the Bernard Venables award for his outstanding 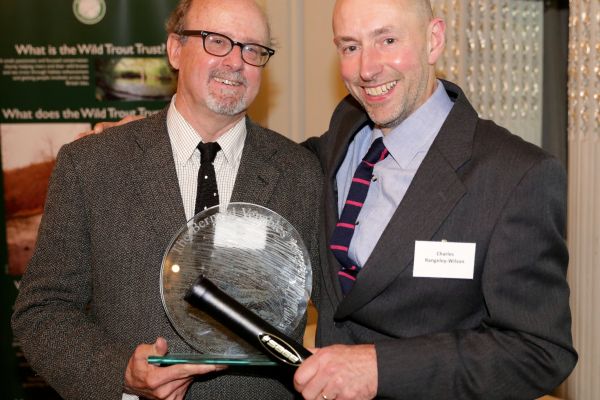 contribution to the conservation of wild trout. The award was in recognition of his vision as one of the founders of the Wild Trout Trust, and for his commitment to improving our rivers through campaigning work with WWF and work with the Norfolk Rivers Trust. Charles was presented with a Sage rod by long term WTT supporter and CEO of Sage, Marc Bale. 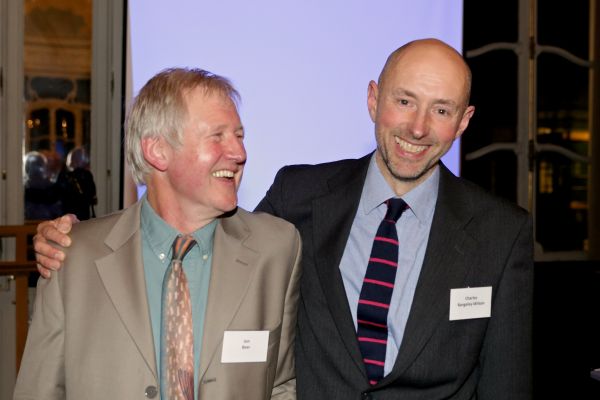 ‘It has been a real privilege watching the Wild Trout Trust grow from humble but enthusiastic beginnings to become the professional, busy and much in-demand outfit that it is today. The Trust does great things for river conservation, supported by dedicated, professional staff and a passionate membership. I’m so proud to have been involved. I’ve done my time now, at the coal face in the early days and more recently as President. It has all been fun. But it is time for me to step aside. I wish Jon good luck, knowing that I’m handing over the role to someone who will serve the Trust brilliantly. So long … and thanks for all the fish’

‘The WTT President has always played a very important role in promoting and representing the Trust and the lot of wild trout across the UK and more widely. Jon has been bringing the pleasures of wild trout fishing, and the human zoo that is attracted to streams and lakes around the world, to audiences for many years. People and the attitudes that we bring to our lives together will make or break the habitats that wild trout rely on. Jon will ensure that we see ourselves with the due mixture of reflection, determination and ridicule that makes it possible to succeed whilst enjoying ourselves.’