To date, while the ecological impacts of invasive crayfish are widely known, the evidence for detrimental effects on fish species in the UK has been equivocal, based upon small-scale and/​or short-term studies with correlative results, and laboratory experiments that may not always reflect impacts in nature. Hence, finally, it is good to see the first robust study of the impacts of our most widespread invasive crayfish, the signal, on the fish and invertebrates of upland streams (although the results do not make comfortable reading). Senior author on the study, Dr Martyn Lucas, has summarised the key findings below.

We used a combination of BACI (Before-After-Control-Intervention) and Control-Intervention studies in the upper River Tees catchment to robustly measure the effects of signal crayfish invasion on fish abundance, and fish and benthic invertebrate community structure, over medium (identical surveys at the same sites in 18 streams in 2011 and 2018) and long (30 years, benthic invertebrates in 3 invaded and 3 uninvaded streams) timescales.

Bottom-dwelling fishes, especially bullhead (a UK Biodiversity Action Plan species, and EU Habitats Directive protected species – but also an invasive salmonid egg eater in parts of Scotland), were dramatically reduced in abundance in invaded streams and stream sections. Recruitment of bullhead collapsed in signal crayfish invaded streams; this is not surprising as signal crayfish and bullhead both use cobble/​boulder refuges and bullhead spawn under boulders, from which signal crayfish tend to exclude bullhead. Bullhead appear to have been extirpated from two study streams invaded by signal crayfish.

Local density increases in larger trout in crayfish-invaded streams might be due to local dispersal from uninvaded upstream reaches, while reduced fry abundance might be due to direct impacts from crayfish or due to indirect food web effects. More work is needed to tease apart these effects and determine longer term impact trajectories.

It is clear that widespread and long-term ecological disruption is occurring in upland streams invaded by signal crayfish, but that these impacts can take many years to be fully expressed, reflecting the timescale for crayfish to fully colonise streams and reach carrying capacity.

The full paper is available open access, and can be found here. 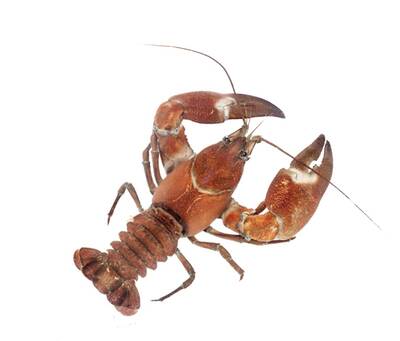